The fifth in a series looking at and debunking specific 'tactical voting' strategies and election narratives from an anti-electoral perspective.

Despite the vast amount of column inches dedicated to who you should vote for, tactically or on principle, and the huge amounts of time, money and energy spent to 'get out the vote,' a great many people won't. They won't vote Labour to stop the Tories, or vote a third party to either pull Labour left or present an alternative to them.

In fact, they won’t be voting at all because (whiny liberal voice) “they just don’t care.”

This graphic sums up the argument of why this is supposedly such a problem: 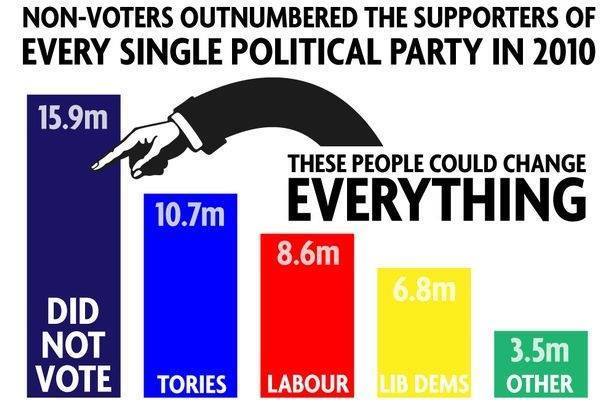 It should be immediately obvious what’s wrong with this graphic. ‘These people’ are highly unlikely to all vote in a similar direction, let alone for the same party, so they’re not a decisive victory for a single party waiting in the wings.

Not to mention that a 100% turnout wouldn’t change the fundamental role of the state as the manager of capital and upholder of social order with a monopoly on violence. Nor would it guarantee that people do anything other than vote, like join unions or get involved in struggles for social change. You know, the stufff that actually could change everything.

If you’re dismayed with the dismal lack of change that comes from elections, maybe look at why electoralism isn’t a vehicle for social change, before you start the rallying cry to ‘wake up sheeple!’

That isn’t to say there isn’t a serious issue to be addressed.

A considerable majority of those who don’t vote will be of that position because they see no point. Even without necessarily having an anarchist analysis of the state, they can see that largely the same shit results whoever gets in. They’re alienated, atomised and disenchanted.

In other words, they’re suffering not from apathy but from the proletarian condition. And though they might not consider themselves ‘political,’ a lot of them will see what the problem is better than those who simply insist that we need to vote Labour.

If they’re white, working class and alienated, then there’s a huge risk that someone like UKIP or the BNP will have some appeal. Not because they’re racist, necessarily, but because the main parties have abandoned them, the left is non-existent on council estates, and these guys are actually talking about jobs, housing and social conditions - even if they are picking the wrong target and using the issues to stir up racism and xenophobia.

But does this mean that we need to get people voting, specifically, or write them off as uncaring if they don’t? Of course not.

Whether someone votes or not is incidental. Apathy isn't defined by whether you put an X in a box every five years but by whether you care about the real issues assaulting our class. Most people do, but feel powerless to do anything about them. That powerlessness is what breeds real apathy, not the unwillingness to vote but the feeling that they can't change anything.

That makes the real challenge not getting out the vote but giving workers confidence in their own collective power to force change in the workplace and the community. For that, you have to think outside the ballot box.

the left is non-existent on council estates, and these guys are actually talking about jobs, housing and social conditions - even if they are picking the wrong target and using the issues to stir up racism and xenophobia.

I don't like the assumption that all that needs to happen is for the Left to appear on council estates to solved everything.

That's not the assumption I was making.

The point is that 'the left' (however you define it) has largely abandoned the working class and isn't there offering solutions - radical or reformist - to the problems our class is facing. So when someone does offer a solution, even if it's the wrong one, it's a lot easier for that to seem credible and gain traction.

A couple of thoughts:
Firstly on the it not making any difference if 100% of people voted, you could make some mention (or maybe just add a hyperlink to some article about…) Australia, where voting is compulsory to demonstrate.

Secondly on the BNP/UKIP bit, it seems to imply that people on council estates are more likely to vote BNP/UKIP, or at least more culturally working class people. And I'm not sure if that's true.

As a lot of their supporters are upper-class and more rural upper-middle-class types. Have tried to have a look around for some data on it and I can't see anything that says anything about Council estates per se. This piece in Inside Housing specifically states that BNP voters were more likely to live in overcrowded, private rented accommodation

This piece in the Telegraph claims that UKIP are the U.K.'s "most working class party", although they don't say what their source is for that claim.

Here is a map of the UKIP vote, and their highest votes aren't in the poorest/most urban areas. They are highest across the South (outside London) and "Middle England".

I'm not sure of the numbers one way or another, but I'm generally wary of the stereotype of white working class people as being prejudiced/racist. Obviously some are but so are plenty of middle, upper-class and rich people: the private school boy who worked in the City amongst the racist Chelsea fans being just one example.

Feel free to surf to my site :: judi online