The following text was handed out at a meeting of communists in London. It proved to be slightly too pessimistic on the question of "provocative actions". It also has a somewhat sociological view of class.

This article about various issues to do with the Criminal Justice Bill was not written for any particular audience but as a way to help me straighten out what I think. Therefore some of it might seem insultingly obvious while other parts are dealt with too briefly. Tough!

The Criminal Justice Bill (CJB) is the latest in a long line of openly repressive legislation brought in by the Conservative government. In the early 80's a lot of legislation was directed at Trade Unions. This forced the unions to keep a tighter leash on their members, in particular the unions are now much less likely to support strikes by workers which are violent or involve solidarity action or are a spontaneous action. In other words, unions now oppose just about any effective action by workers.

Partly due to the relative defeat of the unions (which aren't anticapitalist but are anti-Tory, a bit) and of workers, the most important struggles under the Tories have been fought away from places of work. This is one reason why repressive legislation in recent years has been directed at strengthening police action, especially in cases of 'public order'. The CJB continues this trend but also targets specific struggles and oppositional lifestyles eg hunt sabs, anti-road movements, travellers and ravers. In short there can be no doubt that this legislation is a very specific attack on combatative elements of the proletariat. Radicals, that is those who would be revolutionaries, should obviously be in solidarity with those proletarians under attack and those proletarians who wish to combat the measures this legislation incorporates. But opposition to legislation is problematic. For those who want to see an end to capitalism and the state, all laws are bad and all politicians are our enemies. We have nothing to say to these scum. We sometimes choose to oppose specific laws, but this is not on the level of a campaign for better law, but is practical opposition which makes the law unenforceable. Obviously we want to make all laws unenforceable, but where there is widespread proletarian opposition specific legislation can be defeated outside of a generalised revolutionary situation. A good example of this is the poll tax. Now various liberals and leftists and also 'non-political' types certainly did mount a campaign against this. They wrote letters to their MP's, trying to make them realise they were mistaken, they tried to get Labour councils not to collect (ha ha!), they tried to win over public opinion. But it was not this campaign that defeated the poll tax, it was the widespread proletarian resistance of non-payment, rioting and looting. Some radicals may not wish to involve themselves in opposition to the CJB. They might argue that it is a campaign, or that it is reformist (or probably both). These arguments are just red herrings. Of course there is a campaign against the CJB. So what? There was also a campaign against the poll tax, a campaign in support of sacked printers at Wapping and campaign in support of the miners in 84-85. If a revolutionary situation ever develops there will no doubt be a leftist campaign in support of workers' councils and communism (TUC, Get Off Your Knees!). The existence of a campaign is no excuse for not getting involved in a struggle, we just don't get involved in the campaign.

The argument that we shouldn't involve ourselves in opposition to the bill because that would be reformist, is even more wrong. Firstly the opposition is not reformist. Reformism was a strategy of the old workers movement. Up until the first world war, many socialists believed that socialism could be introduced gradually by socialist legislation and incremental gains won by unions. The first world war divided the tactics of the reformists from the desire for socialism. Everyone who wanted to destroy capitalism left the old movement. Nowadays there is no reformist movement. What is wrong with the Labour party and the unions is not that they use the wrong tactics but that they are capitalist. An example; in the old socialist movement it was believed that a gradual increase in wages would over time eliminate profits. Nowadays the labour movement accepts that pay rises must not threaten the ability of an enterprise to turn a profit. The old socialist movement was disastrously wrong but still had a proletarian element in its theory. The 'socialist' movement of today is not socialist or anything like it.

Some people might use the word 'reformist' to mean something other than a reformist socialist movement. They might say Charter 88 is reformist. Charter 88 wants to introduce a bill of rights and a written constitution to Britain. In other words they want to make the UK's democratic superstructure more like the USA's. But if this is reformist then so are the Tories, who also try to make Britain more like the USA, especially in terms of economic and social legislation. If Charter 88 is reformist then any organisation with any gradualist programme is reformist and the word is meaningless (in which case saying a struggle is reformist doesn't have much meaning either). Having said that, even if there was a reformist movement, the opposition to the CJB would still not be reformist. It is opposition, it is not aiming to turn the state socialist or whatever, if it has any programme it is to stop things getting worse. Such a struggle is in no way reformist. Obviously it isn't a revolutionary struggle either, it is a struggle of self-defence.

A final comment on reformism. The old reformist socialist movement fought battles for more wages and for cuts in hours. In that context these battles were reformist. Radicals were correct in supporting these struggles but not in spreading reformist ideology. Even if the opposition to the CJB was reformist, that in itself is not reason enough to ignore it.

None of this resolves what radicals should actually do. One thing is to adopt the classic anarchist tactic of ignoring the law. That is continue as if no new legislation is introduced and meet any resulting repression head on. This is of course what many proletarians will do anyway. We should publicise this as a course of action. However this tactic is limited. It lets the state make all the running. A more controversial tactic would be to mount provocative actions such as mass trespasses. Realistically these actions are likely to be organised by the campaigners who wish to demonstrate the badness of the law. These actions will be publicised as non-violent events. I am not sure as to how useful these provocative actions will be. They certainly put initiative back in the hands of the opposition but they seem unlikely to strengthen the autonomy or revolutionary consciousness of proletarians. One problem of these actions organised as part of the campaign is that by joining in we may strengthen the campaigners claim to represent the opposition. Similarly we might strengthen non-violent ideology which is in vogue amongst some proles at the moment. Non-violence can sometimes win some gains (many successful strikes are non-violent) but it always involves a tacit agreement with the police. If the non-violent action is very strong and the state does not want to give in, then the police will always use violence anyway, wherever they see it as useful. Respectable middle class campaigns can consistently use non-violence because they do not intend to threaten the state. The respectable middle class support democracy and the rule of law. The respectable middle class and the police recognise each other as supporters. They have class solidarity. The campaign that brings them into conflict is seen by both sides as a minor disagreement. When proletarians come into conflict with the police this is seen by both sides, more or less clearly as another episode in an ongoing inevitable struggle. Both pigs and proletarians use specific struggles to settle old scores. It has been argued by Midnight Notes that the police accept non-violence from the middle class because the police do not want to damage their labour power. I believe this is incorrect; it seems improbable that the police decide which tactics to use by carrying out a marxist analysis of the their opponents' labour power in a given conflict. In any case if they did do this they would attack pensioners and the disabled with the greatest violence and treat teenage proletarians with relative delicacy. This is not what happens in real life.

Non-violent struggles are often appropriate for the middle class but are much less so for proletarians, partly because the police hate us. What this means for the opposition to the CJB is that carrying out or joining provocative actions like trespasses is going to be very problematic. Either we are in danger of just joining the campaign or else we are in danger of getting our heads kicked in!

Our lives against justice and rights - Antagonism

Leaflet produced for a demonstration against the 1995 Criminal Justice Bill.

CS gas and the use of force - Antagonism

Leaflet produced after some protesters were gassed at a demonstration against the 1995 Criminal Justice Bill.
Image 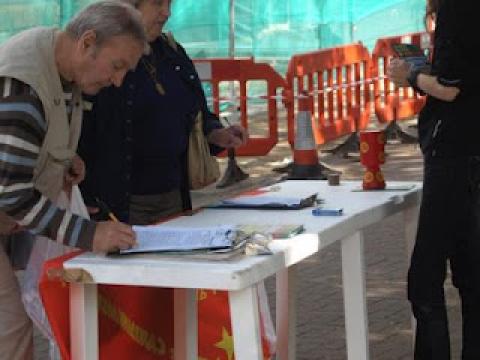 When I think of petitioning in the UK, I think of walking around some town centre on a Saturday, hearing someone on a megaphone ranting how they…