The crisis and the global hunt for calls

Gurgaon is one of the biggest call centre hubs of the globe, having been re-location destination for a lot of US call centre work. Now that the crisis hits the US wage level, calls might be re-routed back up to the global north. A short summary of a recent study and a short workers’ report about house-keeping work in an American Express call centre in Gurgaon.

(Financial Times, 17th of August 2010)
Call centre workers are becoming as cheap to hire in the US as they are in India, according to the head of the country’s largest business process outsourcing company. High unemployment levels have driven down wages for some low-skilled outsourcing services in some parts of the US, particularly among the Hispanic population. At the same time, wages in India’s outsourcing sector have risen by 10 per cent this year and senior outsourcing managers based in the country command salaries above global averages. Pramod Bhasin, the chief executive of Genpact, said his company expected to treble its workforce in the US over the next two years, from about 1,500 employees now. “We need to be very aware [of what's available] as people [in the US] are open to working at home and working at lower salaries than they were used to,” said Mr Bhasin. “We can hire some seasoned executives with experience in the US for less money.” The narrowing of the traditional cost advantage is also spurring other Indian outsourcers to hire more staff outside India. Wipro, the Bangalore-based IT outsourcing company, started to recruit workers in Europe, the Middle East and Africa during the global economic downturn. Suresh Vaswani, joint chief executive of Wipro Technologies, forecasts that half of his company’s overseas workforce will be non-Indians in two years, from the current 39 per cent. India is still expected to retain the overall cost advantage, particularly in more sophisticated software outsourcing. The move to expand operations in the US also comes as protectionist rhetoric against outsourcers rises in Washington. Last week, Charles Schumer, a US senator, described Indian IT outsourcing companies unflatteringly as “chop shops”, a term referring to places where stolen cars are dismantled for their parts.

If you can bare to scroll through various rather tedious semi-racist comments on the article mentioned above, please have a go and click here.

Call Center Worker
(226 Udyog Vihar Phase I)
The call center company is called FIS. About 1,500 to 2,000 workers phone for American Express.In the call center 22 house-keeping workers are emplyed through contractor. In January 2010 we were given 3,600 Rs and the contractor promised to increase the next wage by 300 Rs. In fact he paid 3,300 Rs in February. We work between 40 and 160 hours overtime, each hour overtime is paid 12.5 Rs. Money for ESI and PF is cut from the wages, but we are neither issued an ESI card, nor do we receive PF when we have to leave the job. Instead they cut 1,400 Rs from your last wage. Therefore most people leave after pay-day, which is around the 8th or 9th of the month. You ‘only’ lose 800 Rs outstanding wage this way. 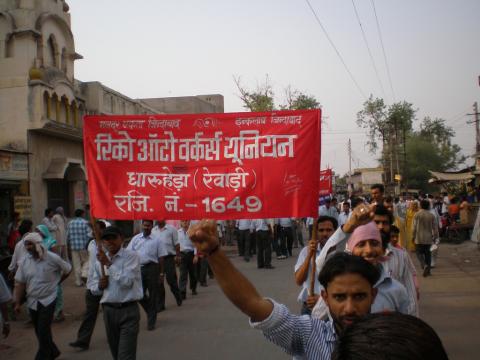 Issues of the Gurgaon workers news letters with news, workers' reports and analysis from the Indian boom region.

English-language edition of the class struggle newspaper produced and distributed in Gurgaon, in the Indian state of Haryana. Contains workers' accounts of their experiences, reports of collective action, and analysis of the intense development of the city. 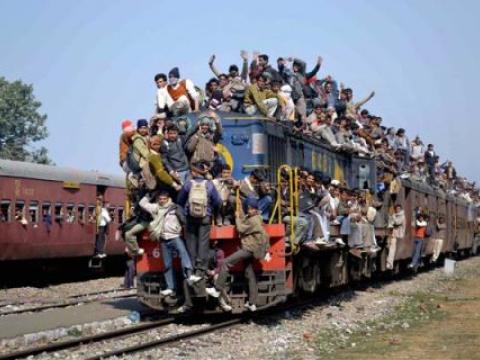