The Fractured Assembly of Automobile Workers

The distribution of Faridabad Majdoor Samachar has recently been extended to the new industrial area of Manesar, near Gurgaon, an area dominated by the automobile industry. We document short reports from automobile workers, mainly within the fractured cooperation of parts manufacturing. Recent struggles like at Rico, Denso, AG Industries or VXL, workers have not been able to extend their disputes along the arteries of this vast territorial assembly line.

Honda Motorcycle and Scooter Worker
(Plot 1 and 2, Sector 3, IMT Manesar)
There used to be joint buses for the 1,800 permanent and 5,500 workers hired through contractors – now they introduced separate bus transport. Both categories of workers used to use the same gate for entering and leaving the factory, now they introduced separate gates. Every worker used to have the right to 2 paid hours monthly for getting the gate pass, now this right has been reduced to the permanent workers – they say that there is too little admin staff, so they try to deprive the workers hired through of the gate pass. The management has recently increased the production target from 1,125 to 1,200 scooters. When workers met the new target the management distributed sweets – only to the permanents, not to the workers hired through contractors.

Munjal Showa Worker
(Sector III, IMT Manesar)
The factory runs on three shifts, manufacturing shocks and suspensions for Hero Honda, Honda, Yamaha. and for spare-part shops. There are only very few permanent workers. There are 500 casual ITI workers and 800 workers hired through four different contractors. They entice the casual workers by promising a permanent contract after five years – actually the workers are kept in a loop of ‘casual worker becoming trainee’ and ‘re-trainee becoming casual worker again’, no one gets a permanent contract. The workers hired through contractors are given enforced ‘breaks’ after six months of employment. The wages for the ITI worker is 4,500 Rs and for the workers hired through contractor 4,214 Rs. The wages are low… If you have to work in a standing position the whole time, then doing overtime means hell. We work 100 to 150 hours overtime, it is paid less than double rate, about 35 Rs per hour.

VG Industrial Worker
(Plot 26 F, Industrial Area, Faridabad)
We produce parts for export to Australia. In the plant only foremen, supervisor and managers are hired directly by the company, all workers are hired through contractors. The workers’ wages are 3,000 Rs, neither PF nor ESI. We work 12-hours shifts. On the obligatory weekly holiday we work 8 hours. Overtime is paid at single rate, wages are paid late. VG Industrial runs another factory on Plot 31 B in Industrial Area, a paint shop. The wages of the 25 workers hired through contractors is 3,000 Rs, neither ESI nor PF. In the GPS press-shop and the Model B press-shop they run two 12-hours shifts, day in, day out. The fixed production target is high, they pressure you a lot, the supervisor swears at you, there are accidents at the power-presses: in one year I have seen 10 workers cutting their hands. In the weld-shop and the packing department they make you work 4 hours extra, after a 12 hours shift. Every month 400 to 500 Rs get embezzled from your wages. The 300 Rs for DA in January 2010 was not paid yet (April 2010).

Haryana Industries Worker
(Plot 318, Udyog Vihar Phase II, Gurgaon)
In the factory about 2,500 to 3,000 workers produce parts for Maruti Suzuki. There is no day off. For 30 working days of 8 hours we get 3,500 Rs. Normal working-times are from 9 am till 8 pm, the second shift from 8:30 pm till 9 am. Overtime is paid single rate. On 22nd of April 2010 a worker cut off four of his fingers at a power-press. Workers don’t get ESI, if you cut your fingers, they make you pay for private treatment. The drinking water is bad, the toilets are normally locked – they open them only in the evening.

AG Industries
(Plot 8, Sector III, IMT)
The 100 permanent workers work on three 8-hours shifts, the 500 workers hired through four different contractors work on two 12-hours shifts. The factory runs 30 days a month. The factory manufactures fibre-side-covers for Hero Honda. The permanent workers get 7,000 to 10,000 Rs, the workers hired through contractors who run the moulding machines get 4,214 Rs. The permanent workers started to set-up a trade union, so the company sacked 5 and later on 13 permanent workers in January and February 2010. After back-and-forth workers laid down tools on 20th of March and gathered inside the factory premises. Permanent workers and workers hired through contractor stood side by side. The company called the police. They arrived in two buses, they first pushed workers out of the factory, then told them to keep a 200 meters distance to the company gate, and they attacked the workers with lathis in order to make themselves understood. One worker ended up with his hand broken, several others had bleeding heads. The police followed workers right into Sector V, beating them with lathis. Later on the police returned and smashed the window-pane of the companies’ security room and of their police car. On the very same 20th of March some workers turned up for the evening shift and started working – the management worked, too. On the next day, the 21st of March, two Hero Honda company buses from Gurgaon turned up, full with workers. They got paint-shop workers from Dharuhera and Gaziabad. New people were hired at the gate everyday… On the 26th of March, the union had a demonstration in Gurgaon. Over 10,000 people came, there was an assembly in Huda Park. They handed out food. But afterwards nothing. We kept on sitting 100 feet away from the company gate. Leaving their victimised 18 work-mates outside, the permanent workers decided to go back to work on 2nd and 3rd of April. The 500 workers hired through contractors pay for ESI and PF, but see neither card nor PF fund number.

VXL Worker
(20/3 Mathura Road, Faridabad)
The management had laid out a trap for yet another wave of redundancies. The number of permanent workers had already come down from 400 to 93, the management wanted to lay off another 46 employees. By instigating they created an atmosphere for a lock-out, which happened on the 6th of February 2010. Not surprisingly the management proclaimed that the workers were engaging in an illegal strike action. In order to move the demonstrating workers away from the factory gate the company cut the water supply on 2nd of April. During February, March and April both union and management had 15 to 20 separate meetings with the higher levels of labour commissioners, no joint meeting at all. The main outcome seemed to be that 7 workers would be sacked, 4 suspended and 41 transferred to other places, but the government official said that the company would not agree. After the 3rd of April even these type of meetings ceased… Therefore the union called for demonstrations on 20th of May to walk from the factory gate to Bata Chowk, on 21st of May to walk from the factory gate to Goodyear Chowk, on 24th of May to walk to the office of the labour commissioner. On 25th of May the labour official and labour inspector came to the workers and told them to stop the demonstrations, to stop causing public commotion and to talk again. On invitation from the management there were talks between company representatives and union leaders on 28th and 30th of May. Us workers still – today on 1st of June – don’t know what the outcome of these talks was. The company produces bomb-timers for the army and other electronic items. The management has replaced permanent workers with casuals and outsourced work to 50 suppliers.

Kiran Udyog Worker
(B-182, Okhla Phase I)
The 110 workers hired through three different contractors are paid 3,300 to 3,800 Rs. They get neither PF nor ESI. The 40 workers who are directly employed by the company get ESI and PF, but the helpers wage is below the minimum, they get 3,800 Rs, the operators get 4,300 to 4,800 Rs. You start working at 8:30 am and finish at 11 to 12 at night. There is a 12-hour night-shift, too. Overtime is paid at 12 to 16 Rs an hour, 100 to 200 Rs are embezzled each month. The factory produces parts for Honda and Denso in Noida. The drinking water is bad, there is only one toilet, people have to queue up. The bosses swear and sometimes hit workers. If you are 5 minutes late they cut one hour from your wages, but shift finishes 10 to 20 minutes late, which is not paid. Tea breaks are 5 instead of 15 minutes. There is a lot of pressure, lots of accidents – but workers have to pay for medical treatment themselves.

Micro Precision Worker
(Plot 96, Sector V, IMT)
They pay you the minimum wage, but instead of 8 hours they make you work 10.5 hours. We manufacture dies for Hero Honda, JBM, Neel Metal and other companies. There is also a lot of sheet-metal work, lots of workers get injured. The managing director swears a lot, sometimes he hits people. The shift runs from 8 am till 8 pm, sometimes you have to work till 1 am. Overtime is paid at single-rate.

Yamaha Motors Worker
(The factory is situated at Mathura Road, Faridabad)
The company hires young workers who have completed ITI as casual labourers. After seven and a half months of employment the companies sends workers on an enforced ‘break’. After that the company hands out ‘Vancancy’-leaflets and sends the former casual workers to a labour contractor. The former casual workers are now hired through contractor and work in the same department as before. The wages are the same, but the ESI and PF numbers have changed. After seven and a half months these workers are officially sacked by the contractor and re-hired as casual workers by Yamaha. Workers work since ten to twelve years in this ‘casual way’ at Yamaha. The work is permanent, the workers are non-permanent. The permanent workers get 25,000 Rs, doing the same work their casual/temp work-mates get 4,734 Rs. The helpers get 4,214 Rs and they have to pay a bribe for getting hired. Yamaha company only issues one T-Shirt for the casual workers, some of the contractors don’t even do that. There are three shifts, in the A-shift mainly permanents work, so in the C-shift mainly casuals are employed. The B-shift finishes at 2 am, that’s when the C-shift starts. There is a lot of trouble in these shifts – and once you are on C-shift you stay, shifts don’t change.

Oswal Electrics
(48-49 Industrial Area, Faridabad)
Around 1,200 workers are employed on 2×12 and 3×8-hours shifts, manufacturing parts for TVS Motorcycles and Orient Pankha. If they make you work double-shift, meaning 16-hours, they only give you 9 Rs extra-money for food – only few get 12 Rs. Overtime is paid at single rate. The machine operators are only paid the minimum wage for helpers.

Northern Tools and Gadgets Worker
(Plot 330, Sector-24, Faridabad)
Workers manufacture parts for Maruti Suzuki on 2×12-hour shifts. They force you to work overtime on Sundays – there is no day off, you work 30 days a month. The 90 casual workers are employed throughout the year, but they neither get ESI nor PF. Their March wage was 3,000 Rs. They said that wages would be increased to 3,500 Rs by April, but they paid only 3,000 Rs in April, too.

Pranav Vikas Worker
(45 – 46 Industrial Area, Faridabad)
The company employs 10 to 12 workers directly and 250 workers through 5 to 6 different contractors. They manufacture heating and cooling coils for Maruti Suzuki, Scorpio and Ambassador. Around 125 to 240 hours overtime, the permanents get double pay, the rest single. If you are forced to work 16 hours non-stop, they don’t even give you extra-money for food. The workers hired through contractors used to get two working uniforms per year, since three years there have been no uniforms at all. Money is cut for ESI and PF, but you will hardly get an ESI card and you have to pay 1,000 Rs bribe to the contractor in order to get the PF fund.

From Supply-Chains to Radical-Chains: Reports from Automobile Workers 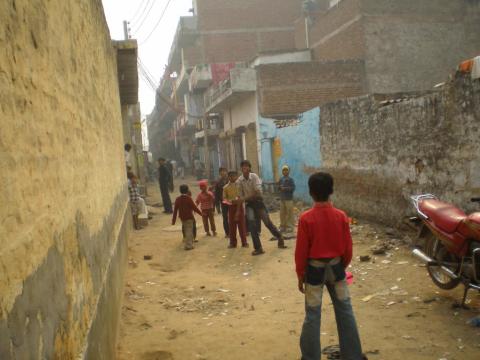