Neo-liberal endorphins are re-ceeding, land-prices dropping, bonuses in the middle-management departments coming down. The city wakes up, looks around itself and startles in fear: who are all these people left out by the rush?! We start with a comment posted on GurgaonWorkersNews expressing the general angst towards the unknown proletarian aliens. The city soothes itself in booze and online-checks on its servants: are they Maoists? In the end we have to create our own ideal world of neo-rich India without the poor: “The Kingdom of Dreams”, a soapy-bubbly image of our gated fantasy.

You can see all comments on this post here:

The millennium city is guzzling alcohol like never before
GURGAON, March 21
Records provided by the excise department revealed that the city sold liquor worth Rs 295.23 crore during 2009-2010. S B Sharma, district excise and taxation commissioner (excise), said: “In 2008-09, we sold liquor worth Rs 165.22 crore. The figure rose by Rs 130 crore this year, which is an all-time high for the city.” Interestingly, consumption of liquor tripled in February this year compared to the corresponding period last year.
(The Tribune)

Verification of domestic help goes online
Gurgaon, May 16
Gurgaon Police Commissioner Surjeet Singh Deswal yesterday launched a programme for residents’ security, under which any resident can place a request for the police verification of domestic help, tenants and drivers online.
“The programme, based on the public-private partnership model, has been started on an experimental basis. A company had approached the Gurgaon police for preparing a database of the floating population, especially the domestic help, tenants and drivers, and the work has been entrusted to it as an experiment. If some more companies approach us, we will allot them other areas,” Deswal maintained. Ashwani Narula, CEO of Hamari Suraksha Software Solutions, said the residents could apply for police verification on the website. Following this, a representative of the company would visit their house and upload the photo, scan identity proof like driving licence or PAN card and fingerprints with a biometric device. The data so collected would be handed over to the police, which would get it verified from the police authorities at the person’s native place.
www.hamarisuraksha.com
(The Tribune)

Red alert: Naxals draw up plan to shake urban India
Gurgaon, March 12, 2010
The Maoists are carrying their fight against the Indian state into urban India. A 129-page Maoist document titled ‘Strategy and Tactics of the Indian War’, seized recently by security forces, states: “Our presence today in key industries is extremely low. It is a pressing need that we enter key industries such as transport, communications, railways, ports, power, oil and gas and defence equipment. This is crucial for the success of our revolution.” The targets: Gurgaon, the Mumbai-Pune and Ahmedabad-Surat industrial belts and the Kolkata-Bhilai-Ranchi-Dhanbad region. “Maoists are trying to infiltrate trade unions of political parties,” a top intelligence officer, who gave Hindustan Times access to the document, said. The Federation of Indian Chambers of Commerce and Industry (FICCI) has urged the government to address security concerns of the private sector. In a report on “National Security and Terrorism,” a task force of FICCI has favoured the creation of a national counter-terrorism agency; a national intelligence grid; Ministry of internal security with a full-fledged Cabinet Minister; and a new intelligence agency to deal with non-state actors. Recognising the role of IT in the war against terror, it called for improving the quality and mechanisms for exchanging relevant information between government and business.

Gurgaon to become key tourist destination with Kingdom of Dreams
Gurgaon, January 21, 2010
Kingdom of Dreams, a 5.66 acre entertainment and leisure hotspot that will showcase Bollywood musicals and boast of an elaborate arts and food boulevard, is set to make the capital’s suburb an important destination for international tourists, says project director Viraf Sarkari.’In India, we don’t have any top quality tourist destination which gives a real taste of the country except for a few like the Taj Mahal. When people have foreign guests and they have to entertain some, they either take them to a five-star hotel for a meal or if one is lucky, there might be a kathak dancer performing live somewhere. With Kingdom of Dreams, we are trying to create that one-stop where a tourist or anyone can have the feel of everything Indian,’ Sarkari told IANS. Culture Gully is a kaleidoscope of India’s cultural, artistic and culinary diversity. Artificial clouds line the ceiling of the place and a pan-Indian cultural ambience will be created in the street-like area.’We are also happy as this project will generate a lot of employment for our people,’ he added.

A text on the textile export industries around the New Delhi area in India, including workers' reports and how one company got rid of permanent workers by repression and taking advantage of the workers' trust in their union representatives. 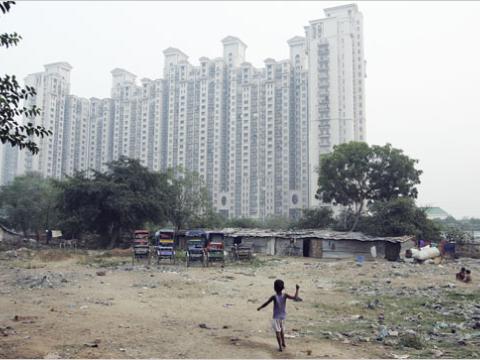 English-language edition of the class struggle newspaper produced and distributed in Gurgaon, in the Indian state of Haryana. Contains workers'…