The following short reports have been collected and re-distributed by Faridabad Mazdoor Samachar in April 2010.

Minimum Wage at the time in Haryana (April 2010): 4,214 Rs for unskilled workers, based on 8-hours shifts, over-time has to be paid double. We document to studies by local/global NGOs about the Asian garments industry. Their idea of a Asian wide-basic wage demand for textile workers seems naïve – given the actual happening riotous workers movements in China and Bangladesh, the rapid ups and downs of currencies in global crisis, the fierce battle over slumping garments markets: the nation state – the institution they address – is neither interested nor in control to facilitate such a well-meaning scheme. Nevertheless, there is some useful information and workers’ stories in some bits of the documents.

Instyle Worker
(378 / Udyog Vihar Phase 2)
The wages are always delayed. They paid the February wages on 25th of March. The 150 hours of overtime are paid at single rate. The drinking water in the factory is bad. The toilets are very dirty. The bosses swear.

Richa and Company Worker
(239 / Udyog Vihar Phase 1)
The 30 women and 40 men doing the thread-cutting work are paid 3,500 Rs, no ESI, no PF, overtime is paid at single rate. Those skilled women workers who stitch pearls or glitter-stars on to the garments are paid the mnimum wage for unskilled work, neither ESI card, nor PF. Amongst others we fabricate garments for GAP. There is one shift in the production department, which starts at 9 am and finishes at midnight. Women workers are called to work at 7:30 am, they are sent home at 9pm or 10pm, if they refuse to stay that long, they are immediately sacked. On 27th of March some male workers said that they will refuse to work till midnight. The incharge and some guys gave those workers a beating and made them stay till midnight. The company pays only the first two hours overtime at double rate. If you are five minutes late for work, they close the door in your face, if you want to take a day of, they swear at you. If you take two or three days of, they keep your company card and say: “Pay us 500 Rs and then you will get your card back”.

Omega Export Worker
(863, Udyog Vihar Phase V)
We work from 9:30 am till 1 am at night, on a regular level. They give only 20 Rs for food, despite the fact that we don’t have time to cook our own food, working these long working-days. The overtime is paid at single rate, though they would have to pay double according to the law. Even the women workers have to work till 8 or 9 pm at night. The company-hired helpers get 3,500 Rs, which is way below the minimum wage, the helpers hired through contractors get 3,000 Rs. Around 150 workers work on piece-rate – they are supposed to work first, the company sauys that it will tell them about the rate per piece afterwards. Of the 700 workers employed in the factory around 100 long-term workers get ESI and PF.

Smarti Apparels Worker
(156, Udyog Vihar Phase I)
We produce leather jackets, every day from 9:30 am till 10 pm to midnight. Overtime is paid at single rate. At the moment there are only 150 workers, but after April the numbers will increase to 1,000. When you return from the village they won’t pay you the last ten to fifteen days you had worked before leaving. When wages were increased to 5,090 Rs, they gave only 5,000 Rs. You give them a 10 Rs, but they won’t give you the 100 Rs note. They always say “later”.

Choice Export Worker
(358, Udyog Vihar Phase II)
The female workers doing emboroidery are paid 3,000 Rs, they get neither ESI nor PF. The January and February 2010 wages were not paid by 20th of March 2010. As a result 10 women workers left the job, but they have trouble getting the outstanding wages.

Kalamkari Worker
(383, Udyog Vihar Phase III)
From our wages each month about 300 to 400 Rs get embezzled. Working-times are from 9 am till 8:45 pm, overtime is paid at one and a half. The skilled tailors get 163 Rs for an 8-hours day, but the company documents say 173 Rs. In the production department managers swear a lot. Money is cut for ESI and PF, but they don’t tell us the PF number, and they don’t fill in the PF form. There are major problems with the drinking water. The toilets are very dirty. We manufacture goods for the company Motherhood.

Security Guard
The company office is in GL Complex in Dundahera, the company is called Yuva Security Group. We earn 5,000 Rs for a 30 days working-month, based on a 12-hours working-day. I left the job after 15 days, because my health was down. When I asked for the money for the 15 days they said that they won’t pay me.

Kachan International Worker
(872, Udyog Vihar Phase V)
We have not been paid our wages for the period of September 2009 tol February 2010. On 12th of March 2010 we filed a complain at the Labour Department, they said that they would send an inspector by 29th of March 2010. The inspector did not turn up.

Gaurav International Worker
(225 Udyog Vihar Phase 1)
They make us work from 9 am till 11 pm or even midnight. On Saturdays we have to work the whole night, meaning that we work continously from saturday 9 am till Sunday 6 am. They don’t give money for food, even if they make you work 20 hours on stretch.Only the first two hours of overtime are paid at double rate.

Lifestyle Worker
(175, Udyog Vihar Phase I)
About 80 workers work on two 12-hours shifts doing computer-controlled embroidery work. The helpers get 4,000 Rs for 30 working-days, the skilled workers get 5,000 Rs to 6,000 Rs. The wages are paid delayed every month. Only three or four workers get ESI and PF.

Gopal Clothing Worker
(274 Udyog Vihar Phase II)
The women workers are forced to work till 10:30 pm, the male workers till 2 am. In the computer-embroidery department workers are hired through contractors. They don’t get ESI and PF, their overtime is not paid – they work four hours over-time each day.

Orion Convenience Worker
(90, Udyog Vihar Phase I)
Workers manufacture leather belts and bags. The contractor has disappeared and the company does not fill in The PF form.

Eastern Medikit Worker
The casual workers in the factories in Udyog Vihar are paid 3,914 Rs, although the minimum wage is 4,214 Rs. 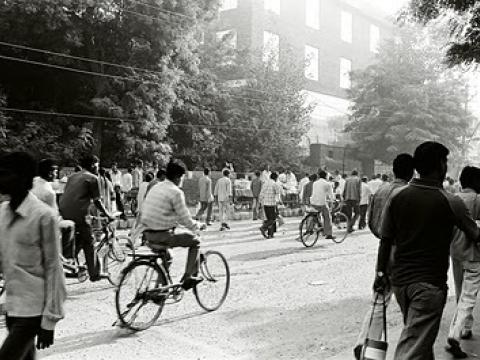 The real estate of urban wasteland in India

Gurgaon workers news on development projects and company policies in India in January 2010. 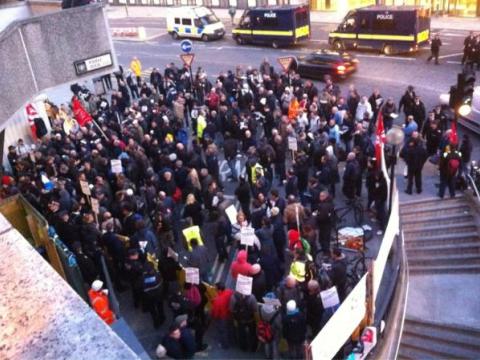 In the continued battle over a 35% pay cut and the tearing up of the national agreement, rank and file sparks battle through police lines to hold…