Delhi's rulers spends billions on the prestigious Common Wealth Games, paying little to those who build and maintain the city. Construction workers already had a riot on Common Wealth sites after one too many fatal accidents. Now street sweepers had had it, they expressed their riotous souls and anger, demanding proper contracts and higher wages. Several cars got burnt, the police had to resolve to warning shots.

“Over 900 temporary safai karmacharis [street cleansing workers] indulged in widespread rioting early on Wednesday morning at Najafgarh in southwest Delhi. They were demanding permanent status and a hike in salaries for all Grade IV employees. Before the stunned and highly outnumbered local policemen could react, the protestors had barged into the MCD’s zonal office, beaten up its staff and smashed furniture. The arrival of reinforcements in the form of PAC personnel and an RAF unit at the spot only added fuel to the fire with the protestors blocking the main Najafgarh Road, attacking vehicles and setting them on fire. MCD officials said the protests had been going on for the past three days. The violence, that lasted for over an hour, began around 9.35 am. According to cops, 17 cars were damaged along with five low-floor DTC buses and four DJB tankers. “A Gypsy belonging to the SHO of Najafgarh, Anand Sagar, was set on fire and got completely wrecked. The SHO himself was injured when the mob began pelting the cops with stones. The Chawla SHO, Sandeep Gupta, too had to be admitted to hospital. In all, over 14 policemen had to be admitted at the hospital. The police said they had to fire eight rounds of tear gas shells even as additional force from at least four neighbouring police stations, besides the RAF and PAC, were despatched to the spot. However, when these shells too could not disperse the mob, cops had to fire in the air. “We fired five rounds in the air to disperse the crowd. We have arrested 14 protestors, four of whom are women,” said a senior officer from the southwest district. Delhi mayor P R Sawhney said: “The protest by safai karamcharis at Najafgarh is unwarranted and we will take strict action against them on Thursday if they do not report for duty. Such incidents take place when senior officials like the deputy commissioner of a zone is not strict with his/her staff. We are starting a cleanliness drive from Thursday and will not let such a protest come in the way of it being successful. If need be, we will take stern action against the safai karamcharis”. MCD has a total of 45,000 safai karamcharis out of which 5,000 are daily wagers. The civic body has been promising these people, hired on a daily wage basis from 1994 onwards, that they would be regularised”.
(The Tribune, 1st of July 2010)

The following short reports have been collected and re-distributed by Faridabad Mazdoor Samachar in April 2010.
Image 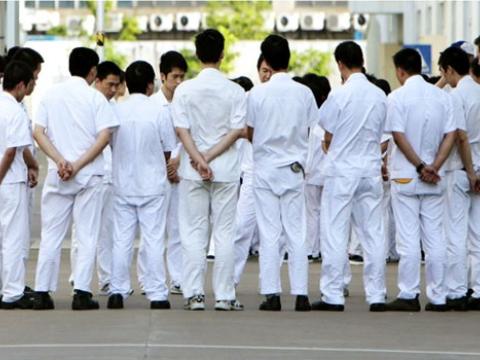 The crisis and the global hunt for calls

Gurgaon is one of the biggest call centre hubs of the globe, having been re-location destination for a lot of US call centre work. Now that the crisis hits the US wage level, calls might be re-routed back up to the global north. A short summary of a recent study and a short workers’ report about house-keeping work in an American Express call centre in Gurgaon.