To citizens of Ukraine and the world: no war in Ukraine!

An open letter from Oleg Yasinsky, a Ukrainian socialist, to his fellow Ukrainians arguing against the slide towards civil war. We do not agree with his essentially liberal nationalist politics, however reproduce this text as a local voice against war.

This letter by Oleg Yasinsky, a Ukrainian socialist, was published on 6 May in Russian on the web site of Spil’ne [Commons], a journal based in Kyiv, and in English on People & Nature.

Suddenly our country, Ukraine, has been turned into an unknown planet. At the start of all this I thought that at least I understood the language. But then, when I listened carefully, not even the language was comprehensible. The very same words turned out to have no permanent meaning: what they meant yesterday was completely different from what they mean today.

Apart from the problem of government, and of the forces that support it, Ukraine has also changed because its people have changed. My love for friends and family alike has not changed, but I already have no idea how to express it. Yesterday, we could laugh together at our political differences. Today, I can not even gather my closest friends around a single table to talk to each other. And I would never have dreamed that I could hear from them the things I hear now.

What has happened to us?

Looking at our country from outside, I see it broken into pieces by big imperialist predators in the course of their endless geopolitical struggle for power. Ukraine has been turned into a theatre of military operations between the decadent and arrogant US-EU empire and the cynical, calculating and equally arrogant capitalist Russia.

With all that in mind, I know that the real power in Ukraine – where we are constantly reminded of loyalty and independence – actually lies with oligarchical groups who were, are and always will be collaborators with one of the foreign great powers.

There is no justification for the military and economic pressure being put on Ukraine by Russia, and no justification either for the forthcoming loan programme of the IMF, which will become a “kill shot” in the head of our already mortally wounded national independence. All that will be left of that independence will be the national anthem and little flags with ribbons of the right colours.

In all the conflicts in Ukraine, we feel the presence of a hidden hand, pushing one part of the population into conflict with the other, to divert attention and energy from the fight against those who are really guilty of taking the country into this tragedy. By sowing death, they provoke the most awful emotions, and by controlling our indignation they push it in the directions that profit them. The next step is civil war – for which the people will pay with their lives, as usual, and those who are responsible will be awarded with new political appointments and with the trophy of a stolen country, as usual.

Maybe now – while tomorrow’s victims are still breathing, and smiling ironically at these “naive” words that “don’t reflect Ukrainian realities” – maybe there is still a little time to do something. Notwithstanding all the gloomy prophecies and all the professional lies of the official press, maybe we are able to do something together.

Before we are Ukrainians, Russians, Australians, left, right, Christians, Muslims, atheists, men, women, etc etc, we are all people. And so we can never, not under any “exceptional” circumstances, justify either the right to murder or the shameful celebration of people’s deaths.

What was the point of three or four thousand years of human civilisation, if in the prehistoric darkness of our times we want to physical destroy another person just because he thinks or feels differently?

The fate of Ukraine must be decided by its own people, not by the governments of the foreign great powers. The authorities in Ukraine, and the traditional political parties – before, during and after the government of Viktor Yanukovich – continue to demonstrate their helplessness and shortsightedness. While the foreign great powers interfere, the current Ukrainian government has done nothing but redivide power between old and new economic groups – without touching the essence of the system against which the people rose up.

If we talk about our homeland, or about independence, the first and basic condition to achieve that is the real power of the people – the democratic election of all authorities and the reimposition of national control over the fundamental natural wealth of the country. All flags, hymns and words are secondary.

We appeal to the wisdom of the people because we have a profound faith in it. Answers to the questions facing Ukraine today will only come from there, not from above.

The popular uprising against the Yanukovich government was aimed against lies, corruption and the overwhelming cynicism of an authority that was controlled by oligarchical groups. I was thrilled by the civic wisdom of those who went peacefully into the streets at that time. I think that people who have risen up today in the south-east regions did so for the sake of the same ideals – and when they came to understand that the new authorities in Kiev do not represent their interests.

On both sides of our divided society are armed groups, who are setting out violently to compel the rest of the country to do what they consider to be right. These armed groups, on both sides of the conflict, have committed crimes. Both sides are being manipulated – politically and militarily – by Russian and western imperialism, who pursue interests that are very far from the interests of the Ukrainian people. But on both sides of our artificially divided population, the absolute majority are honest and decent people, who love their country and are honestly striving for aims the justice of which they believe in.

And these people, real Ukrainian people, need to wake up, to unite, and to put a stop to the fratricidal nightmare that is being forced upon them.

Dear friends, this is my letter – the start of our international campaign for peace in Ukraine. Please read it, and, if you agree – sign it. If you agree to starting working with us on concrete projects and definite ideas, please write to us at [email protected]

■ In response to articles on People & Nature about Ukraine, many people have asked what can be done. Oleg Yasinsky has tried to answer that question in this letter, so I translated it. Please distribute and repost. GL.

■ See also “For an independent social movement! For a free Ukraine” (statement by the Left Opposition).

■ In London, the Ukraine crisis will be discussed at the Real World War I Freeschool on Sunday 18 May. See here.

Submitted here primarily for information? and to illustrate that there is opposition to the emerging civil war from a variety of different political sources, but the underlying politics of this text are clearly of a liberal/left pacifist Ukrainian nationalist variety out of place on this site surely?

No, obviously they really mean it if this is posted without any further critical comment.

The popular uprising against the Yanukovich government [...]

Well, as in the translated texts of AWU the exchange of some politicians and heads of police by the Euromaidan scum is described as a "popular uprising" - a term which implies support for class collaboration.

If we talk about our homeland, or about independence, the first and basic condition to achieve that is the real power of the people – the democratic election of all authorities [...]

Yes, homeland, independence (from the Russians!), elections, democracy and authority are good!

Before we are Ukrainians, Russians, Australians, left, right, Christians, Muslims, atheists, men, women, etc etc, we are all people. [...]

This is so fucking childish and ridiculous I am not going to further comment on this. This "Ukranian socialist" Oleg Yasinsky, AWU, Pussy Riot, Hillary Clinton and Bono should organise a solidarity concert in the Maidan square for the next popular uprising...

This particular strain of pacifist nationalism of 'all the people' can be added to the national defence, which includes supporting an American-led military offensive, of the AWU. I get the impression here or there that nationalism is a prerogative of the right wing. But it's the nationalism of the left wing of capital that is more inisidious in that it wraps it up and attempts to disguise it with verbiage about the working class.

Real Ukrainian people need to wake up, to unite, and to put a stop to the fratricidal nightmare that is being forced upon them

Ukraine: nothing to expect from Europe or Russia

As we promised already a few weeks ago, here we finally publish the English translation of the OCL text, originally available in French on http://oclibertaire.free.fr/spip.php?article1506. Very interesting text especially because of its materialist and non-idealist method that analyzes the movement, its process and its dynamics, only after it tackles its weaknesses, its lacks, the illusions of its protagonists,…

Ukraine: only action of the proletariat can stop nationalist war

Analysis of the situation in Ukraine as the conflict between pro-Russian and Ukrainian nationalists deepens by Trídní Válka. The English translation of this text is not great but we still feel it contains important points.

Statement against both Ukrainian and Russian nationalisms by Tridni Valka (Class War).
Image 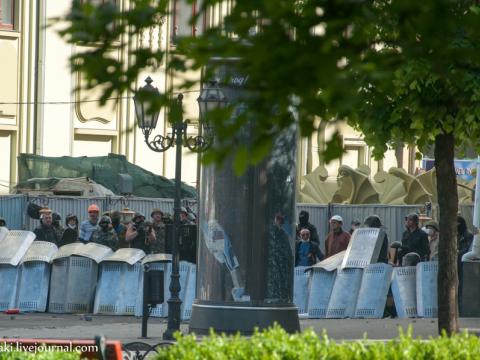