The resumption of nuclear weapons tests in Polynesia by France the mid nineties provoked anger in Tahiti. Tahitians organised a determined campaign against the tests.

French president Francois Mitterand ceased testing in 1992, but his successor President Jacques Chirac announced on June 13, 1995, that France would break a three-year moratorium and conduct eight underground nuclear tests in the Mururoa Atoll (an island of coral near Tahiti). President Chirac claimed that the tests would help to create computer models that would make future testing unnecessary.

Tahitians, as well as much of the international community, were outraged. Many expected the tests to harm the underwater geography and sea life of the atoll, as well as pose health risks to Tahitians. A French map from 1980 shows that testing had cracked the atolls in the past, destroyed coral reefs, and altered land plates. Harmful radioactive material had also been shown to spread via wind and rain. Some also saw France’s decision as a dangerous new step in nuclear proliferation in the West.

Both Tahitians and activists around the world responded strongly to France’s testing announcement. Activists in Tahiti were organizing a response while Greenpeace, an international environmental organization, sent a ship to Tahiti to protest the testing.

On June 29, 1995, the Greenpeace boat Rainbow Warrior II tried to dock in Papeete as 15,000 Tahitian anti-nuclear protesters blocked roads, demanding an end to nuclear testing. Some also demanded independence. Demonstrators carried anti-nuclear weapons banners, as well as independence banners, spending the night at the barricades blocking the roads. Meanwhile, a group of Tahitian protesters delivered a letter addressed to President Chirac to the France high commissioner demanding a local referendum on the nuclear testing. The city shut down. People stopped working to go out and block the streets.

The Rainbow Warrior II, captained by anti-nuclear activist David Enever, was set to enter the Mururoa atoll by July 10, the 10th anniversary of the bombing and sinking of the first Rainbow Warrior in New Zealand during another Greenpeace anti-nuclear demonstration (for more information, see http://www.greenpeace.org/international/en/about/history/the-bombing-of-...). Several Tahitians joined the Greenpeace crew. One was Oscar Temaru, the mayor of Faa’a, a suburb of Papeete, and a leader in the Tahitian independence movement. Another was Pastor Temarama Arapari, a representative of Hiti Tau, a local anti-nuclear coalition of non-governmental organizations led by Gabriel Tetiarahi.

The French navy seized the ship around July 10, 1995 once it entered the Mururoa test site. French warships rammed the Rainbow Warrior II, damaging the ship. Then military personnel fired teargas onto the ship and boarded it, arresting Temaru and most of the Greenpeace crew. Some activists managed to get on a dingy and lock themselves to a rig used to drill holes in the coral reef, but they were forcibly removed. However, other activists launched a dingy from the accompanying ship Vega and managed to evade French capture for at least two weeks. The returning ship was met with support and celebration by demonstrators in Papeete. It is important to note that while many Tahitians appreciated Greenpeace’s involvement, their participation was not without reserve on the part of some Tahitian activists. Gabriel Tetiarahi said that most of the pictures and media attention were focused on the Greenpeace activists, making it look like the tests were taking place in a “human desert.” He said that they did not try to coordinate their activities with those of the Tahitian activists, and “always tried to impose their own point of view.”

Protests continued on Bastille Day (a celebration of the storming of the Bastille prison during the French Revolution) on July 14. Unfortunately, media attention decreased through the rest of July and August.

On September 2, thousands of Tahitians marched arm-in-arm through Papeete to step up pressure on France to cancel the pending nuclear tests. This march was largely organized by the pro-independence party Tavini Huiraatira. Many demonstrators wore t-shirts demanding independence and holding banners with slogans such as “Chirac Assassin” and “No Nuclear Testing.” Some carried the blue and white flag of Tahiti’s independence movement. Even children joined the march, singing songs and carrying banners. This was a four-mile march led by Oscar Temaru and Japanese Finance Minister Masayoshi Takemura. They were joined by fifty other international politicians, including officials from Australia, Sweden, Italy, Denmark, and New Zealand. Officials from Japan brought with them photographs of victims from Hiroshima. 2,000-3,000 people marched on the French High Commission building. Road blocks that had started on September 1 were lifted only to let protesters through.

Temaru said, “Our aim is to get our freedom from this colonial power and this nuclear power – they are linked.” Throughout the campaign, he and other pro-independence activists such as Tea Hirshon, were explicit about the link between the testing and France’s colonial control over Tahiti, claiming that France would not be able to get away with the testing if Tahiti was independent. Some argued that France’s presence in Tahiti was necessary to maintain stability. However, in an interview, Tea Hirshon asserted that this was just “official language that governments play with because they may be about to sign an important commercial treaty or something like that.”

Despite this, the first test was conducted on September 6. Many Tahitians were furious. Two hundred Tahitian workers at the Mururoa atoll test site went on strike at midnight that night in response to a call for a general strike.

A group of protesters, including members of Vahine To’a (literally “warrior women to protect the land”), occupied the runway of Tahiti’s international airport (an airport used both by the French military and by civilians). According to some sources, some protesters tried to set the terminal building on fire. The impetus for this action is unclear. Some say it was led by a “Polynesian political party seeking independence from France,” while others say the fires were actually started by French police to de-legitimize the protests. The police were also said to be firing tear gas into crowds. There are also accounts of protesters driving a bulldozer into a glass wall in the airport. Other accounts include youths taunting police while throwing rocks and Molotov cocktails.

Despite protests, letters, and international actions, Chirac still would not back down, asserting that the tests were necessary.

The second test was conducted on October 1, 1995. There were protests in Papeete, Tokyo, and Paris. Leaders around the world, particularly in Australia and Japan, continued to speak out. Paul Keating, the prime minister of Australia, called on France to stop the tests, as did Takashi Hiraoka, the mayor of Hiroshima. The response in Papeete was somewhat limited because France called in riot police to keep protests down.

Still, President Chirac said his decision to continue testing was “irrevocable,” and that he would not sign a comprehensive test ban treaty until the summer of 1996 after the eight tests were completed.

France conducted the third test on October 27, the fourth on November 22, the fifth on December 27, and the sixth on January 27, 1996. While both Tahitian and international responses to the ensuing tests are unclear, it seems as though protest marches continued in Tahiti, and boycotts of certain French products continued around the world.

After France completed six of the eight proposed tests, President Chirac announced that the tests would stop on February 22, 1996. Some sources say this is largely due to the international boycott of French products. France signed the Nuclear Non-Proliferation Treaty on May 1, 1996.

Most international responses to the testing were focused on the significance of such tests in proliferation of nuclear weapons in the world, rather than on the impacts the testing would have on Tahiti’s people and environment.

Throughout 1995, protesters around the world responded to France’s decision. In Vancouver, B.C., Canada, nine protesters chained themselves to the French consulate, while in Ottawa demonstrators established “Café Bombe” outside the French Embassy. This was a fake restaurant at which protesters served bomb-shaped cakes with sparklers. On Bastille Day (July 14), protesters in New Zealand dumped manure outside the French ambassador’s house. French Polynesians burned a French flag at a rally in Sydney, Australia, and protesters held a candlelight vigil in Fiji.

According to some sources, the most significant international action was a trade boycott of French products by New Zealand, Australia, and Japan. Because of their boycott of Beaujolais wine, 44,000 cases of wine valued at $270,000 were canceled. Tourism also went down 8% in 1995, leading to a loss of $1 million in profits at French Club Med resorts. French aircraft manufacturer Dassault also lost a contract worth $370 million because Australia banned them from bidding within their country.

Australia was careful not to support calls for Tahitian independence, focusing instead on the anti-nuclear testing message. There was a meeting of the Socialist International Asia-Pacific Committee in Sydney on September 1 and 2 to discuss the testing. The New Zealand Labour Party called for French Polynesia to be added to the UN Special Committee on Decolonisation’s list of non-self-governing territories, but some delegates there said that confusing the independence movement and the anti-nuclear movement would make it harder to stop testing.

The Rainbow Warrior I sailed in 1985 to try to stop nuclear testing in the Mururoa atoll (1).

This case focuses on the campaign within Tahiti itself. While it does address international actions and campaigns, it is by no means a comprehensive account of the myriad of actions that happened all of the world in opposition to the testing.
There is also some question as to whether or not the Greenpeace activists were, indeed, partners. As addressed in the narrative, Tahitian activists had mixed feelings on whether or not Greenpeace was completely invested in their campaign. 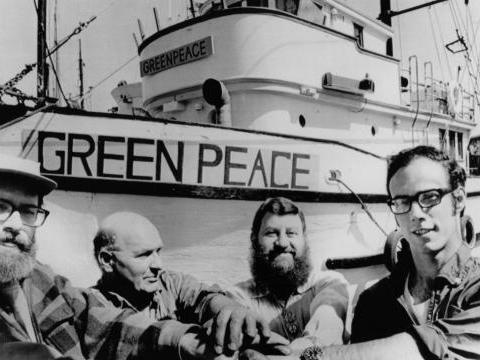 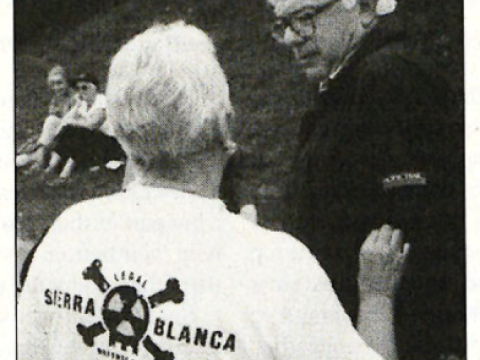 History of the campaign against building a nuclear waste disposal site in a Texan town. The campaign… 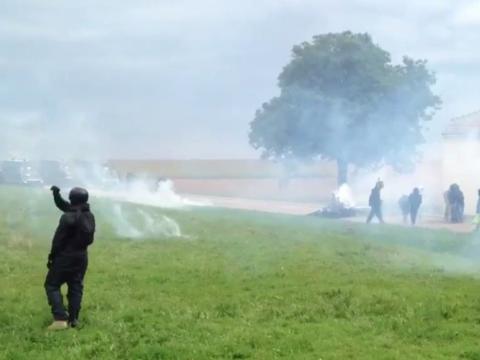 In the French eastern region of Meuse, three hundreds to a thousand people rallied this Tuesday… 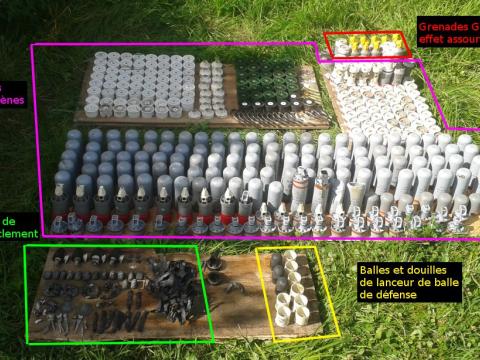