Between the war and the Revolution - Camillo Berneri

Italian anarchist volunteer Camillo Berneri, speculates on the possibility of intervention in the Spanish Civil War.

There are many among us who have arrived at the point of describing the armed intervention of powers which have economic and military interests opposed to those of Italy and Germany.

If these two nations enter the lists with all the forces that they have at their disposal, it is clear that only the intervention of Russia, France and Great Britain reunited could assure Spanish anti-fascism of victory in the war. But it is also clear that before the armed intervention of these powers could crush the fascist forces, enough time could have elapsed to allow the fascists to crush the revolutionary forces.

The English and French capitalist states have an interest in preventing the victory of the Spanish fascists coming to the point at which it is exploited by Italy and Germany, but they have no interest in seeing the Iberian revolution triumph. In the situation in which Italy and Germany were to intervene in Spain with the immediate intention of attacking France (a surprise attack in the western Mediterranean), it would be possible that Great Britain and Russia would intervene immediately. But it such were not the case, it would be possible for the Spanish Revolution to be crushed before the intervention could take place.

We cannot place any hope, as do certain naive and numerous hypocrite, in the paralytic of Lake Geneva. Madrid is being tortured by Fiats, Capronis and Junkers piloted by Italian and German aviators; The Balearics are subject to the terrorising dictatorship of a close-cropped Italian fascist, and thousands of German and Italian mercenaries are landing in Spain with arms and baggage. The Italo - German armed intervention could not be more obvious, more active, more engrossing. The appeals sent to the League of Nations by the Spanish Government found an assembly of spontaneously deaf men ludicrously occupied in tangling up procedural chicaneries.

We cannot hope for more France In the same way as Eden placed in the scales of international justice the independence of Ethiopia and world war, Blum has placed there the liberty of the Spanish people and world war. 'War: that is the ransom. We do not accept it!'

No one hates war more than us, but we believe that the moment has come when the truth of the phrase once stated by Leon Blum will be proved: "We must accept the possibility of war to save peace."

The peace of Geneva is heavy with massacres and ruins. The peace of Geneva: it is an arms race, the crushing of the militarily most feeble peoples, it is the Italian Duce and the German Fuhrer, ever more powerful and always helping in the creation of new Fascist states.

The International Trade Union Federation and the Socialist International continue to associate themselves with this tactic of non-intervention supported by the French and English governments, and during this time, the Fascist intervention has penetrated to the very heart of Spain. The mass of working people must choose: either their intervention or the triumph of Fascism. And they do not move. It is in vain that they repeat: "Spain is the scene of a struggle which, by its consequences, goes beyond the frontiers of the country, because it is in Spain that Fascism is playing its last card."

We must not overestimate the imperialist designs of the Italo - German intervention and envisage them exclusively in relation to future developments in their Mediterranean expansion. Spain is for Mussolini and Hitler an immediate conquest, a current problem. Overcoming the Spanish revolution is equivalent for Italian and German fascism to the conquest of Spain. Fascism victorious in Spain means the revolution broken and the way open to imperialist conquests. This will therefore mean war, the enslaving of the European proletariat, a 'new Middle Ages.'

The French and English proletariat will do nothing to help the Spanish proletariat. It is useless for us to delude ourselves. It would be dishonest to do it to ourselves.

And so it is the Spanish revolution that is in danger, whatever may be the outcome of the Civil War.

A surprise armed intervention on the part of Britain, Russia and France is not likely, but such an intervention would not be at all impossible at the moment when Spain is on the point of dying. This would be the intervention of the lions against the hyenas. It would perhaps be the intervention that would snatch Spain from Italo - German imperialism, but it would be to stifle the fire of the Spanish Revolution.

Already today, Spain is between two fires Burgos and Moscow.

The strength of the Spanish Anarcho-syndicalist movement must not dazzle us. On the day when the army corps of France Britain and Russia intervene after an exhausting struggle between the revolutionary forces and the Hispano - Italo - German Fascist coalition, on that day the Social Revolution will be halted and the way opened to the bourgeois revolution.

Once Fascism has been crushed it is possible that the Anarcho-syndicalist FAI and CNT will continue to fight to achieve their social programme. But in that case the Socialist communist bloc will oppose them.

The Republicans, the Socialist leaders and the Communists are already agreed on a 'constitutionalist' platform. The Executive Committee of the Spanish Communist Party recently declared that in the current struggle it intends to defend democracy and safeguard private property. There is a smell of Noske in the air. If Madrid were not in flames, one would be obliged to recall Kronstadt again. But the policy of Madrid is on the point of triumphing. It has refused arms or money to revolutionary Catalonia in order to place itself in the hands of the USSR which has provided arms and the officers who are destined to control the anti-fascist struggle and to halt the development of the Social Revolution in the armed struggle against Fascism.

Black clouds are building up on the horizon and we are blinded by fogs.

Let us set our lights and hold the tiller with a hand of steel. We are on the high seas and the tempest is raging. But we can still perform miracles. Caught between the Prussians and Versailles, the commune lit a fire which still lights the world.

Between Burgos and Madrid there is Barcelona.

Let the Godets of Moscow think on that

Taken from Anarchy Is Order 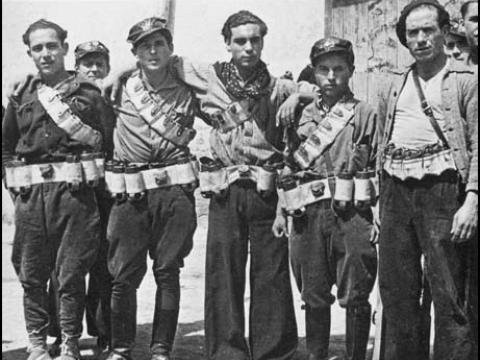 On militarisation of the militias

Interview with Italian anarchist militant, Camillo Berneri, in Spain on the situation of the revolution and war.

Letter from Italian anarchist Camillo Berneri to anarchists in the Spanish… 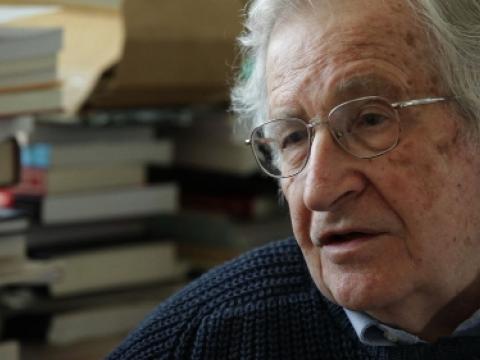 An interview with Noam Chomsky on the Spanish revolution - Jorell A. Meléndez Badillo (2009)

In this 2009 interview originally published in Spanish, Noam Chomsky answers…