Dealing with bullying at work guide

Advice and tips on how to survive bullying and intimidation in the workplace, and ways of dealing with individually, legally, or collectively.

Cuts in staffing and resources, increasing workloads, performance related pay: all have made work more pressurised. The University of Manchester says bullying accounts for up to half of all employment stress. The few studies done show the majority of incidents are by bosses, but it's still important to support people being bullied by work 'mates'. Call it what you will: harassment, aggression, coercive management, intimidation, or things seen as 'just a joke' - all are common labels for what is really bullying. Racial or sexual harassment, or that based on sexuality or disability, may also take the form of bullying. Bullying is any long-standing aggression, physical or psychological, by an individual or group directed against someone who is unable to defend themselves. It is rarely confined to insulting remarks or open aggression, but can be subtle, devious, often taking place when there are no witnesses, and be difficult to confront for those whose confidence and self esteem have been worn down. It is a myth that only quiet or 'weak' people will be victimised since a bully will also pick on the popular or successful if they're perceived as a threat. Widespread bullying by bosses is hardly surprising in world which is structured hierarchically - the rich living off the working class, men dominating women, adults abusing children... Work is similarly organised, to control the behaviour of workers with management positions providing the perfect situation for bullying.

Bullies tend to surround themselves with supporters, spies and 'court jesters' while cultivating allies in senior management. The bully will create rivalries in the workforce, as people anxiously fight to stay in their favour, creating a divisive culture which brings out the worst in people. To be 'in' with a bully can seem the best way to survive, and cover any feelings of inadequacy by displacing these on to others, through siding with the bully's aggression. But as long as a bully feels that they can get away with it they will continue.

A living nightmare
Being bullied makes people feel vulnerable, isolated and frustrated, and may lead to stress related illnesses like constant headaches, loss of weight, ulcers or kidney problems. It affects relationships with family and friends:

"Bill gradually became quiet and withdrawn. I knew that it had something to do with work, but whenever I tried to make him talk about it, he became very irritable. He lost weight, too, and lost interest in everything. He would sleep for hours on end... for three years there was no laughter in our house."

Those being bullied often feel ashamed and that they must have done something to deserve it, which opens them to more bullying.

Spotting bullying
Spotting what's going on early puts you in a much stronger position. Problems often arise when a person is new or recently promoted. The earliest sign is that a relationship at work doesn't feel right: is your boss responding to you in a different way; do you feel put down by belittling remarks or continual criticisms of your work, even though the standard hasn't changed; are you beginning to feel that supposed mistakes are all your fault? Other signs are constant assessment, useless errands, false complaints, persistent humiliation in front of others, and a boss's inability to admit they could be wrong.

A bully will try to get rid of someone they perceive as a threat; not promoting able people, taking credit for others' ideas or work, or alternatively not giving enough work or responsibility and then claiming laziness or lack of initiative.

Surviving
In dealing with bullying it is important not to be undermined and try to remain positive, though this is easier said than done. Try to take responsibility for your feelings and behaviour, keep things in perspective and don't let it dominate your life. However deflated you feel, make time to do stuff you enjoy. Talk things over with friends, many of them will have had a similar experience. You could try self-defence or assertiveness training, as this may help you cope better.

Initial tactics: stand firm against verbal attacks - tell the bully you won't tolerate personal remarks. Keep calm and say what has to be said quietly and coherently, and if they try to shout you down, just repeat yourself and keep doing so until they listen (or more likely walk off). If instructions are unclear, ask for written clarification, suggesting this will improve your performance; this can be useful as evidence. Remain confident in your own judgement and ability. Avoid being alone with the bully if you can. 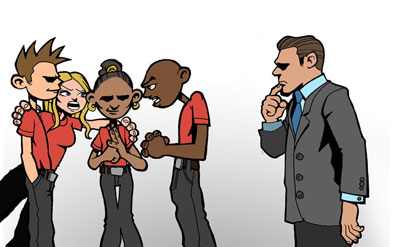 The law
There's no specific legislation dealing with bullying at work. Employers have a legal duty to protect employees' health and consult safety reps about health and safety matters, which includes bullying as it's a workplace stress. Safety reps have legal rights: to inspect the workplace and to take up health and safety complaints, with paid time off for their functions. Bullying involving a sexual racial or disability aspect may be challenged under the Sex Discrimination Act 1975, Race Relations Act 1976, or Disability Discrimination Act 1995. Unions should have policies to deal with bullying, making clear that it will not be tolerated. The complaints procedure should set out on what basis the bully may be suspended pending the results of an investigation. Independent counselling should also be available. Bullying is not just some deviant behaviour which can be eliminated by having the correct policies, but such procedures can form the basis around which to organise (see the excellent Solidarity Federation pamphlet: `Health and Safety at Work' on overcoming the pitfalls and problems of relying on legislation and the unions – email solfed (at)solfed.org.uk for more information).

Fighting back
Check your job description isn't being abused. Keep a detailed diary, including dates, times and locations, of every verbal attack, contrary or arbitrary instruction, or where your competence was questioned. Write to the bully after incidents, challenging them, and keep copies of relevant correspondence and memos. When making a complaint stick to the facts and avoid character assassination. It's probably a good idea to send copies of your complaint to senior management. Wherever possible, insist on a witness, either a friend or union rep, being present at meetings. Tell your doctor what's happening as they will usually give you a sick note giving you time to recover and plan your next move. It's important to state the cause, and name the bully on the sick note as it can be a very important piece of evidence.

Making a complaint may make things worse and lead to increased vindictiveness and being labelled a trouble-maker. Confrontation can be unsafe when it's done alone. Bullying usually affects several members of staff, and the more people experiencing it the stronger your case and potential allies. The staff of one school responded to problems with their headmaster by avoiding further argument, keeping silent, and not reacting. The head's self-satisfied smirk was replaced with a puzzled 'what are they up to now?' expression:

"Although this did nothing to alter the practical problems, we felt better because it was no longer the headmaster calling the tune." 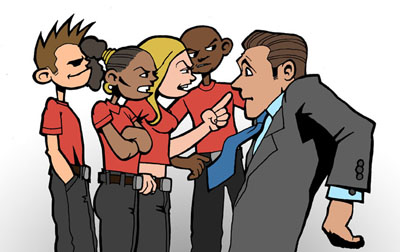 Quietly build solidarity with your colleagues, being careful who you talk to, and when you have enough information use it. Be creative: paste a caricature of them on noticeboards, PCs etc. If desperate deface their notes, property, car etc. with suitably, poignant life questions, but be careful, remember CCTV and don't get caught. If you need assistance you can contact SolFed: using an outside group can be very effective, assuring anonymity, but it's no replacement for solidarity at work.

Last resort
As a last resort you can always resign and try to prove to an industrial tribunal that you were forced to leave due to intolerable conditions. You must be employed for two years and will need a detailed log of the abuse to be able to claim 'constructive dismissal'. Tribunals will examine particular recorded incidents of abuse but their main interest is in whether the correct procedures were followed. A request for an acceptable reference can be built into a winning claim. Compensation varies. In an out-of-court settlement won by Unison, a social worker in Scotland in 1996 received £66,000 after being forced to retire through ill health, caused by bullying by her superior. A health visitor was awarded £5,000 damages in 1997 from North East Thames Community Care NHS Trust, after persistent undermining by a nursing manager.

Organising against bullying can have a knock-on effect and help build wider confidence and solidarity in the workplace as Bob, a postal worker, explains:

"Management are constantly trying to get information out of us so they can make cuts and increase profits but we do everything we can to sabotage their efficiency drives. It's our knowledge and experience which one day will be used to transform our working lives for the benefit of all. In the meantime, we have an ongoing guerrilla campaign on our hands... and that includes against union bureaucrats along with the bosses. Sure, we are not as solid as we would all like, but the basic uncooperative attitude is always there."

Written by the Red & Black Club, Part of the Solidarity Federation.