Barras Threat
Stigma a ruse for gentrification
Plans are afoot to “rebrand” the “closure-threatened” Barras Market as a “specialist destination”; with the Barrowlands music venue as the “trump card” in City Council plans to ‘regenerate’ the area. In the plans, the Barras cafes, stalls and pubs would be marketed together with the Barrowlands venue in a “Cam- den-style regeneration package”.
Councillors say that the moves could boost visitor numbers, and contribute to the expansion of the ‘Merchant City’ into the East End. Councillor Ryan - who has already put the boot into Paddy’s Market - has said that if the Barras moved away from it’s “seedy reputation” and became a “quality market”, it could be used as a “good pull for tourists”.
But we’ve heard all this before haven’t we? The City Council - with the unstinting support of the Glasgow press - are intent on stigmatising the area in order to justify property development and gentrification (the removal of poorer communities for higher rent and rate paying incomers). Running an area down brings land and property values down so that developers can buy cheap and make a tidy profit.
When Councillor Ryan talks of the Barras Market’s so-called “seedy reputation”, he is only doing the same hatchet job he did on Paddy’s Market with the despicable Councillor Matheson. Paddy’s Market was shut down to make way for gentrification and the ‘arts-led property strategy’ in the ‘Merchant City’.
Ryan said: “What we want is to create a mini-Camden Market in Glasgow city centre. We see this as a tourist destination, an arts and crafts market and a cultural venue... we will not be dragged down by a blight which detracts from our efforts to regenerate the city...Paddy’s Market does not fit with that ambition”. Meanwhile, Matheson infamously called the market a “crime-ridden midden”, and was a key force in it’s closure.
Snobbery and disdain for Glasgow’s poorer citizens was expressed most brutally by Ryan: “It is the death-knell for the anti-social element. We want to move all that out. We want to up the bar of what we expect of a market right in the heart of the city. We want to bring in a better class of retail there”.
An Evening Times editorial recently warned Barras traders that if they don’t “clean up things” at the Market, it might “go the same way as Paddy’s”. By stigmatising the Market as “criminal” and “seedy”, the intention of the City Council is the same as it was at Paddy’s Market – to get rid of the working-class from the city centre, extend the middle-class enclave of the branded “Merchant City”, sterilise the city centre for tourists and shopping, and help subsidise the property market for developers by making the area pleasant for affluent house buyers.
Divide and rule is the oldest trick in the book. In a city with 40% below the poverty line, people need cheap goods and a place to socialise and chat. The Barras is one of the few public places where working-class people still gather in the city centre. The problem is not the people who are forced to bend the rules to make a living, but the Councillors who have flogged the city centre for property development. No one is saying the Barras doesn’t need change, but Camden is an expensive yuppie market for tourists - change must come from the people who live and work in the Barras area, not from above.

View from the Ground
Interview with Billy Gold, publican of the Heilan Jessie.
What has happened historically in the East End?
The east end has been abandoned for years and years, and even from the view of commercial exploitation and tourism, the council has slipped I think. We’ve got drug rehabilitation, alcohol rehabilitation dotted all over this area. How long does it take the council to start looking and say - ‘we need practical solutions’. From Glasgow Cross to Park- head Cross there’s virtually no employment of any sort for any- body. Drive down through most of the Gallowgate; it’s just derelict shops, waste ground, horrible houses; just horrible conditions for anybody. So, I do think in the last 25 years, we’ve not moved forward an inch. We’ve not seen any tangible improvement.
What about talk of a “Camden Style” regeneration package for the area?
That sort of thing has been tried before...a couple of our councillors have been jetted to places like Italy and they’ve all come back with this talk about cafe culture. This is northern Europe! Cafe culture doesn’t work where it rains all the time and is cold all the time. Maybe it’d be nice to have a couple of nice spaces for a beer or a nice cup of coffee or whatever but it seems to me that’s all the Councillor’s want, to make things more up-market...
I think there’d be a danger if they gentrified and made the Barras kinda ‘arty-farty’; there’s a grave danger that it would alienate the vast majority of the people who work in this area if it got too gentrified. There’s also the danger, if people move into the area and start making house prices ridiculous, that local people fortunate enough to have a job can’t afford to buy a house in their own area and you have folk moving out. And that’s what hap- pens if you’ve not got a resident population with a history. You have transient people living here, folk living here cause it’s hip to live here. That could damage the area as well.
There’s been talk of extending the ‘Merchant City’ (MC) east into this area. How do local people feel about the MC?
The MC’s nice, and people - everyone in the pub - refers to this area as MC East, ‘ooh...we’re Merchant City East!’ and it’s a standing joke. I think one of the things that ordinary people in this area think is, “the MC’s no for us, its a wee bit urbane and no for us and there is a sense of alienation”. There’s a wee tiny bit of resentment that some guy has woke up one morning and has come in and stole a bit of Glasgow. Somebody has stolen a big bit of Glasgow and replaced it with a big bit of Edinburgh. I think people would resent this area becoming ‘MC East’ if they were just going to be the waiters and the sweeper up’s, where all the beautiful people will come in and colonise the place. I think there would be a dynamic there and it wouldn’t be very healthy.
What would you like to see here?
I’d like to see some of the stigma of living and working in this area taken away. I’d like to see employment; I’d like to see some of the cash that gets thrown about going towards bringing employment into this area. Not just a few extra people in McDonalds; I mean real employment in this area. If I could have one wish, I would say ‘get some employment into this area and get rid of all the big gap sites, the big overgrown gap sites’.

Battling Betty
15/01/1931 — 05/05/09
Betty McAllister was a potent mixture: formidable woman standing up for the rights of her neighbours in Calton, PR genius, and loving wife and mother. Her seafood shop, which used to be in Bain Street, was her ‘office’ from which she held court, fighting the injustices she saw in her beloved Barras and ‘The Calton’.
Betty’s work in the community started when she got involved with the regeneration of housing in the East End in the 1980’s, setting up the first resident’s association in Calton. In that role, she helped stop the authorities from putting in ‘Lego boxes’ and knocking down the existing houses that are part of the area’s history and heritage
Betty’s plans for Calton ranged from the very practical ‘Betty’s Club’ at the Calton Neighbour- hood Centre which provided after school activities and day trips for local kids, to matters of personal pride for Calton, including fiendish plans to repatriate the statue of cartoon character, Lobey Dosser, from the West end of Glasgow and return him to his ancestral home in Calton Creek!
Always ready with stunts to draw wide attention to issues; including road traffic safety, the closure of St Mary’s Primary Schools, and the deterioration of the People’s Palace, Betty’s motto is one which still rings true today: “If you shout loud enough, they’ll listen”.
Depending on where you stood on the issues, Betty was either a ‘champion’ or ‘argumentative’. In 1990, when she heckled Pat Lally – then the despised leader of Glasgow District Council - about proposed developments at Fleshers’ Haugh on Glasgow Green, she won widespread applause for speaking truth to power.
She was famous for publicly cutting down politicians who think they know more than the ordinary folk who have grown up, lived and work in their areas. Her daughter Daniella, said of her mum: “She wanted to make a difference and she didn’t want city planners telling her what they were going to do - she was going to do it”.
It was a sad day when this strong-willed, resourceful, in- dependent woman was lost to the Calton. There isn’t one born every minute who’ll go up to Thatcher and say to her face: ‘Mrs Thatcher, you can stick the poll tax where the sun don’t shine’ !!! 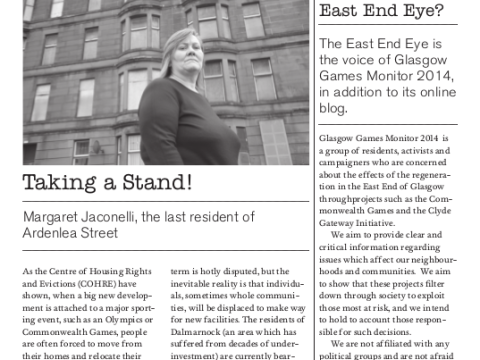 The East End Eye is the voice of Glasgow Games Monitor 2014, a group of residents, activists and campaigners who are concerned about the effects of the regeneration in the East End of… 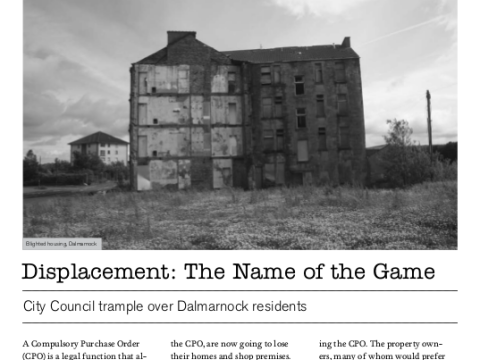 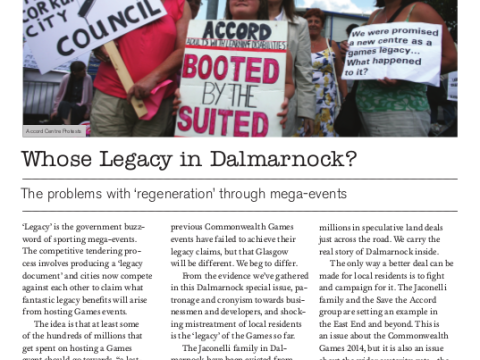 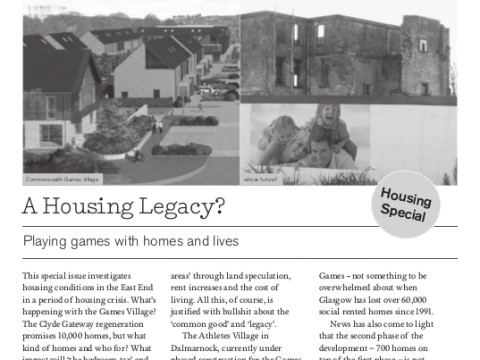