The persistent outbreaks of workers' anger continue in the Bangladeshi garment industry. A strike escalates...

Savar, central Bangladesh (a center of textiles and agriculture); for several days last week 1800 workers at a sweater factory in Ashulia had been striking in demand of a pay increase and settlement of outstanding wages. Management finally agreed to the demands on Thursday. But on returning to work on Saturday (27 June) three workers who had taken leading roles in the agitation and negotiations were told they were sacked "on charges of leading the demonstrations". On learning this the workforce immediately left the factory to demonstrate and to demand the reinstatement of their three fellow workers. This led to fierce arguments and then scuffles with the factory bosses, two of whom were reported to be beaten up.

Soon after police and Ansars (a civilian volunteer defence group, an auxiliary to the professional security forces) arrived; police began firing tear gas shells to try to disperse the demonstration, which now blocked a main highway - workers responded with hails of stones and bricks. Then the Ansars opened fire with live rounds of bullets into the crowd. Two workers were shot - one, Al-Amin, 26, died later at 12.30pm in hospital.

The Ansars later claimed that they were forced to fire as workers were trying take their weapons from them. This could well be just a convenient excuse for their killing; but, considering the consistently high level of (often violent) class struggle among Ready Made Garment(RMG) workers, it would not be very surprising if workers were prepared to take such action. The common practice is for striking RMG workers to walk out of their factory and make a procession around other nearby factories in the industrial zone to bring out other workers in solidarity. One wonders what would develop if such a procession was to be led by a group of armed workers with recently seized guns...

As news of Al-Amin's death spread, during the afternoon the workers' numbers swelled; joined by workers from other factories striking in solidarity and then further swelled by other RMG factories being closed early by bosses due to fears of the unrest spreading to their premises. The insurgent crowd then occupied the Ashulia factory, smashing windows and wrecking offices. They remained in occupation an hour and a half, during which time they set fire to the the factory's warehouse and torched a company pick-up truck.

The workers then broke into the hated Ansars' camp situated in the factory grounds - and promptly set fire to it. In response the Ansars fired more rounds - enraging the growing numbers of workers as factory property continued to be attacked. The 'officer-in-charge of Ashulia police station, said, "We picked up the Ansars personnel along with their arms to ease the situation and save them from the angry mob."'

40 workers and police were injured in the clashes. The surviving shot worker remains in critical condition.

The Ansars in Savar have a history of clashes with RMG workers in recent years and are sometimes deployed within factory compounds as a semi-permanent para-military presence (see, for example; http://libcom.org/news/bangladesh-garment-workers-attack-factories-thousands-wildcat-riot-11082008).

The police eventually brought the unrest to an end, aided by deployment of the notorious Rapid Action Batallion (RAB; elite anti-crime/anti-terrorist paramilitary force famous for summary executions - known as "crossfiring" where victims are routinely reported as 'killed in crossfire').

As they have admitted, the RMG unions really have a very limited influence over workers' struggles (see quotes here, under 'unions admit "no control"'; http://libcom.org/news/bangladesh-militarized-factory-visions-devouring-demons-capital-15092008). Most garment sector struggles are expression of a quite capable workers' self-organisation. But the unions have organised protests against the Savar killing to take place the following day (Sunday) across the country.

This incident is only the latest in a series of recent similar clashes in the Bangladeshi garment sector. As the economic crisis hits harder one can expect more of the same - and a likely escalation... 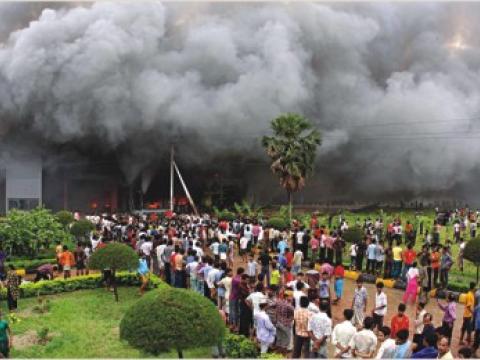 The mass unrest in the garment industry continued on Monday (29 June) for a third day...
Image 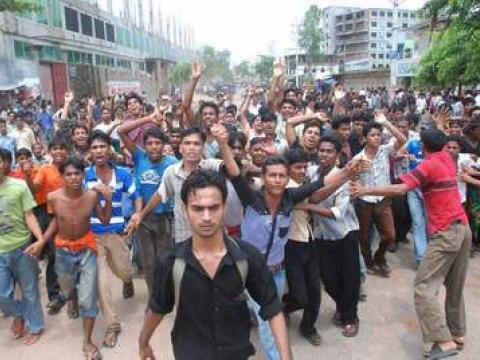 A survey of recent unrest in the garment industry, as agitation for a greatly increased minimum wage…
Image