German Artisans and Artisan movements in the 1840s

A late 19th century carpenter's workshop with its original tools.

An article about the conditions of the working class in the German States and Vienna in the 1840s and the early beginnings of class consciousness it provoked and its expression in the 1848 revolutions.

Artisans and Artisan movements (Germany) The dissolution of the corporate society at the end of the 18th century and the formal dissolution of guilds as compulsory organizations (see Guilds (Germany) in the first half of the 19th century deepened the conflicts and differentiations among artisans. In addition to the urban artisans, the rural craftsmen enjoyed an economically significant importance. Most of the rural artisans were recruited from among the village poor and were principally engaged in coarse, simple operations while in towns the division of labor had led to a strong segregation among the various trades. In towns the artisans were the most important social stratum; they dominated by their sheer numbers those employed in industrial concerns, but because the establishments termed factories varied so greatly in size, any precise division into "industry" and "craft" is hardly possible. Since the guilds had lost their compulsory status controlling employment in trades, the importance of non-guild craft rapidly increased in importance. Yet the degree of importance varied greatly among the trades of the non-guild artisans, whom guild masters and journeymen often despairingly labeled as bunglers. In the mid 1840s fewer than twenty percent of cobblers and thirteen percent of the master tailors in Berlin belonged to a guild, while more than eighty percent of Berlin bakers remained organized in a guild. Since the beginning of the 19th century the differences between individual craft branches deepened; among them included several groups of the textile manufacturers, including weavers and silk throwers, as well as the clothing finishing trades like tailor and cobbler. Other craft associations, above all the foodstuffs trades of baker and butcher and construction workers, masons and carpenter could maintain their economic position or even profit from industrialization. A number of indicators reflect the degree of difference between the individual industrial groups around 1848; in addition to great differences in wages (cf. "Journeymen in Germany") above all the size of workshops as well as the extent that masters were liberated from the tax on trade varied greatly. For example, in Berlin in 1846, among cobblers, tailors, lace makers, and glove makers, for every master there were twenty journeymen as helpers, among the masons twenty. the carpenters fifteen, and the book publishers sixteen. The social differentiations between the various trade branches is especially well reflected in the number of masters who were exempted from payment of the tax on trades because of poverty; in Berlin during the 1840s all the bakers and butchers, ninety percent of carpenters and seventy per cent of masons had to pay the tax on trades, thus were relatively better off in comparison with the percentage in the crafts where only about ten percent of the mass of proletarianized small masters were concentrated like the weavers, chair makers, potters, etc.

In the months of the 1848 revolution the differences increased in intensity, especially among the mass of impoverished artisans who were especially effected by the agrarian crisis of 1846-47 and the trade and financial crisis that set in early in 1848 (see "Economic crisis in Germany"). The three above mentioned line of differentiation within crafts were to a great extent independent of political developments which ran parallel to social economic process which marked industrialization and development of a civil society. However, the revolution of 1848 deepened a fourth line of delineation, the politically explosive and tendencious, to an unbridgeable conflict: against the background that (a) for a growing number of journeymen and helpers the status of journeyman was no longer a transitional phase, rather had become a permanent situation; since the end of the 1830s numerous artisan journeymen at least found temporary employment in factories and thereby personally experienced modern salaried labor; (b.) non-monetary forms of wages decreased in importance and purely salaried remuneration replaced other forms of recompense; (c.) ever fewer journeymen were given lodging and board in their master's household; (d.) in the decade before the revolution in a number of market branches the size of enterprises grew, some dramatically, which were marked often by consciousness of a common employment, the traditional master-journeymen relationship in 1848 tending toward an impersonal small employer-salaried worker situation. The development was sketched out already in the years before the revolution. In 1848, freedom of association, assembly and press exposed openly the divergent interests of masters and journeymen, which were now freely articulated. In most craft branches the journeymen formulated their demands in petitions; to the degree that masters did not willingly give in to their demands, the journeymen usually successfully achieved with strikes. Industry-wide cooperation, and some cases solidarity between trades, strengthened not only the self confidence of the journeymen, but also allowed the growth of a sort of class consciousness among many of them, while, on the other hand, the masters drew together more resolutely to manipulate the remaining guilds more openly than before in their interests. This social conflict was noticeable and politically charged within the crafts by separate, inter-regional congresses of masters as well as of journeymen and by the journeymen engaged in industrial work at the end of August founding the "Worker Fraternization"(Arbeiterverbrüderung), the first labor organization in the German region to include workers in several trades (see "Journeymen's Congresses in Germany"). It was symptomatic that a great number of journeymen's groups referred to themselves as "worker" or "employee" and the masters as "employer".

The social-economic cleft between the impoverished mass of artisans and those in prospering trades also took on a political dimension in the revolutionary year. Among the dead, wounded and imprisoned of the Berlin barricade fighters of March 18, 1848 for whom we have a record of profession, more than half were journeymen and only eight percent were masters. Those in the proletarianized mass industries like tailors, cobblers, joiners, weavers, etc. were disproportionately represented. Moreover, not by chance, the tradeless journeymen, impoverished masters of the textile and clothing trades, and unskilled day laborers comprised the largest group of those unemployed in earth moving at public expense during May and June 1848 forty-one percent in Vienna and thirty-five percent in Berlin. The Viennese and Berlin relief workers in turn strongly placed their mark on the revolution in both cities. Finally, the journeymen of mass industry, the book publishers, and machine workers of the large cities called for radical demands like the setting up of national workshops, the creation of a ministry of labor with representation chosen by workers, and the obligatory creation of workers' boards in industries; moreover, they included the main contingent of participants in the early socialist movement. Above all, journeymen's groups as well as the impoverished and former small masters also pressed for the further development of a second, social revolution from mid-year 1848 on. The proletarianized industrial worker thus belonged to the most important carrier of the revolution, whereas a great majority of the prosperous masters from the summer of 1848 on sympathized with political conservatism and often welcomed the defeat of the revolution.

A critical interview with a paid organiser of the German ver.di union about their organising work in the security industry.
Image 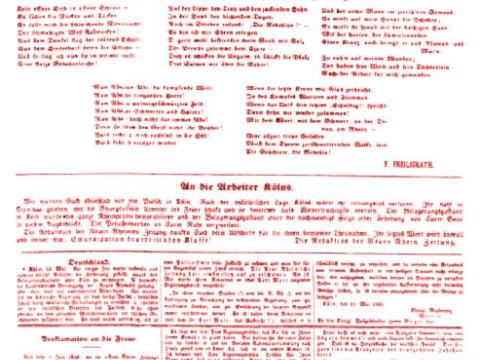 A short history of the newspaper Neue Rheinische Zeitung edited by Karl Marx in the 1840s and the role it played in the events of the day.
Image 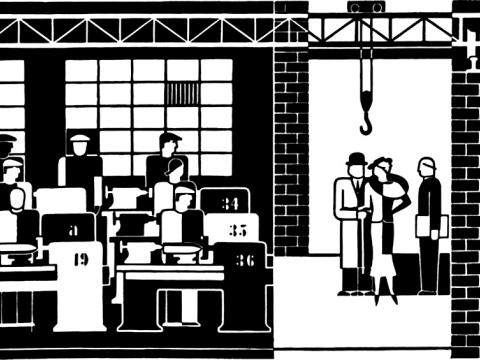