Here in the UK we face a difficult situation in the health sector, people are tired, they survive on low wages, they fear changes such as privatisation. We haven’t found our own ways yet to do something about this. Health workers in Argentina don’t have it easier than us. Their conditions are similarly bad, if not worse. But they have found ways to make themselves heard.

Read more about this below. If you are interested in discussing our situation as health workers and the current pay campaign, get in touch: [email protected]

What started as a health workers’ dispute has turned into a regional uprising. Since early March, health workers throughout the province of Neuquén in Argentina have been staging unofficial strikes and roadblocks, demanding a pay rise higher than the miserable deal agreed by the government and the unions. They also demanding better working conditions to face what is expected to be the second wave of coronavirus in Argentina. The health system is not up to the task. Increased layoffs of critical care nurses and emergency paramedics over the past year have exacerbated staffing shortages. This dispute has turned into a bigger movement, and a self-organised one at that. Workers have been setting up a strike fund and holding open meetings at the hospital entrances. After being ignored, the movement has escalated their tactics by using roadblocks to obstruct the province’s oil and gas production.

Background of the dispute

In December 2019, the provincial government froze public sector wages. This meant a 26% loss of purchasing power for health sector workers in the midst of the 2020 pandemic. The vaccination campaign, which began in early 2021, is slow to get off the ground while Argentina is caught up in the second wave of the pandemic.

Why has it kicked off now?

On February 24th this year, the provincial government offered a 12% wage increase to health workers. On February 25th, the union’s grassroots assemblies in about 20 hospitals and health centres rejected this proposal. Union General Secretary Carlos Quintriqueo ignored this vote, and on Feb. 26th, the union leadership accepted the government’s deal. This fierce betrayal of union (ATE) representatives was the straw that broke the camel’s back.

On March 2nd, a large inter-hospital meeting of health workers was held in the centre of Neuquén, the provincial capital. They decided to demand that wage negotiations be resumed, a 40% increase for 2020 and an adjustment in line with inflation for 2021. They also decided to coordinate their demands with the teachers’ union, ATEN, and to draw up a joint action plan. ATEN had rejected the same wage proposal a few days earlier, and decided not to resume classes on March 3rd.

At the same time, various conflicts were spreading in the region. Social movements blocked rural road bridges and other points for an increase in support programs; schools throughout the province made demands of the state; and the feminist movement took to the streets against the femicide of Guadalupe Curual in Villa La Angostura. On March 10th, self-organized health workers, opposition to the ATEN union leadership, other public sector workers, workers in the self-managed tile factories, and social movements came together in a demonstration that ended at the main government building. On March 12th, health workers with the union of justice workers (SEJUN) blocked the bridges between Neuquén and Cipolletti. Meanwhile, ATEN maintained a protest camp in front of the government building. There was still no response from the political side.

On March 16th, the provincial government agreed to add 3% to the wage increase, for a total of 15%. At the same time, the health workers rehearsed a first blockade of the oil route, the roads through which the project of Vaca Muerta is carried out. (Vaca Muerta is an oil shale deposit where they’re fracking). The government continued to refuse to meet with the self-organized workers. ATEN’s union leadership pushed through the approval of the wage proposal, even though it meant a significant loss of wages. On the same day, the Cerámica Neuquén tile factory (which had been taken over by the workers*) was again threatened with eviction and auction.

On March 24th, (the anniversary of the 1976 coup), thousands again took to the streets. In addition to the usual demands for commemoration, truth and justice, health was big on peoples’ agenda, demonstrating the broad legitimacy health workers now had amongst the wider population. More roadblocks, this time to famous tourist destinations, resulted in more clashes. The traffic chaos and growing criticism of a continued lack of response from the government emboldened health sector workers to expand their struggle further.

The Neuquén area is known for its oil and gas industry. On April 7th, a series of indefinite blockades began at strategic points along the oil route, focussing on Añelo, the neuralgic centre of Vaca Muerta. Through the roadblocks, workers have been mainly targeting the trucks transporting fuel from the Vaca Muerta refinery, while letting the rest of the drivers pass. The blockades have made it difficult to drill new wells, forcing the closure of smaller wells, and causing problems at processing plants that threaten Buenos Aires’ gas supply.

As the government continued its silence, the number of blockades increased to twelve by April 10th. For the last two weeks, 30 roadblocks have paralysed the activities of the petroleum industry in Vaca Muerta.

In parallel, a meeting was convened with social movements, unions, parties and local organizations in the city of Neuquén at the Castro Rendón Hospital, the largest hospital in the province. A few hours after this meeting, the state energy company of the province, EPEN, cut off the electricity to the worker-run Zanon-FaSinPat tile factory.

At first, the authorities had maintained that pay rise negotiations would only take place with the unions and refused to meet with the strikers. Finally, after weeks of unofficial actions, the provincial government agreed to meet the protestors but after a couple of meetings, which the workers considered unproductive and a waste of their time, they decided to leave the negotiation table until there was an acceptable pay rise proposal from the government.

“We left our answer on the table and told them that we are not going to accept any more teasing, as they did yesterday (Friday 16th) when they kept us for 9 hours in sterile discussions. When they have a proposal for an increase in the basic pay, they can call us and we will sit down to discuss it. In the meantime we will continue to hold roadblocks and deepen the measures.” said one of the representatives of the workers, after last Saturday’s meeting.

Throughout all this, the Mapuche communities in the Añelo area have been joining the pickets. The situation with the truck drivers has gone from conflicts and counter-pickets to solidarity. Workers have joined in solidarity and stayed outside the Ciudad Judicial where the negotiation meetings were held.
Meanwhile, almost all the union leaders not only do not support the strike but even openly attack it, like the leader of ATE Neuquén. The union leaders aligned with the Kirchner government, who went so far as to consider that it should be repressed, forcing all the sectional delegates to sign this declaration, which some of them denounced.

Despite the position of the union leaders, on the roads and in the streets of Neuquén, there is massive participation of health workers and massive support of teachers, as well as the active support of various militant unemployed movements. In addition, most of the oil workers and truck drivers appear to be getting closer to the health workers, despite the significant physical and monetary wear and tear that being stranded on the roads causes them on a daily basis. Some helped to block supply products for fracking, and have been maintaining food supplies.

Last week ended with a strike by the teachers’ union ATEN and the judiciary union SEJUN, which issued a joint statement with various unions at the Universidad del Comahue. It was a strike in solidarity with the health sector. The union leaders, under pressure from their own rank and file and large public support, could no longer stay out of it.

In a recent statement, the workers declared that: ¨(…) In the face of any offer from the government, it will be the assemblies of the hospitals and health centres, including the comrades who are on the different picket lines on the routes, who will decide whether to accept or reject it. If our rebellion was because a group of leaders decided on a miserable increase behind our backs, it will continue to be the rank and file who will decide the next steps. We call on the workers in each hospital and health centre to continue fighting for our decent pay and working conditions to continue in the front line of care for the population in this pandemic and the community to continue to support us.¨

Effects of the uprising so far…

The management tried to get oil workers to denounce health workers. Without success. The contractors complain about losses of millions. But the health workers’ struggle has also revealed that oil companies are raking in millions in profits every day. Another success of the ‘elephants’ (that’s what the health workers call their movement).

“We work in conditions of overwork and overtiredness. We’ve had to maintain daily operations, with a lack of materials and rudimentary equipment.” Since early March 2021, the staff of the Centenario Hospital in the Argentine city of Neuquén has been on strike against planned austerity measures. The women are at the forefront of this. They are fighting against deteriorating working conditions and trying to make up for the loss of childcare in the pandemic. The offer made by Governor Gutiérrez on April 14 to pay a bonus of 30,000 pesos (270 euros) was rejected by the workers and they continue to strike, with energetic support from the public…”

Video of one of the protest marches:

If our rebellion was because a group of leaders decided on a miserable increase behind our backs, it will continue to be the rank and file who will decide the next steps. 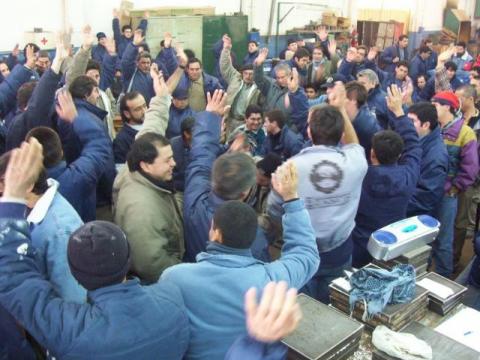 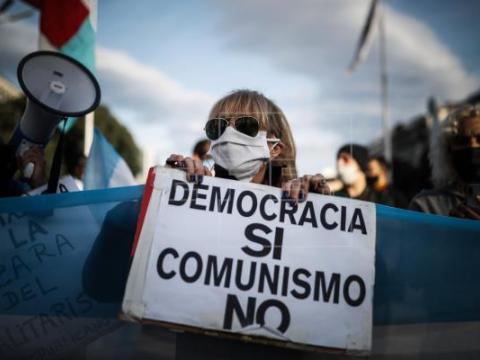 Argentina under Covid - A report from comrades

We asked comrades of Cuadernos de Negación from Argentina some questions about the local conditions during the pandemic.
Image 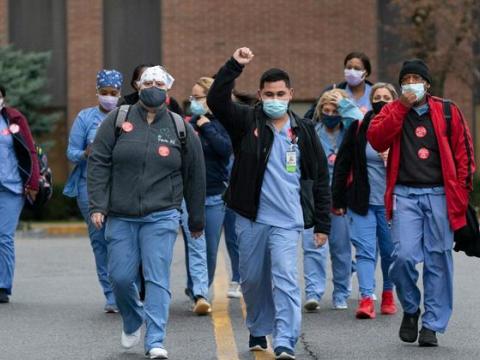 1%? Up yours! We need health workers' and patients' power! 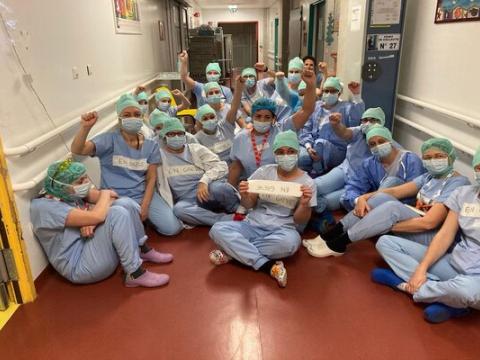 We translated the following two texts from 1988, because we think that there are…