Room maids strike back at a Paris hotel

Nancy Pas Reagan on the struggle of Parisien cleaners who have been on strike since July 2019.

On 17 July 2019, twenty-eight room maids (1) working at the Ibis Clichy-Batignolles hotel (Paris, France) went on an unlimited strike, against the abuses of subcontracting in the industry.  Supported by hospitality workers' union CGT-HPE (2), they denounced the hellish work pace, wage theft, and psychological bullying which they endured. Six months later, amidst a nationwide struggle against Emmanuel Macron’s neoliberal overhaul of the pension system, striking room maids of the Ibis Clichy-Batignolles shared a queen’s cake with their supporters at the picket line  (photos here and here). As they are now in the seventh month of the strike, here is some information on this exemplary mobilization.

The Accor group (Sofitel, Pullman, Novotel, Mercure, Ibis, etc.) subcontracts most cleaning labour to various companies, here STN-TEFID. Subcontracted workers, mostly immigrant women of color, strain their wrists and backs for wages ranging from 700 to 1300 euros a month. Historically, room maids at the Ibis hotel haven’t been paid hourly: STN’s management predetermined that each worker had to clean three and a half rooms per hour and, before the strike, when this work would take longer than contractually agreed upon (as was very frequently the case), STN would not pay for the additional working hours.

In addition to economic exploitation, the room maids are particularly vulnerable to harassment, abuse, and violence from the hotel hierarchy. Strikers reported that the hotel’s head housekeeper, an Accor employee, enforced an oppressive work environment in order to keep them subdued. But the strikers are denied access to any recourse because, as subcontractors, they are technically not employees of Accor. Furthermore, in 2017, a room maid accused the hotel director of raping her while she was cleaning a room. Accor dismissed him but did not run any internal investigation, and the group still refuses to address the structural causes that enabled the assault in the first place: the invisibilization, devaluation, and reification of subcontracted staff.

STN employs several strategies to intimidate workers, sometimes in violation of labor regulations. For example, STN tried to fire Aboubacar Traoré, the hotel CGT-HPE union rep, on three separate occasions. But, in France, union representatives are still “protected workers,” meaning that the Labor Inspection must examine an employer’s motives in case of a dismissal and preemptively rule on the procedure’s validity. The Labor Inspection ruled each of STN’s attempts to lay off Aboubacar Traoré to be unjustified and thus void.

However, the “mobility clause” included in every contract is a legal and powerful tool of subjection that isolates subcontracted workers and further alienates them from their labor. Indeed, STN can impose transfers across the Île-de-France region (4), considered a single employment area, although it spans 12,000 square kilometers (4,600 square miles). In a metropolis where high rents have pushed workers further from their workplaces, and where two, three, four-hour commutes are frequent, this symbolic punishment also has material consequences for these people.

Mama Ndiaye joined the strike because, after ten years at the Ibis Clichy-Batignolles, STN wanted to transfer her to a hotel 30 miles from her current place of work. Her mistake? Having wrist tendonitis, for which the physician asked to reduce her workload. Rachel Keke, who has been working at the hotel for the past 16 years under four different subcontracting companies, called the practice “salaried slavery”.

Accor is generous...with shareholders, not workers

A few weeks after the launch of the strike, STN conceded to installing a punch clock in this hotel and ending its wage theft practices. In November 2019, STN proposed full-time contracts instead of the unrealistic part-time work agreements; end transfer procedures; and give a permanent contract to the strikers still on temporary contracts. Although these propositions did not respond to all of the strikers’ legitimate demands, STN still felt confident to impose a one-year seniority clause, which would have excluded seven striking workers from the agreement. The strikers refused to give up on their comrades and rejected STN’s offer. So far, STN and Accor have failed to come up with a serious and fair response to their demands.

The strikers want Accor’s contractual recognition that they are a part of the hotel workforce, so that collective workers’ protections also apply to them. Yet so far, Accor has refused to hear the strikers, although it can certainly afford it. The world's sixth largest hotel group, owning almost 5,000  hotels, reaped 3.61 billion euros in revenue in 2018, a 16.9% increase from 2017. While the strikers have to count on class solidarity to survive, Accor just announced that it would distribute a billion euros in dividends to its shareholders over the next 2 years. This is an injustice that Rachel Keke has underlined : “It's because we take care of the rooms, that the Accor group has money and that tourists come here. Today, when bosses walk around in suits, it’s because we work well.”

Accor’s strategy is that of stalling—also called the rotting strategy (la stratégie du pourrissement)—which consists in ignoring the workers’ demands and simply wait for the strike to become too expensive to sustain. In response, the strikers occupied the lobby of another Ibis hotel in Paris on January 19 for a few hours, with the Gilets Noirs (Black Vests), who have also mobilized against the abuses of subcontracting. They joined forces to pressure Accor into reentering negotiations about its labor practices. To end the occupation, Elior (5), STN, and Accor promised to resume negotiations. The Ibis strikers and the Black Vests are now waiting for these companies’ executives to honor their word and convene a meeting.

Striking is a collective struggle

The strike at the Ibis Clichy-Batignolles is not the first of its kind in France. In recent years, protest has mounted against the abuses of subcontracting in the cleaning and care industries, which prey upon immigrant women of color to maximize profits for shareholders at the expense of workers’ health and well-being.

Before the Ibis strike, hotel room maids also working in the Batignolles neighborhood had struck, and won. In February 2018, twelve workers of the Holiday Inn Paris - Porte de Clichy (6), resumed work following a 111-day strike against the abuses of a subcontracting company. They won wages paid on an hourly basis rather than per task completed, a daily compensation of seven euros for the lunches they must take at work, and an end to arbitrary and punitive transfers. In December 2018, InterContinental Hotels Group integrated the workers into the hotel staff, as the equality of treatment earned through the strike rendered subcontracting superfluous.

But winning a fight against large corporations through striking is straining, and not always successful. In September 2019, cleaning workers at the NH Collection in Marseille, which subcontracts to Elior, suspended their 167-day strike without obtaining the pay raises they demanded. However, the strikers celebrated the growing revolt of hotel room maids in their union statement. Tiziri Kandi, a CGT-HPE union comrade who has been organizing with subcontracted hotel workers in the Paris area for over three years, stressed the necessity of wide and durable class solidarity in these power struggles.

In the first weeks of the strike, four women resumed work at the Ibis Clichy-Batignolles. But over half of the force remains on strike, in part thanks to the solidarity of people across the country. Low-wage workers take huge risks when they organize, and they need moral and financial support to absorb lost wages and stay motivated. Since the beginning of the strike six months ago, the CGT-HPE has been disbursing between 17,000 to 19,000 euros every month to support the strikers at the hotel Ibis Clichy-Batignolles.

Tiziri Kandi recalled that media attention for their struggle waned in November and, as a result, donations to the strike fund did too, impacting the strikers’ morale — at a moment where the conflict seemed locked because Accor was refusing to negotiate. But since a nationwide strike movement began on 5 December 2019, the struggle of the Ibis Clichy-Batignolles regained visibility, leading to several support initiatives from various collectives. In January, they received a combined check of 15,000 euros from three unions, in telecommunications, postal services, and tire manufacturing.

These hotel room maid strikes remind us that grassroots labour organizing can still earn better working conditions for everyone, while highlighting the importance of solidarity.

Accor has capital; the strikers have us!

Let's spread their story wide and contribute to their online strike fund.

(1) Out of about forty room maids.

(4) Where Paris is located.

“It’s because we take care of the rooms, that the Accor group has money and that tourists come here. Today, when bosses walk around in suits, it’s because we work well.”

Rachel Keke, one of the striking room maids of the Ibis Clichy-Batignolles 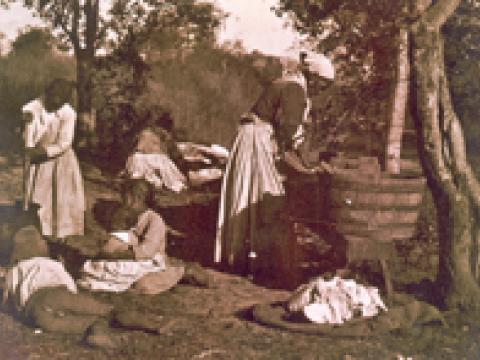 A short history of the strike of overwhelmingly African-American women laundresses in Atlanta Georgia. Coming only shortly after the abolition of…