In the Ruins of the Present

A 2018 pamphlet which gives an overview of the crisis of capitalism, and outlines possibilities for resistance.

Experiences of South Africa’s Abahlali baseMjondolo (AbM or the Shack Dwellers) and Brazil’s Movement dos Trabalhadores See Terra (MST or the Landless Workers Movement) as well as that of the Democratic Youth Federation of India (DYFI) as well as the All-India Democratic Women’s Association (AIDWA) – both mass organisations of the Indian communist movement – show the efficacy of building worker and peasant power in the areas where workers and peasants live.

Experiences from across the Global South show us that the Left will have to prove by its work in the arena of social reproduction that it is indeed a better alternative to religious and charitable organisations as well as the mafia. Left organisations are already working to create platforms to assist the working-class in its fights for water and electricity, housing and street services, schools and healthcare – but at the same time working alongside the working class as it begins to deliver these services in a relatively autonomous fashion. This is dangerous activity. It means undermining the gangs, the religious groups and the NGOs – all of whom have great stakes in this kind of work. 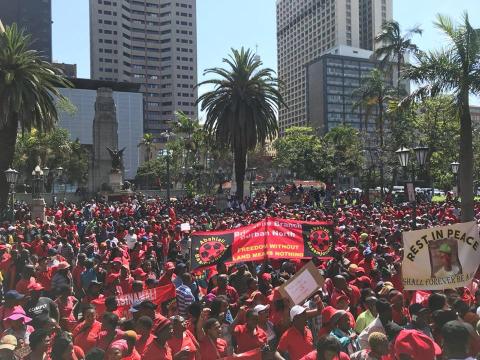