The occupied Sorbonne, May 1968

Leaflet produced by anarchists at the Sorbonne University during the May 68 events.

Join the anarchists in their struggle for the abolition of the system of exploitation and of the apparatus of state coercion!

Don’t put your rights into the hands of the politicians who lead all revolutions into the dead-end of parliamantary democracy! Reject the absurd pretentions of the Marxists who direct the libertarian aspirations of the masses into the concrete structures of the Bolshevik ghettoes!

Don’t obey any more directives from the reformist unions which are trying in vain to exploit for their own profit a great spontaneous liberation movement, at a time when CGT members on the order of the indescribable Séguy turned over to police the student militants who came to talk to them on the nightt of May 24-25!

From: Anarchism in the May Movement in France - Dany and Gabriel Cohn-Bendhit. This version taken from the Kate Sharpley Library

After three days of occupation riot police (CRS) evicted the 400 occupiers of the Sorbonne just before 4am. 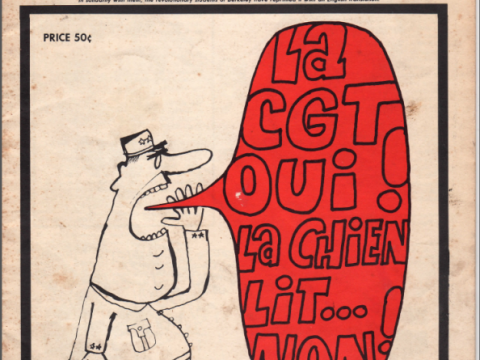 A reprint (in both French and in English translation) of no. 1 of L'Enrage, a satirical journal founded by Jean-Jacques Pauvert and produced in France during the May 68 events. Translated by…