Amidst deteriorating conditions and harsher regulations anger boiled over this week as a prison guard and prisoner were killed in Malandrino prison.

Tensions are running high in the Greek prison system at the moment after the death of a prison guard and the prisoner who killed him.

Earlier this week Llia Kareli, a 42 year-old prisoner of Albanian origin, killed a prison guard, Yiorgos Tsiranis in Malandrino prison. Kareli who was serving a long sentence was denied a furlough to visit his dying mother. Having fashioned a sharp implement he stabbed Tsiranis who died instantly. Kareli was then transferred to Nigrita prison and kept in a cell under observation. In this cell he was found dead. An investigation is under way into the cause of death but a coroner's report shows that Kareli was badly beaten with injuries consistent with torture before his death.

Conditions in Greek prisons have been worsening in recent years. A rising prison population and budget cuts have brought the prison system, like much of the Greek state, close to collapse with security services now on high alert for more incidents following Kareli's death.

The current state of the prisons was demonstrated in February when photos and videos were released to the press showing the appalling conditions in Korydallos prison. The prison in an Athens' suburbs has the only hospital in the system. The patients of this hospital went on hunger strike complaining of massive overcrowding and untreated illnesses. These conditions are replicated throughout Greece as cells are often overcrowded forcing prisoners to sleep on the floor. Such is the overcrowding that reports suggest local police stations are housing detainees for long periods. Greece has one of the highest rates of overcrowding in the EU and has been frequently criticised by human rights groups.

The only change to the prison system that the Greek state is proposing is the creation of a new maximum security facility at Domokos in central Greece. The conversation of the existing prison will create an area for the state to house its most problematic prisoners under high-tech surveillance. This was prompted by the escape of C.Xiros during the new year. Xiros, a member of the armed struggle group November 17th ,escaped after years imprisoned during a furlough. His disappearance and subsequent call to arms has the Greek state worried after a recent increase in attacks by armed groups. Anarchist K.Sakkas also vanished not long after whilst on bail. As well as the creation of a high security facility furloughs would be cancelled under the new proposals. It was the denial of such a furlough that prompted Kareli to attack his guard this week.

With more people being crammed in and conditions deteriorating the situation is dangerous and unpredictable inside the Greek prisons. The state's only response is to make conditions harsher which as was seen this week is likely to produce a backlash. 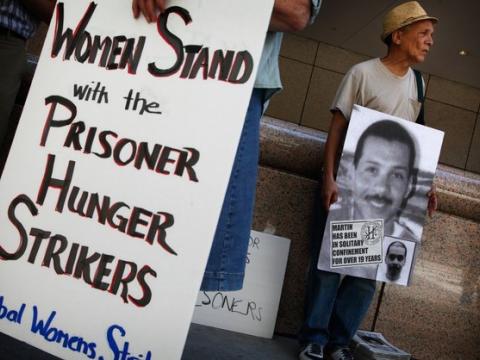 30,000 prisoners in California are refusing food

Over 30,000 inmates across California’s vast prison estate have been refusing meals since yesterday morning. A further 2,300 prisoners have…