Thousands of Coca Cola workers across Germany are staging a series of short term ‘warning’ strikes this week in protest over their wages. Workers at two factories in Bavaria walked out today, with a further 50 plants expected to follow suit later in the week.

The warning strikes generally last several hours, and are a common tactic used by German trade unions. They are the first step up on the pressure on employers in anticipation of the next round of wages negotiations. Workers are demanding a 6% pay-rise for all of Coca Cola’s 10,600 employees across Germany. The bosses are only prepared to offer a 2% rise.

The strikes have been called by the Beverages and Catering Industry Trade Union (NGG). The figure of 6% that the union are calling for is based on Coca Cola’s exceptional (as per usual) financial performance over the last year. Despite that performance, the bosses are demanding more flexible working practices, and are considering making redundancies, on top of the derisory pay increase.

New negotiations are provisionally scheduled for the 30th of this month.

Despite that performance, the bosses are demanding more flexible working practices, and are considering making redundancies, on top of the derisory pay increase. 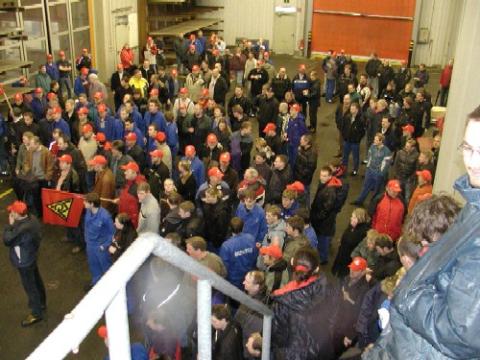