This weeks highlights in political viewing take a creative approach and include a war oratorio and a Russian political allegory.

Other highlights of the weeks viewing are interviews with people caught up in conflicts in Uganda and on the West Bank, a lengthy study of Che Guevara - again! - and a similarly high quality examination of American military policy.

Sun 3 June - 10 - 11pm - BBC3 - Filthy Rich and Homeless - 2/4
A repeat of last Tuesday's episode which I inadvertantly failed to include in last weeks Guide for which I apologise. This week the five wealthy volunteers are required to spend three more days and nights living on the streets this time with the aid of a homeless mentor.

Mon 4 June - 10 - 11.35pm - More4 - War Oratorio
This is a specially commissioned classical work in five movements in which music, recollections and imagery combine in an attempt to provide a critique of the realities of war; the focus is on survivors of conflicts in Afghanistan, Kashmir and Uganda.

Wed 6 June - 12.45 - 2.45am - Indie Movies - Roads to Koktebel
This is a Russian road movie which combines a rite-of-passage tale with an allegorical study of a country in crisis. In Russian with English sub-titles.

Thu 7 June - 7 - 7.30pm - BBC2 - This World: Running from Mugabe
In this documentary, Zimbabweans who were forced to flee their country and illegally enter South Africa at great threat to their safety talk of the terrors inherent in living under Mugabe's despotic regime.

Fri 8 June - 7.35 - 8pm - Channel 4 - Unreported World - 9/10 - The West Bank
This edition looks at the efforts being made by Israeli settlers who are trying to reclaim land they were expelled from just two years ago and expand into new areas; conflicts, tensions and violence are unfortunately increasing on a daily basis.

Pick of the Week :rb:
Fri 8 June - 10 - 11.40pm - BBC4 - Why We Fight
In this Storyville documentary, director Eugene Jarecki examines the development of America's arms infrastructure over the previous 50 years, following Eisenhower's warnings about the country's growing "military industrial complex". This programme is Pick of the Week for its detailed exposition of an important subject. 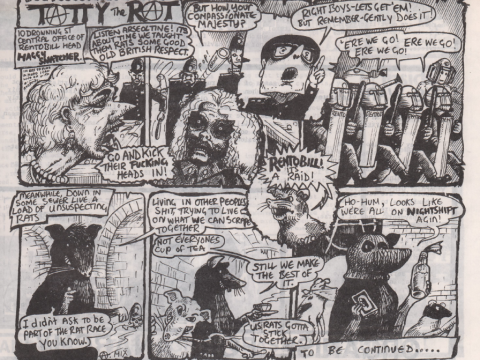 Archive of Tatty the Rat, a short-lived comic strip that ran in the Anarchist Communist Federation's paper Liberation, dealing with issues like the Broadwater Farm riot and 1987 general…

This is the full story of the right wing subversive organisation "The Economic League", which became known for its secret blacklisting activities on behalf of big business, but which has been also involved in anti-democratic conspiracies since the First World War. This book was first made available online by the 1 in 12 Publications library.

Learning to live, teaching to fail

This article first appeared in Direct Action No12, Autumn, 1999, the quarterly magazine of the Solidarity Federation analysing the formation of the modern school and arguing for a libertarian alternative.