Stories about the government threatening a “crack down” on trade union power emerge almost on a loop. Particularly in times of heightened class antagonism. But far from showing the unions as threats to society, such threats are a demand that the unions tighten up their role in policing class conflict.

The latest such story comes from the Independent, the main headline of which is a policy to “make strikes illegal unless at least 50 per cent of union members voted in a ballot.” This ties in with government rhetoric about ballot turnout whenever they attempt to discredit industrial action by a major union.

There are a number of reasons for low turnout. The main one is that the law insists upon postal ballots sent to members' homes as the way to gain a strike mandate. Postal ballots necessarily have a lower turnout than workplace ballots, and other restrictions on promoting industrial action in many workplaces exacerbate this. As do the fact that, in large unions spread across many workplaces, high turnouts from the best organised branches will be offset by low turnouts in less well organised workplaces, or even those which have no reps in them.

However, although this is the measure which always gains headlines, the 50% ballot threshold isn't the most important. The Indy reports that Whitehall opinion is divided on this measure, with Francis Maude and Vince Cable amongst those who oppose it. They must know as well as the TUC that this type of restriction risks increasing the amount of wildcat action workers take, the opposite effect to that intended by these threats.

Restricting further the ability of the unions to take action will only lead to a rise in rank-and-file movements willing to act independently. Both the unions and the government have a shared interest in avoiding this. Instead, the aim of the periodic threats of union busting is to get the trade unions to tighten up their role as keepers of industrial peace.

Tellingly, the Indy article says that the government “have established a constructive relationship with the TUC and, despite ideological differences, with Britain’s largest union, Unite.” Not a surprise to most militants, but certainly a frank admission of their role in the class collaboration that defines the representative function of trade unions. On the other hand, “ministers are also examining new steps to crack down on the Public and Commercial Services union, representing civil servants and local government staff, which is regarded as the most militant in Britain.”

As a member of PCS, I'll be the first to argue that it is far from a militant union. I've detailed before its role in selling out disputes, as well as how reductive it has been in “leading from the front” as far as the coordinated action over pensions was concerned.

Despite this, it finds itself in the firing line because of the Cabinet Office's determination to attack the jobs, pay and working conditions of civil servants. Being to the left (for what little that's worth) of the mainstream trade union spectrum it will not be as quick as, say, Unison to stitch up its membership on these issues. Moreover, trading as it does on its role as the “fighting left leadership” of the union movement, it is far more sensitive than many other unions to rank-and-file pressures – as I've detailed before. All of which, despite it not being very militant at all, makes PCS far too militant for the government's liking.

That is why, whilst the 50% ballot threshold is unlikely to be implemented, other measures here should be taken seriously. The Cabinet Office is already imposing serious restrictions on trade union facility time within the civil service, removing it for attending union conferences or meetings concerned with “internal union business,” but also – more worryingly – even for reps consulting each other on how best to deal with personal cases. Now, it is further talking about “scrapping the arrangement where membership subs are paid direct through the Whitehall payroll.”

The recent history of the trade union movement in response to such attacks – going back to the TUC's collaboration with Thatcher's anti-strike laws – suggests that they will take such attacks lying down. And for good reason, as a May 2012 article for Black Flag details:

Unions officials are expected to be 'responsible leaders'. This includes ensuring workers ‘stick to their half of the bargain’, follow the union-negotiated collective agreement, and stay within the bounds of labour legislation. If they fail do these things, the leaders’ privileged role (which, on the national level, includes six-figure salaries) as ‘representatives of organized labour’ is compromised. Union assets will be frozen, leaders could be jailed, and the bosses—with whom the ‘social partnership’ has been struck—will have no incentive to continue to recognize or negotiate with the union.

When workers ask, “why don't the unions fight this?” The answer is that it isn't worth their jobs and their positions. The government knows that - “capital and government are very aware the division between the union officialdom and the rank-and-file.” Thus, all the union tops can do is meekly protest the attacks, hoping that things don't get worse again.

For PCS in particular, the threat to remove payroll subs collection is a very serious one. The union is losing members thanks to the contraction of the civil service, and it has already started to impose its own austerity measures internally – cutting the length of annual conference, scrapping certain equality events and even shedding jobs – to save money. Several years of heavy campaigning have also left it heavily in the red, making this situation more dire.

From this point then, there are two options: do as the government asks and police class conflict more tightly, or go on the offensive. The latter is suicide for PCS as a representative structure, so it really only becomes one option.

For the rank-and-file of the union, our choice is slightly different: accept this reigning in with a grumble, or launch the offensive that the union refuses to, against the union itself where necessary. This is already happening to some extent with the Civil Service Rank & File Network. Numbering in the tens, we have forced a substantial movement from the union bureaucracy. Numbering in the hundreds or thousands, we could not only continue to do that but raise the question of how we ultimately go beyond PCS and render the representative structure completely irrelevant in favour of direct action.

But this issue is not confined to PCS and the civil service. Already, the Tax Payers Alliance is demanding that similar measures are implemented in the rest of the public sector. No doubt taking on the heart of trade union strength in the public sector will also embolden other employers with recognition agreements to impose similar restrictions and employers whose staff are making their first organising efforts to be even more ruthless in cracking down.

The so-called war on the unions then poses an ultimatum all of us. If the government smashes the unions entirely, or if they are able to preserve themselves, in both cases it will be at our expense. Instead, we need to organise on the ground, win the arguments for acting independently and seize direct control of our own struggles.

Take a look at Sweden. Here we have a working union. I don't understand why all workers in USA can come together and demand better hours and pay? Are you to scarred? Or do you not care? You have to learn to take the power from the industry..

Take a look at Sweden. Here we have a working union. I don't understand why all workers in USA can come together and demand better hours and pay? Are you to scarred? Or do you not care? You have to learn to take the power from the industry..

This blog was written by a UK poster. Also, there are unions in the US, theyve got a membership of about 16 million people.

Yeah, I not sure Ola totally got the point of the blog: we're all totally in favour of workers being organised, coming together, and making demands. However, we feel the trade unions are often an impediment to the sort of independent and militant working class activity that will allow us to win better hours and pay.

When it comes to the idea of what a union is, I've found this distinction helpful: 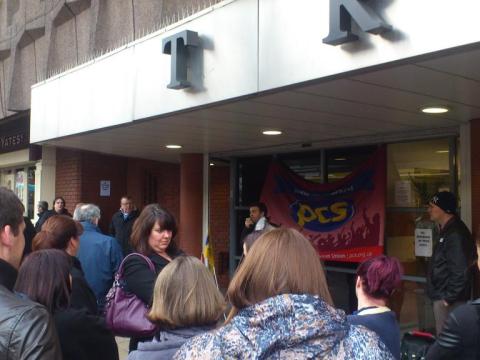 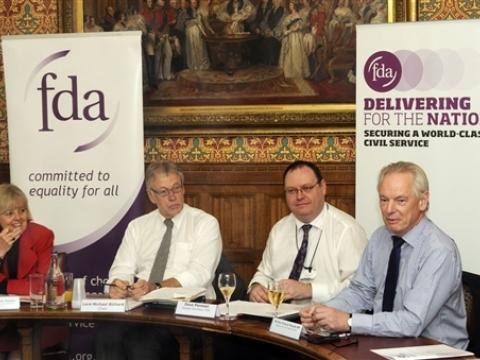