Woman of the Revolution - Mexican soldadera

Revolution approaches! With angered eyes, and flaming hair, her trembling hands knock anxiously on the doors of our nation. Let us welcome her with serenity, for although she carries death in her breast, she is the announcement of life, the herald of hope. She will destroy and create at the same time; she will raze and build. Her fists are the invincible fists of a people in rebellion. She does not offer roses or caresses; she offers an axe and a torch.

Interrupting the millennial feast of the content, sedition raises her head, and the prophecy of Balthasar has with time become a clenched fist hanging over the heads of the so-called ruling class. Revolution approaches! Her mission will ignite the flames in which privilege and injustice will burn. Compa?eras, do not fear the revolution. You constitute one-half of the human species and what affects humanity affects you as an integral part of it. If men are slaves, you are too. Bondage does not recognize sex; the infamy that degrades men equally degrades you. You cannot escape the shame of oppression. The same forces which conquer men strangle you.

We must stand in solidarity in the grand conquest for freedom and happiness. Are you mothers? Are you wives? Are you sisters? Are you daughters? Your duty is to help man; to be there to encourage him when he vacillates; stand by his side when he suffers; to lighten his sorrow; to laugh and to sing with him when victory smiles. You don't understand politics? This is not a question of politics; this is a matter of life or death. Man's bondage is yours and perhaps yours is more sorrowful, more sinister, and more infamous.

Are you a worker? Because you are a woman you are paid less than men, and made to work harder. You must suffer the impertinence of the foreman or proprietor; and if you are attractive, the bosses will make advances. Should you weaken, they would rob you of your virtue in the same cowardly manner as you are robbed of the product of your labor.

Under this regime of social injustice which corrupts humanity, the existence of women wavers in the wretchedness of a destiny which fades away either in the blackness of fatigue and hunger or in the obscurity of marriage and prostitution.

In order to fully appreciate women's part in universal suffering, it is necessary to study page by page this somber book called Life, which like so many thorns strips away the flesh of humanity.

So ancient is women's misfortune that its origins are lost in the obscurity of legend. In the infancy of mankind, the birth of a female child was considered a disgrace to the tribe. Women toiled the land, carried firewood from the forest and water from the stream, tended the livestock, constructed shelters, wove cloth, cooked food, and cared for the sick and the young. The filthiest work was done by women. Should an ox die of fatigue, the women took its place pulling the plow, and when war broke out between rivaling tribes, the women merely changed masters, and continued under the lash of the new owners, carrying out their tasks as beasts of burden.

Later, under the influence of Greek civilization, women were elevated one step in the esteem of men. No longer were they beasts of burden as in the primitive clan, nor did they lead secluded lives as in oriental societies. If they belonged to a free class, their role was one of procreators of citizens for the state; if they were slaves, they provided workers for the fields.

Christianity aggravated the situation of women with its contempt for the flesh. The founding fathers of the Church vented their outbursts of rage against feminine qualities. St. Augustine, St. Thomas, and other saints, before whose statues women now kneel, referred to women as daughters of the devil, vessels of impurity, and condemned them to the tortures of hell.

Women's position in this century varies according to their social stature; but in spite of the refinements of customs and the progress of philosophy, women continue subordinated to men by tradition and laws. Women are perpetually treated as minors when the law places the wife under the custody of the husband. She cannot vote or be elected, and to enter into civil contracts she must own a sizeable fortune.

Throughout history women have been considered inferior to men, not only by law but also by custom. From this erroneous and unjust concept derives the misfortune which she has suffered since humanity differentiated itself from lower animal forms by the use of fire and tools.

Humiliated, degraded, bound by chains of tradition to an irrational inferiority, indoctrinated in the affairs of heaven by clerics, but totally ignorant of world problems, she is suddenly caught in the whirlwind of industrial production which above all requires cheap labor to sustain the competition created by the voracious "princes of capital" who exploit her circumstances. She is not as prepared as men for the industrial struggle, nor is she organized with the women of her class to fight alongside her brother workers against the rapacity of capitalism.

For this reason, though women work more than men, they are paid less, and misery, mistreatment, and insult are today as yesterday the bitter harvest for a whole existence of sacrifice. So meager are women's salaries that frequently they must prostitute themselves to meet their families' basic needs, especially when in the marketplace of marriage they do not find a husband. When it is motivated by economic security instead of love, marriage is but another form of prostitution, sanctioned by the law and authorized by public officials. That is, a wife sells her body for food exactly as does a prostitute; this occurs in the majority of marriages. And what could be said of the vast army of women who do not succeed in finding a husband? The increasing cost of life's basic necessities; the displacement of human labor by the perfection of machinery; the ever-decreasing price of human laborÃ³all contribute to the burden of supporting a family. The compulsory draft tears strong and healthy young men from the bosom of a society and lessens the number eligible for marriage. Migration of workers, caused by economic and political phenomena, also reduces the number of men capable of marriage. Alcoholism, gambling and other ills of society further reduce the number of available men. Consequently, the number of single women grows alarmingly. Since their situation is so precarious, they swell the ranks of prostitution, accelerating the degeneration of the human race by this debasement of body and spirit.

Companeras: This is the frightful picture offered by modern society. In it you see men and women alike suffering the tyranny of a political and social environment in complete discord with the progress of civilization and the advances of philosophy. In times of anguish, however, do not look up to the heavens for solutions and explanations because in that lies the greatest contribution to your eternal bondage. The solution is here on earth! That solution is rebellion.

Demand that your husbands, brothers, fathers, sons and friends pick up the gun. Spit in the face of those who refuse to pick up a weapon against oppression.

Revolution approaches! Jimenez and Acayucan, Palomas, Viesca, Las Vacuous and Valladolid are the first gust of the inevitable wind. A tragic paradox: freedom, which is life, is gained by imparting death! 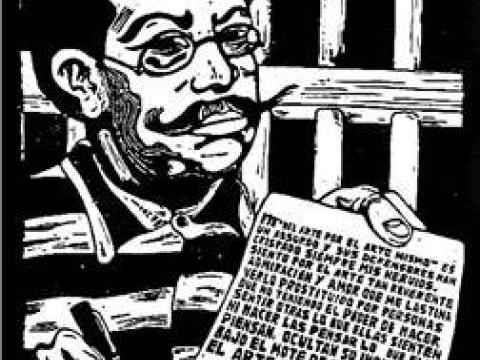 In this letter to a friend, Ricardo Flores Magon expresses his feelings on being locked up for being an anarchist...