Libcom.org's reading guide on the German Revolution of 1918, which ended the First World War and saw soldiers' and workers' councils spread throughout the country before being crushed by an alliance of the Social Democratic Party and the right-wing Freikorps.

I would suggest adding:

Just added the Wild Socialism book. For those who don't know, Amazon lets you return ebooks, making it easy to download an ebook, copy it, and then immediately return it for a full refund.

On copying legit ebooks, pretty sure ones bought from amazon et al contain metadata identifying the amazon user who purchased them. Anyone know of software to scrape off said metadata?

How about these too?

The German Revolution 1918-1919 by Ralph Haswell Lutz (1922). A first-hand account by an America academic. Lots of excellent details, but rather dry and dispassionate.

The German Revolution of 1918: A Study of German Socialism in War and Revolt by A. J. Ryder (1967). This is a very thorough account.

unfortunately, many good books on the topic like the classical accounts and studies of Richard Mueller, Paul Froelich, Karl Retzlaw, Peter von Oertzen or Erhard Lucas are only available in German

- Werner T. Angress: Stillborn revolution: the Communist bid for power in Germany, 1921-1923 (1972). not from a particularly radical viewpoint but a solidly written scholarly study about the KPD and its internal structure

- Ernst Toller: A Youth in Germany/I was a German (1933/34) autobiography of the writer Ernst Toller who was with 26 years head of state of the Bavarian Soviet republic, he was in that period a member of the USPD and can generally described as an anti-authoritarian and humanistic socialist, the autobiography deals with the time from his childhood to his release from prison in 1924 and deals (sometimes sarcastically) extensively with the period 1918/19 in Munich

- Ernst Toller Masses Man/Masses of Man (1919), play, written by Toller in prison in a few days about the dangers of the revolution and the relationship between means and ends, the model for the main protagonist was Sarah Sonja Rabinowitz, a schoolteacher and USPD and Bund member who was one of the leaders of the January 1918 strikes in Munich, she committed suicide in prison in March 1918 after her husband, the famous linguist Eugen Lerch had announced in a newspaper article to divorce her for "patriotic reasons"

- Rosa Meyer-Leviné: Levine: the life of a revolutionary and Inside German Communism, Memoirs of Party Life in the Weimar Republic, two inside accounts by Rosa Meyer-Leviné who was first married to Eugen Leviné, the assassinated leader of the KPD during the Munich Soviet Republic and than from 1922 on to Ernst Meyer who lead the KPD 1921/22 and was one of the leading figures of the "conciliator" current up to his early death in 1930

haven't read the two novels by Theodor Plivier which deal with this period: The Kaiser Goes: The Generals Remain and The Kaiser’s Coolies, both written in the early 1930ies

available in Italian and French but the German original wasn't reprinted since 1929: http://collectif-smolny.org/article.php3?id_article=1858 ... most of the authors were "Brandlerites" 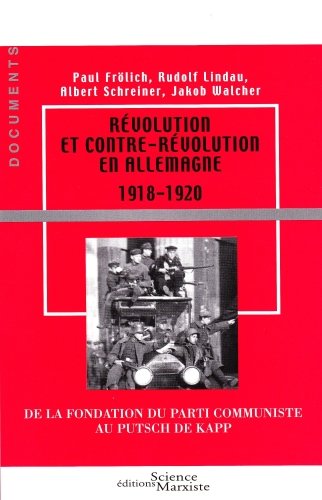 Any chance you could remind us what a "Brandlerite" is, in your view (rather than Wikipedia's for e.g.)?.

Any chance you could remind us what a "Brandlerite" is, in your view (rather than Wikipedia's for e.g.)?.

a pejorative term for those who were expelled from the Communist International 1928/29 and formed the International Association of the Communist Opposition, mainly groups in Germany (KPD-O around Brandler, Thalheimer, Froelich and Walcher), Sweden (around Kilbom), USA (the "Lovestonites") and Switzerland (Bringolf) plus smaller groups in a dozen other countries also labelled "Right Opposition", mostly skilled union activists, experienced local councillors and intellectuals who were opposed to some features which they perceived as ultra-leftist: splitting unions and setting up red unions, rejection of united fronts with other leftist parties, anti-Luxemburgism, lack of democracy and over-centralization of the Communist International, they regarded themselves as a kind of external faction up to 1936/37, most of them (re-)turned to social democratic parties during the 1930ies, a few succumbed to the official CPs after 1935 (while most were opposed to the concept of people's fronts), ... from my own experience with members of one of the still existing "Brandlerite" groups in Germany: hard-working and no-nonsense grass roots and union activists, generally trustworthy and friendly people who rarely talking initiatives on their own ("following the lead of the mass of workers"), more a rearguard than a vanguard org (despite their positive views about Lenin)

Just added Victor Serge's writings from his time in Germany in the aftermath of the revolution.

Just added to the library The German Revolution by French Trot Pierre Broue.

EDIT: I decided to add this to the key texts section. A fair amount of the book is taken up by descriptions of KPD internal wrangling, but it's the most extensive book on the revolution that I've been able to find in English.

Well the West German film about Rosa Luxemburg covers the early days of the revolt at the end.

Also the last episodes of the BBC drama Fall of Eagles is set during the events.

Ute Daniel, The War from Within: German Women in the First World War.

Claudie Weill, ‘Women in the German Revolution: Rosa Luxemburg and the Workers' Councils', in Christine Fauré (ed.), Political and Historical Encyclopaedia of Women.

Sean Dobson, Authority and Upheaval in Leipzig, 1910-1920: The Story of a Relationship .

A People's History of the German Revolution: 1918-19
by William Pelz

'The German revolution defeated and fascism deferred: the servicemen's revolt and social democracy at the end of the First World War'
by Nick Howard.