Sorry to be a bearer of bad news, but thought people would want to know that Ken Weller, former member of Solidarity, died yesterday.
Ken donated large amounts of Solidarity materials for digitisation by libcom.org, including large numbers of Solidarity pamphlets as well as copies of Solidarity for Workers Power.
He also wrote a great book about opposition to World War I in London, and loads of great articles/pamphlets about struggles in British industry in the 1960s and 70s.
He also had a huge amount of knowledge about struggles and battles over workers' control in the UK in his head, which he would go into sometimes giving fleeting glimpses of a bygone era as part of a seemingly unrelated discussion. We had wanted to try to record some of his memories of this for a podcast episode, but unfortunately he didn't like the idea of being recorded. So it seems likely that some of this knowledge has now been lost.
I last spoke with him just a few weeks ago. Clearly his health had deteriorated significantly by this point.
Huge condolences to everyone who knew him, especially his son, who has done so much to look after him recently.
For anyone who's interested, there is a decent archive of his writings here: https://libcom.org/tags/ken-weller
And PM Press is planning on publishing a compilation of his work as well, which is extremely welcome.

Year ago, when they were clearing out their archives, the Black & Red comrades in Detroit gave my Bay Area comrades a near-complete collection of Solidarity pamphlets. I was always most impressed by ones authored by Ken. My all time favorite is “The Lordstown Struggle And the Real Crisis in Production,” which had such an amazing grasp of the dynamics of class struggle on the other side of the world. So sad that he’s passed.

Ken used to phone me regularly for chats about working class history and provided me with much information that helped me write some of my biographies of revolutionaries active in Britain, as, for example, Leonard Motler, ,Gertrud Guillaume-Schack, Johanna Lahr etc. Sometimes I visited him in Lathom Road, where he drank large mugs of tea whilst talking about history and about the iniquities of Gerry Healy and the Socialist Labour League. I even persuaded him to come out , reluctantly, to give a talk on his book about resistance in WW! in North London. I will miss him a lot.

Saw him give an interesting talk in the 80s about the effect of the Hungary 56 workers uprising on the CP membership, how it broke the Party's domination of the left; as outlined here - https://libcom.org/history/looking-back-1956-30-years-after-ken-weller

Sad news - this 1972 tabloid article exposing him made me smile: 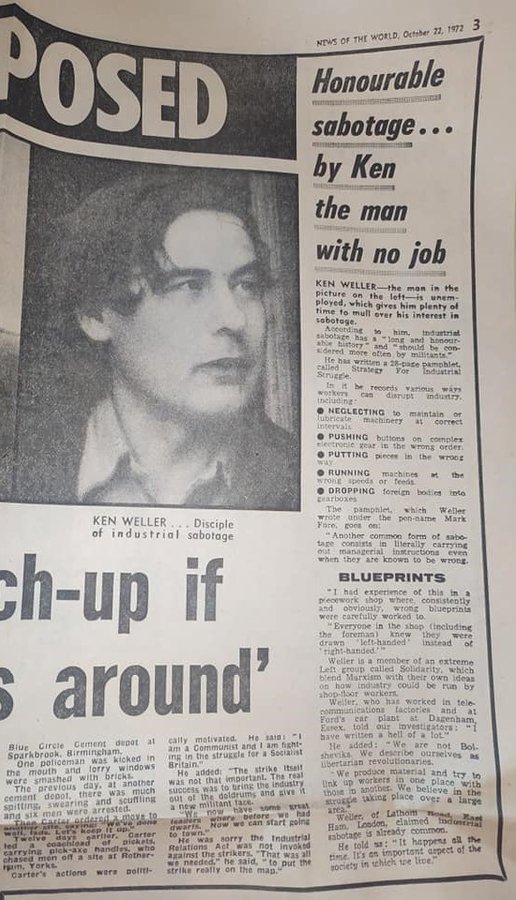 He taught me how to use a Gestetner duplicator (in 1971) and I spent many an hour at Lathom Road duplicating, collating and stapling Solidarity pamphlets - all came in useful later when we started the CWO (but now all redundant skills in these digital days).. He had a great collection of documents which showed CIA interference in UK union leaderships (particularly GMB and the white collar union whose name I have now forgotten - APEX?). He must have been nearly 90.

Ken was a mainstay of the old London Solidarity group at it's best and a fine working class militant and historian who contributed much of value to the rest of us over many years.

Sorry to learn of the death of Ken Waller.

Although I have always considered myself an anarcho-syndicalist, the many pamphlets and publications by Solidarity have had a long and lasting influence on my thinking.

Rest in power, Ken. Your words and actions crossed so many paths.

Fozzie, that tabloid article is amazing! Would be great if someone had the time to type it up/OCR it for the library.
Battlescarred

Ken used to phone me regularly for chats about working class history and provided me with much information that helped me write some of my biographies of revolutionaries active in Britain, as, for example, Leonard Motler, ,Gertrud Guillaume-Schack, Johanna Lahr etc. Sometimes I visited him in Lathom Road, where he drank large mugs of tea whilst talking about history and about the iniquities of Gerry Healy and the Socialist Labour League.

This brought back fond memories for me as well. I once made the mistake of requesting a coffee at his house, which came back tasting very bizarre. After that I just stuck with tea.
Another subject he would touch upon regularly with me was the hold of the Communist Party on the British left for a time. In particular he spoke about an investigation undertaken by him and others I believe, looking at the sheer number of people whose paid employment was related to the Party which he said came up to over a thousand, thus giving those people very strong vested interest in agreeing with the Party line.

I even persuaded him to come out , reluctantly, to give a talk on his book about resistance in WW! in North London.

I don't suppose this was recorded anywhere was it?
I'm not exactly sure what his health problems were, but from what he told me it seems like they started after he was severely injured on a motorbike when he was hit by a van full of police officers (not sure if it was a police van or a van which just happened to have off duty officers in it). So my understanding was that these health problems were why he stopped working in industry, and it seemed that those problems had lasted until now in some form. This may be a misinterpretation on my part. But anyway, very sad.

Yes, Ken was always anxious when he left the sanctuary of his home, breaking into a sweat, and shaking. He had definitely had an accident which had traumatised him, but I heard a much sadder story about the accident, and I didn't want to ask him if this was true, because I didn't want to upset him.
The talk was at Middlesex Polytechnic, that I arranged when I was a mature student there in 1986. One of those who attended was Ian Birchall, then in the SWP and now in rs21. Not recorded, I'm afraid.

No problem, I thought it couldn't hurt to ask.
One positive thing was that Ken was clearly excited and happy about the resurgence in interest in the ideas of Solidarity in recent years.
When we spoke he would normally ask me questions about how Solidarity materials were being perceived, and what people now were getting from them, and he definitely enjoyed hearing positive stuff about that. So much of it was so ahead of its time, that it's great it has had a wider audience again more recently.

Came across the Guardian obituary by chance today. Really sad news. I remember visiting Ken a number of times in 1980s at Lathom Road and sitting in his back room mostly listening. The interview he kindly did with me 'What is Libertarian Socialism?' - available on this website - presents a campelling case for the politics Solidarity represented. His political intelligence and capacity to link stories and annecdotes to political principles and theory was hugely impressive, and I can still recall the tones of outrage and exasperation at the faillings of the traditional left, his dog (Badger?) and the large mugs of black coffee (though he may have been drinking tea!). As I'm sure was the case for numerous people, he had a big impact on me.