Leaflet produced to encourage non-payment, as part of the movement against the Poll Tax.

Another aspect of the proposed legislation is that industry, especially large industry, will pay much less towards local government than at present. So a boss will gain twice from the new system, once because his or her personal contribution will plummet, and again because business costs will fall due to the drop in rates for business premises. This handout for the rich will be paid for out of our pockets.

Why the change?
Over the last 15 years or so, the world economy has been in crisis. Although this crisis has been deeper at some times than at others, and although it manifests itself in different ways (e.g. unemployment, inflation, stock market crash) it has been with us constantly since the early seventies. Rulers the world over have been forced to attempt to fend off the ‘recession’ by the same means; attacking the working-class. In many countries first inflation and then unemployment have been manipulated in order to make us work harder for worse rewards. The last Labour government in this country used a wages policy to attack workers. In the Soviet Union "perestroika" will mean wage cuts and price rises. The present Tory government plans to replace ‘the rates system with the "poll tax".

This "poll tax" is a particularly blatant attack on the working class. It will mean a massive drop in living standards for many, including many already at the bottom of the social ladder. Under these conditions many people will attempt to avoid paying the tax. Some people will have little choice but to avoid paying.

It has already been recognised by some sections of the ruling class that resistance to the community charge may well be widespread enough to make the tax inoperable. Some of these people (Tory as well as Labour M.P.s) are already advocating different systems which will not be as harmful to the working class. The more resistance we offer to the implementation of the community charge, the more likely it is that the government will be forced to climb down and keep the old rates system or introduce another, less vicious, system.

We have stated how the community charge will result in a drop in standards for many people. We do not however see ourselves as being in the business of forming better policy for the present government. We are against the poll tax not because its unfair and will be resisted, but because it represents an attack on our class. Because we take this view we are in favour of all working class people avoiding the tax whether they themselves are much worse off or not. Refusing to pay the tax means refusing to allow the ruling class to rob us in yet another way. We need no excuses to defend ourselves from our class enemies.

Resistance to the new system
The most effective way of combatting the community charge is obviously to just not pay. There will be many people who will be doing this out of necessity anyway. The more people who refuse to pay, the more others will be encouraged to do likewise. In fact the main purpose of this leaflet is to help get this snowball moving as rapidly as possible. The most important thing to do now is to ensure that your name and address are not added to any local or national government lists, e.g. the electoral register. In the event of a census being carried out, refuse to give any information. If possible, remove snoopers from your area by force. Sabotage, industrial action and refusal by those asked to administer the system are also important possible forms of resistance.

If you agree with all or most of what we have written then we would be interested to hear from you. However we are not some leftist organisation looking for recruits. Neither are we a campaigning group seeking to represent those who oppose the community charge. We are a small group of people who will refuse to pay the community charge if it is introduced and who would like to see as many other people avoiding payment as possible. Discuss this with friends. If enough people refuse to pay then a less punishing system may be retained or introduced. In any case, we should be able to keep what we save by non-payment.

Refuse to register, refuse to pay!
We intend to produce more anti-poll tax material in the future, including information on the resistance to community charge in Scotland, and a pamphlet dealing with the issues raised by the poll tax and resistance to it. Write to us if you want to receive copies, or if you want to discuss this leaflet, or if you would like multiple copies of it. 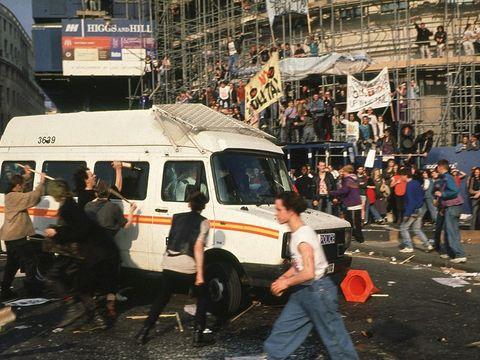 Our activity in the late 1980s and 1990s: activity and balance sheet - Antagonism

The Antagonism group reflect on their activities and theoretical development, through involvement in various groups and struggles from the mid-1980s to the end of the 1990s.

The aim of the Anti-Poll Tax campaign was to make the tax unworkable. If enough people refused to pay, then the Poll Tax couldn't be enforced. The courts would be blocked; the bailiffs would be turned away; wage arrestment would prove too complicated; and the final solution — prison — would prove politically disastrous for any Labour council (and in any case was unenforceable because there was no room for large…