Do the classes of which we are speaking really exist? Is it all only based on illusion? Have the mass media finally persuaded us that it is all "Marxist jargon" and that we are all workers now, because Lady Mary spends her days in a boutique and the Earl himself has to show visitors around his stately mansion?

There is so much confusion that we have not only to spell out what is meant by "classes", but to explain it by diagrams. 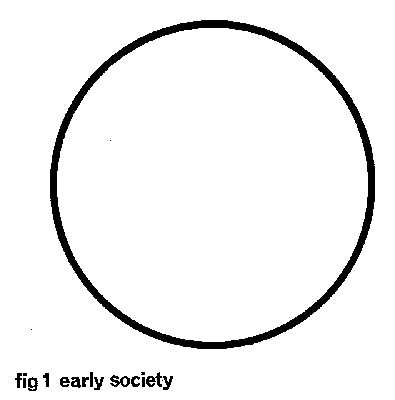 Society is represented by a circle, and the primitive society (fig 1) is an empty circle. There are neither State organs nor classes. It might have a titular chief, but if we represent him by a point on the circumference, it means nothing whatsoever until (fig 2) he has created some form of repressive machinery. When the slave-driver has cracked his whip, the first dominant class appears; the free men of the tribe as against the slaves. Together with the warriors they are the first force that can be used for internal oppression as well as external aggression ordefence. 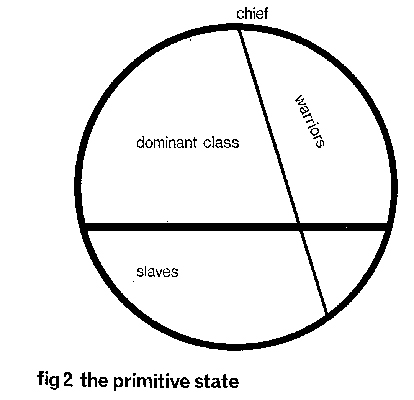 In the medieval society (fig 3) we can see that the ruling class has begun to emerge. 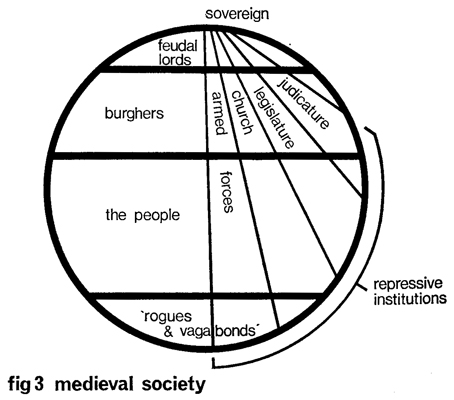 It forms the upper strata, with the Church as a cross-segment. In some societies the "armed forces" segment can be extended to include the rest of the circle (for all men are warriors). In some, the Church has to be extended, for all are "believers". But even so, there emerges the division of rule in the form of judicature and legislature, and the enforcement of decisions made by the upper strata separates off the lower horizontal strata, until modem capitalistic society emerges (fig 4). 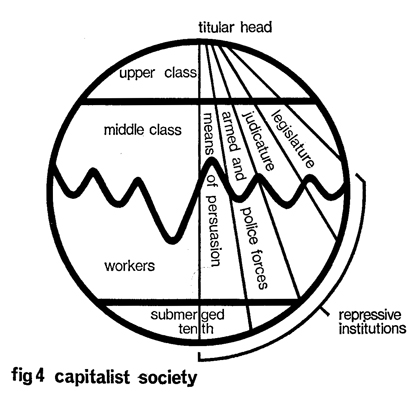 In the top segment of capitalistic society is the "gilded amalgam" of landowners, industrialists, financiers, bankers. The top section cuts across the vertical divisions, and marks out the generals, leading industrialists, top civil servants, judges and so on. But it is firmly divided horizontally from the rest of society.

It is not all but impossible to pass over that firm line as it was in feudal society when only the Church provided a bridge. Victorian and Edwardian novels are full of the dilemmas of those who do pass over the line. There have been self-made millionaires and ambitious politicians. But all the same, there is at all times -- so far as this firm line is concerned -- a clear distinction as to who is "above" and who is "below", even under a democratic process of election to some of the right-hand sections.

The middle class is divided in our diagram from the working class by a wavy line. Not firm, it goes up and down like a geiger counter (fig 5). 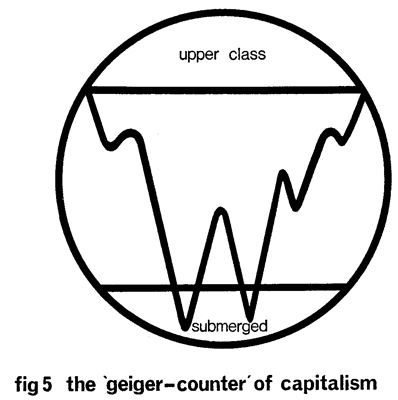 The so called "lower middle class" can be down on "working-class" levels, such as those for instance in clerical occupations who, as a result of snobbery or establishment propaganda, imagine themselves to be bourgeois, or are treated as such socially, without being so economically. There may be shopkeepers, after bankruptcy say, or market stallholders, who, according to economists, would be "middle-class", but might reach down into the submerged level.

The existence of this submerged level is a repressive force just as much as are the armed or police forces. The fear of falling into the pit may be greater than the threat of imprisonment. Criminals certainly have found this to be the case. The submerged level may rise in times of depression. It may even take in what we might call the bottom of the civil service, people employed by the State on road duties, public works and even conscript soldiers at the old penny a day level.

In the middle-class horizontal level, on the right-hand side, we find chief constables, bank managers, trade union leaders. On the same side of the working-class stratum, we find policemen. A hoary question asked of the libertarian revolutionary is whether he considers policemen workers? Clearly yes; but in the right-hand segment. Their economic interests are the same, but they are still divided by the governmental system (vertical line) though not by the horizontal (class) one. In this case, ideas of duty make the line impassable. The soldier, especially if a conscript, may ignore the line when the sequence of command-and-obey is broken. Even the police have done so (the police strike) but normally when they do so they are dismissed and cease to be policemen.

The strengthening of the police role, because of the difficulties in the enforcement of government, may lead to a police state. But this does not have any effect upon the social economic structure of society under the State other than one of maintaining domination. It is not in their reliance upon the police that state communism and fascism differ from democracies, which may also move to a police state (the USA has done so more than once). In the totalitarian system (fig 6) the civil service includes the whole circle; sooner or later everyone becomes a servant of the State. 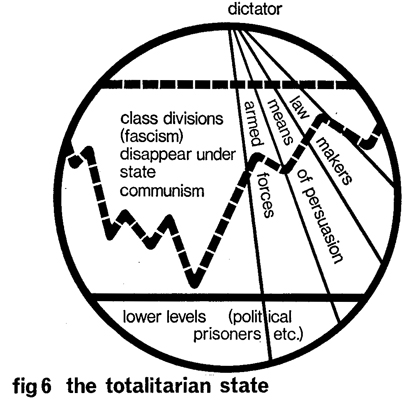 Under state socialism or communism the class divisions (straight and wavy lines) become obliterated and may even ultimately disappear. Not so in fascism. But in both, the ruling class tends to become identified with that part of the vertical segments labelled "the bureaucracy", which has taken the older role of the Church. The horizontal layer at the bottom does not disappear. Even if it should come to be no longer required by economic necessity, because artificial "depressions" are cured, it is essential to have a limbo to which prisoners-of-war, political prisoners, forced labour, penal battalions and the like, can be consigned.

The tendency of the party, if the totalitarian regime moves on and is not cut short in its prime, is to stabilise the circle with an inner segment (fig 7). 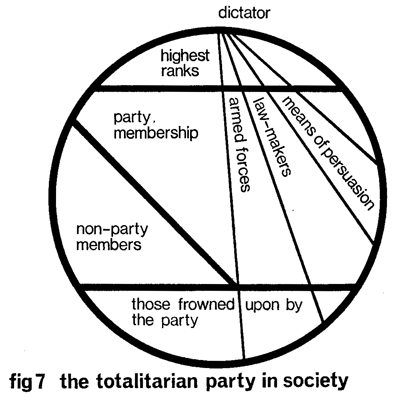 The head of state is supreme. If classes still exist, it includes a mixture of them. The bureaucracy, though nominally party members, are outside any control by it. The submerged level includes those who have lost their party cards and may even rise to include the lower ranks of the party (the deviationists).

It is true that the divisions are not so clear in reality as they are in our diagrams. The art of establishment and party propaganda alike is to blur the fact that there are such divisions. Because it is on occasion possible to ignore them, and sometimes to be genuinely unaware of their existence, it is assumed that they do not exist. A self-employed newspaper seller may harbour the illusion that he has more in common with the directors of W.H. Smith & Sons than he has with the working class.

Laissez-faire capitalism would blur the segmentary lines. Social-democracy would revise them. In a welfare state, the geiger line would vary and might even be regulated. Toryism would maintain the straight line. Kings and presidents are imaginary dots on the circle. Dictators maintain their power only when they can maintain their place on the circumference where lines of division meet. For power exists when the will of the people and the wishes of the rulers coincide. Fashioning the will of the people is the first essential of government.

The segments in these diagrams are not, of course, drawn proportionately. What the correct proportions should be is part of the stuff of political debate. Should we cut down on the civil service? Curb government spending? Disestablish the Church? Revise defence estimates? Extend the legal system? Where is the line between the classes to be drawn?

By rejecting this debate, we are advocating the return to a blank circle. The free society would be differentiated from primitive society by its mode of production and its level of culture. Its lack of masters or repressive institutions would ensure that man "born free" would live free.