6. The state and anarchism

What, after all, is this State idea, this idea of the organized community to which the individual has to be immolated? Theoretically, it is the subordination of the individual to the good of all which is demanded; practically, it is his subordination to a collective, egoism—political, military economic—which seeks to satisfy certain collective aims and ambitions shaped and imposed on the great mass of the individuals by a smaller or larger number of ruling persons who are supposed in some way to represent the community. It is immaterial whether these belong to a governing clan or emerge as in modern States from the mass partly by force of character, but much more by force of circumstances; they are imposed more by hypnotism of verbal persuasion than by overt and actual force. In either case there is no guarantee that this ruling class or ruling body represents the best minds of a nation or its noblest or its highest instincts.

Nothing of the kind can be asserted about the modern politician in any part of the world; he does not represent the soul of the people or its aspirations. What he does usually represent is all the average pettiness, selfishness, egotism and self-deception that is about him, and these he represents well enough, as well as a great deal of mental incompetence and moral conventionality, timidity and pretense. Great issues often come to him for decision, but he does not deal with them greatly; high words and noble ideas are on his lips, but they are only the clap-trap of a party. The disease and falsehood of modern political life is patent in every country of the world, and only the hypnotized acquiescence even of the intellectual classes in the great organized sham, the acquiescence that men yield to everything that is habitual and makes the present atmosphere of their lives, cloaks and prolongs the malady. Yet, it is by such minds that the good of all has to be decided, to such hands that has to be entrusted; to such an agency calling itself the State that the individual is being more and more called upon to give up his entire activity.

Even if the governing instruments were better constituted and of a higher moral character, still the State would not be what the State idea pretends to be. Theoretically, it is the collective wisdom and force of the community made available and organized for the general good; practically, it is as much of the intellect and power available in the community as the particular machinery of State organization will allow to come to the surface, which uses that machinery but also caught in it and hampered by it, and hampered also by the large amount of folly and selfish weakness that comes up in the same wave. Things would be much worse if there were not a field left for a less trammeled individual effort doing what the State cannot do, employing and using the sincerity, energy, idealism of the best individuals to attempt that which the State has not the wisdom or courage to attempt, getting that done which a collective conservatism and imbecility leave undone or actively oppose and suppress. It is this which is the really effective agent of collective progress. But we are now tending towards such an increase of organized State power and such a huge irresistible and complex State activity as will either eliminate free individual effort altogether or leave it dwarfed and cowed into helplessness.

The State is neither the best mind of the nation nor is it even the sum of the commercial energies. It leaves out voluntary action, suppresses the working force and thinking mind of important minorities, often of those which represent that which is best in the present state of society.

The regeneration of Society, or better still, the formation of a new society, is possible alone through Anarchism, i.e., through the re-establishment of the natural relations of men to one another. This can be accomplished by Anarchist Communism, guaranteeing to each individual full liberty. Each member of such a Society stands free and equal among his fellow beings, and any attempt to establish other standards will constitute an act of violence against the principle of a free society.

There is no natural right for the possession of private property, nor for authoritarian leadership: once permitted, they inevitably destroy the peace arid general welfare. The whole history of mankind proves this statement.

Let us consider Anarchism as the scientific teaching of the natural relationship of men. Realizing that our knowledge of the world reaches no further than our senses can reach, the Anarchist rejects all fruitless speculations of transcendental philosophy; he has scant respect for visionary dreams. All that takes place in the universe is the result of activity inherent in matter. Upon this view is based our moral doctrine, which may be summarized as follows:

Every living being strives unceasingly for enjoyment of life; this endeavor is the basis of all his actions. Each human being seeks to learn by what ways and means he can attain the highest purpose of life.

Through experience and observation one arrives at the conclusion that the individual separated from the society of his fellowmen produces the mere necessities of life by the utmost wearisome labor, but that through the common labor of many, these necessities are easily and readily obtained, allowing leisure for the pursuit of the arts and sciences, by which life is made pleasanter and richer; this knowledge imposes upon one the duty of working for the common weal, since each individual welfare is assured only through universal well being.

The fact that the gifts, powers and dispositions of men are very different leads one to the conclusion that the participation in the various labor of a group or community must be entirely voluntary, free from outward pressure, as free as the right to use and enjoy in unlimited measure the goods produced by common labor.

By experience and clear knowledge of the qualities of man, we arrive at the firm conviction that a lasting welfare of society can be established only through the communistic anarchist society. 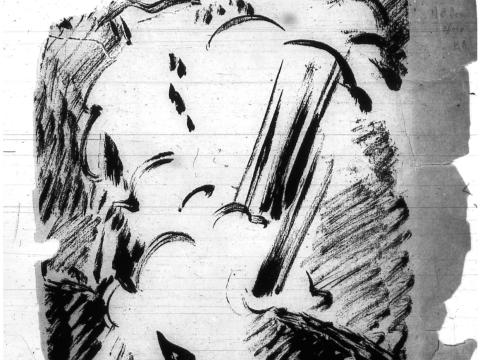 Revolt Vol. I. No. 1 (January 1, 1916). New York, NY. Digitized from microfilm. Images on reel were made from a physically damaged copy.
Image 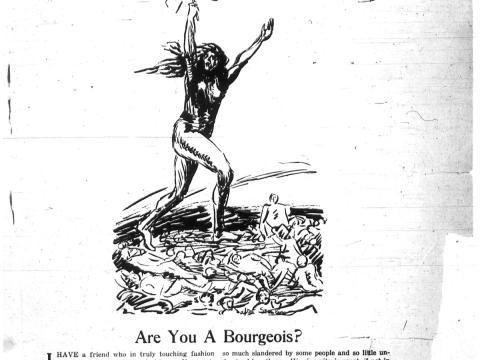 Revolt Vol. I. No. 2 (January 15, 1916). New York, NY. Digitized from microfilm. Images on reel were made from a physically damaged copy.
Image 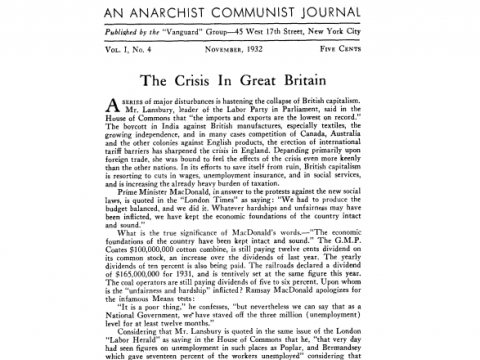 The November 1932 issue of Vanguard, an anarchist journal published out of New York.
Image 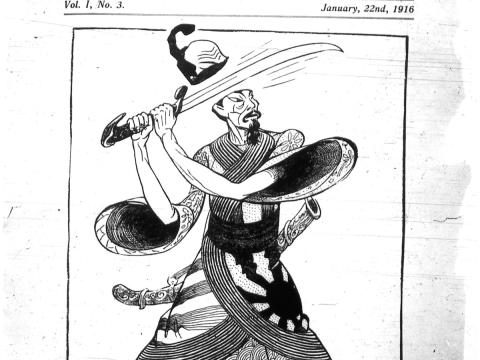 Revolt Vol. I. No. 3 (January 22, 1916). New York, NY. Digitized from microfilm. Images on reel were made from a physically damaged copy.