Arms and the Woman

One of the symptoms of the weakness of the revolutionary movement today is that it has not yet reached the point of giving birth to a qualitative and autonomous expression of revolutionary women. It is known that the degree of development attained by the forces of negation in existing society finds its unequivocal, decisive and obvious manifestation in the relations between revolutionary men and women and in the manner in which the direct and natural relation of the sexes in conceived.

The division of roles of the sexes in alienated society, inherited from feudal society and the first stages of industrial society, can be schematically defined in this way: femininity concentrates the anti-historical tendencies of alienated life (passivity, submission to nature, the superstition that follows from this, repetition, resignation), masculinity its pseudohistorical tendencies (a certain degraded taste for struggle, arrogance, pseudo-activity, innovation, confidence in the power of society, rationalism). Femininity and masculinity are the two complementary poles of the same alienation. In modern industrial society, these two poles tend, in losing their material bases, to blend into each other to constitute the specific traits of the modern proletarian, where the differences between the sexes are less and less marked.

In all epochs, and according to the nature of those epochs, men and women have never constituted two pure types. Whatever their sex, individuals unite, in various ways, the character traits and behavior of the two sexes. Nevertheless, femininity has up till now always been the dominant trait of the alienation of women, and masculinity that of men. But fundamentally, it is the traits of the old femininity which reappear at present in the generalized passivity of the reign of the modern economy, although femininity and masculinity, freed from their material roots, are recaptured arid used indiscriminately by the two sexes, as modes of spectacular affirmation.

While in alienated society woman and man find themselves more and more on a plane of equality (except in the cases where patriarchy still prevails) because the woman cannot find in her male companion - who is as unarmed as she is - an admirable and all-powerful protector; in the modern revolutionary movement, in contrast, the woman begins by being sharply confronted with her old femininity in the face of the domination of a certain theoretical prestige. Because, for the individual who is not involved in theoretical activity, theory appears as an "ability to write," to "think," a product of intelligence, an individual creation full of mystery. This is the spectacle effect; the fetishism of theory for those who find themselves outside it. The woman often finds herself forced to admit that she has "not yet written anything," and that she has no active role in the elaboraion of revolutionary theory, in apparent contrast to certain of the men she sees. In matters regarding theory, her first impulse is to rely on men, who seem to her "more qualified" than her. She ends up distrusting her own thought, paralyzed by external criteria. When she happens to penetrate unexplored terrains, she stops short, thinking that if it hasn't been done before, it must have been because it wasn't worth the trouble. Her thought, when in spite of everything she manages to have some, remains a dead letter: the woman never on her own follows through to the practical consequences of her thought. Often, she judges an individual very quickly, making a pertinent, perceptive critique, even before her male friend or friends; but in her passivity she stops there. When it comes to practical consequences, she hides behind men. Her reflections and her critiques are made in private, leaving masculinity to attend to putting them into practice.

But in this way she deprives herself of a direct grasp on her social environment; she never directly influences anything and thus cannot become a theorist. For theory is the critique of daily life; it is the operation of each individual conducted in this daily life; it is a succession of renewed and corrected interventions in relations with people (which are also the effective terrain of alienation) and, what amounts to the same thing, it is also a series of interventions in society. Theory is an undertaking of revolutionary transformation that implies that the individual theorist accept his own un-interrupted transformation. Theory lies therefore in the comprehension of and action on blocks (individual and social-historical).

If men have an apparently preponderant place in the revolutionary movement, it is because many among them enter the revolutionary struggle with the character traits of masculinity - that is to say, in reality, with as few aptitudes as women, and with the same unconscious complacence regarding their character traits as women have regarding femininity - which can create illusions, since the practice of theory demands imagination, real struggle, confidence in oneself and in the power of the individual, aptitudes; which the masculine character possesses in a degraded form. To convince oneself of this hidden misery of the modern revolutionary movement, it suffices to note that femininity would not be allowed to exist in it without the assent of masculinity, or at least would not be tolerated for long. Feminine passivity has its flip side in masculine activism. Up till now, it is primarily the passivity that has been noted, because it is, the most glaring contradiction in a movement founded on the autonomy of individuals.

Women are only colonized by the spectacle of theory insofar as they are totally exterior to theory. And it is not the example or the intervention of men, themselves largely colonized by this spectacle, that can precipitate women's demystification, that can make them comprehend in vivo what theory is. Henceforth, the passivity of women must be criticized, not superficially because they don't write or don't know how to express themselves autonomously, but at the root, because they don't have any direct and practical efficacy; notably in their relations with others. Equally, it must no longer suffice for a man to "express himself" abstractly. His writings and his thought must directly have concrete effects. Masculinity and its activism must no longer have as a foil femininity and its passivity.

There is an obvious complacence present in the maintenance of these roles. The alienated individual is reluctant to root out what he has repressed; and since masculinity and femininity are complementary, they have all the solidity of natural and inevitable phenomena. In the refusal to combat these roles, there subsists in fact the global acceptance of alienated society. Those who claim to be revolutionaries say that they want to change the world and their own lives. But in reality these individuals hope that they will be changed by a revolution. They thus remain passive individuals, ready to adapt themselves, if they have to, but who fundamentally fear all change. They are quite the opposite of situationists.

The resolution of the deficiencies of revolutionary practice at the beginning of the new epoch now passes directly through the resolution of the deficiencies of revolutionary women; which is to say, also through the supercession of a certain limited masculine practice which has up till now accommodated itself to these deficiencies and their maintenance. It is an urgent objective for the critique of daily life to definitively destroy the inequality of the sexes in revolutionary activity; that is to say, to destroy the respective roles which both sexes establish in alienated life, the character structures of femininity and masculinity and the limitations that they impose on revolutionary experience.

There are two principal types of women in the revolutionary movement: the most numerous at present are the women provided with a protector.They are admitted into the revolutionary milieu with the traits of femininity, because they are presented by a man. The others present themselves: they are admitted as the result of a prestigious past which they have participated in, or for an ideology which they have assimilated well. These latter are admitted with the traits of masculinity, as men are.

Some of these women say absolutely nothing in public, contenting themselves with making remarks in private that they wouldn't otherwise dare to make; or they don't open their mouths except in response to the futile sort of questions that are believed to be the only ones that can be asked of them; or again arbitrarily thrown into "theoretical discussions," anxiously watching out of the corner of their eye for the approval of their protector, they won't dare admit their ignorance of the subject, and entangle themselves in the confusion of their thoughts, or repeat what they've heard said, their difficulties in this domain seeming shameful to them; others openly display their insufficiencies, finding excuses for themselves in the difficulties they have in writing - but only in writing, as an inexplicable calamity - implying that they nonetheless think admirably; or perhaps they recognize in this a feminine defect, and fancy themselves protected, supposing that their honesty guards them from any more direct critique; still others express themselves by means of aggressive demonstrations toward men, to show that they aren't under any man's thumb and that they think autonomously. Each time, it is their colonization by, the spectacle of theory which paralyzes women.

Thus, for the moat part the only relations which remain to women are amorous ones. There they flaunt their sensitivity, ranting in private against theory as being something cold and abstract, and lauding "human relations." Women are often recognized as having greater sensitivity and subtlety when it comes to judging people. In addition, men, having a certain minimum of practical exigence, are considerably more prudent when it comes to critiques that will entail practical consequences. They prefer to admire their female companion for such a capacity, which they claim to possess only in a lesser degree - they had to repress it - and thus justify their relation with this woman: the passivity and public non-existence of the woman must be compensated by a greater hidden richness, and the monogamic justification of the couple is this complementarily of the man and the woman. If sensitivity is still an attribute of femininity, it is because theory is not understood for what it is, since men who are considered to be theorists are considered to lack sensitivity; whereas in fact theory includes the practical application of this sensitivity and this subtlety.

The modern revolutionary movement must destroy this opposition of pleasure/activity, sensitivity/ lucidity, conception/execution, habit/innovation, etc. The femininity/masculinity opposition corresponds to a reified stage of human development.

The individuals colonized by the spectacle of a revolutionary theory are in fact colonized by the need to appear autonomous; they are subject to appearance. As long as theory continues to be understood as a product of intelligence, as the individual faculty of "thinking" and of "writing," and as such, as a possible source of personal prestige, men will continue to want to "express themselves" at all costs and women will lament not being able to imitate them.

It is now a matter of understanding theory for what it is. It is essential that women (and men) no longer accept one's acts being in contradiction with one's words, and no longer accept the existence of critiques without consequences. It is essential to restore to subjectivity all its rights by giving it practical follow-through. No one should be able to be lucid about others without being lucid about himself, or lucid about himself without being lucid about others. The modern revolutionary movement must become unlivable for masculinity and femininity. It must judge individuals on their life. 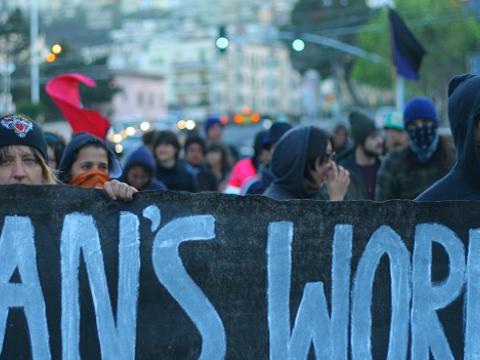 Article on gender and leadership by Emily, a queer materialist feminist from Portland, OR.
Image 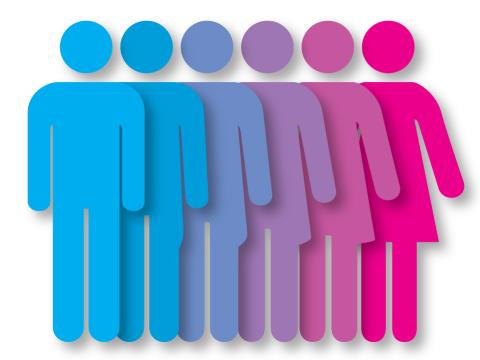 Communization and the abolition of gender

"Present day civilization makes it plain that it will only permit sexual relationships on the basis of a solitary, indissoluble bond between one…
Image 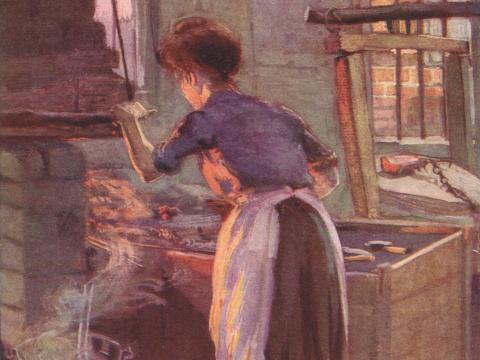 A Class Perspective on the 'Women Question'