WHEN AUGUSTUS JOHN DIED at the age of 83 on October 31st, the newspapers were full of such adjectives as "boisterous, blustering, brilliant" (Daily Herald) and "robust, swashbuckling, romantic" (The Times). Those who saw him as a grave and courteous old gentleman, who, though he was the finest draughtsman this country has produced, was his own severest critic as a painter, must have felt that the papers were talking about someone else – a superannuated Errol Flynn. It is characteristic that none of the newspapers called him an anarchist, which is what he called himself, and that only one of them mentioned that his last public act was to take part in the illegal 'sit-down' in Trafalgar Square on September 17th, organised by the Committee of 100, of which he was a member.
John was a subscriber to FREEDOM and ANARCHY, and a generous supporter of Freedom Press for many years – he always claimed to be our oldest reader. One of his last letters must have been his message of greetings to the Anarchist Ball on October 20th, celebrating the 75th anniversary of Freedom Press, evoking his memories of its founder Peter Kropotkin, and Mr. Anthony Powell recalled last week how "when he did a drawing of me not many months ago, he talked of Verlaine, Moréas, Kropotkin …" His association with the anarchists went back to the 'nineties when he and his sister first came to London to study at the Slade, and "used to attend anarchist meetings in the Fitzroy quarter". There they heard Louise Michel, the 'Red Virgin' of the Paris Commune of 1871: "The little old lady in black made a dramatic figure as, in prophesy, she thrust out a lean and accusatory claw. Gwen and I once attended a party organised for the benefit of David Nichol, a colporteur of anarchist literature, including the journal FREEDOM." At these meetings (John recalled in Horizon, April 1949), "More than once I listened to the voice of Peter Kropotkin. The great and tireless champion of Freedom, correctly attired in his revolutionary frockcoat, beamed on his audience with the true rayonnement of goodness, courage and faith. In him, these qualities, supported by the authority of a scholar, joined in condemnation of society, based, it would appear, on corrupt and insecure foundations: this student of Dante, geographer, anthropologist and historian, pointed the way to a new social order with its roots in the Commune, the fertile bed from which had sprung, in mediaeval times, those flowers of civilisation, the Free City and the Gothic church."

Half a century later, when the editors of FREEDOM were in the dock at the Old Bailey in 1945, there was John in the public gallery, making a fuss about being asked by an official to produce an identity card. He was a sponsor of the Freedom Defence Committee, and a lifelong protester about invasions of civil liberties. Very many years ago, in his monograph on John's paintings, T. W. Earp, referring to his reticence on the non-professional side of his life, noted that "The newspapers, have recorded two characteristic gestures: one was a protest against the refusal of admission to Epsom racecourse of his friends the gipsies; the other, his support of a movement opposing undue restrictions upon the liberty of the subject."

These were indeed, preoccupations of his, ever since, as a boy, he had felt in his father's house "that I was living in a kind of mortuary where everything was dead", while he and his sister, "longing for a wider, freer world than that symbolically enclosed by Tenby's town walls; we craved for Art, Liberty, Life, perhaps Love!" This early sans-culottism, as he called it, "was succeeded by a higher form of anarchism, vehement only in a growing apprehension of the corruptibility of Power, and the moral bankruptcy of the masses, since, Esau-like they have bartered their birthright for a mess of pottage, which is about all the Vote amounts to."
His association with the gipsies began too, in childhood, when he watched them in the market of Haverfordwest. Writing indignantly in FREEDOM ten years ago he observed that, "Moving amidst a usually ignorant and hostile population, the gipsies have developed a technique, by which they may gain a living while preserving their peculiar conventions, their code of manners and their self-respect. They say dukerin (fortune-telling) for the gâjos (gentiles) is one thing and dukerin for the Romanichals another. In the one they use the ritual of cozenage, in the other they speak the truth. In both they are not unassisted by the curious clairvoyance of the illiterate. Under the present drive towards uniformity, subservience, and the sedentary life, they will fuse their morale, their folk-memory and what is left of their language, to sink at last in the underworld of anonymity, petty crime, and squalor. What Hitler accomplished by the lethal chamber, our Bumbles will achieve by a system of harrying and fines. A naturally genial, intractable and somewhat primitive portion of the community, has been condemned by bureaucratic exigency to be stretched on the fatal bed of Procrustes."

The attraction of the gipsies was not for a spurious romanticism, but because "the absolute isolation of the gipsies seemed to me the rarest and most unattainable thing in the world." Isolation is a curious word to couple with that of Augustus John, the least solitary of men, whose conviviality was legendary, yet as a painter he was an isolated figure. FREEDOM's critic Arthur Moyse (whom John himself admired for his perception and integrity), remarked last month that "Too much of an intellectual, John could not leave a canvas or a subject alone and too often his constant repetition and overwork killed the humanity that gave birth to the original creation." And John himself recognised in a poignant passage that "The ruined canvases which encumber my studio bear witness to a sad lack of system. Foresight, calculation, patient planning have not been within my grasp." Yet it was his intellectual qualities (John was a reader of Freud and Reich and the modern anthropologists as well as of the French classics) which gave so many of his portraits their immense comprehension of the whole character as well as the physionomy of their subjects – which is why so many of his sitters were disappointed by them. Consider his portrait of Lady Ottoline Morrell (No. 28 in the Phaidon volume) which tells us all, and more, than we know of her from the literary reminiscences of the period, or his portrait of Thomas Hardy (in the Fitzwilliam Museum), which made Hardy remark "That's exactly how I feel", or his portrait of Governor FulIer (shown at the big John exhibition in London in 1954) from which, as the Listener's critic remarked at the time, "one can see exactly the kind of man upon whose decision the lives of Sacco and Vanzetti hung."

John always regretted that he lived in an age when public art and architecture were at such a low ebb. "When one thinks of painting on great expanses of wall, painting of other kinds seems hardly worth while". But in the few very large pictures which he painted – the unfinished Lyric Fantasy or the huge cartoon Galway in the Tate, and in the lyrical sunlit groups of women and children in the French or Welsh landscape – there are glimpses of a golden age of the imagination, a youthful utopian dream of life, which makes us assent to his question "Does it not seem as if the secret of the artist lies in the prolongation of the age of adolescence with whatever increase of technical skill and sophistication the years may bring?"
In his fragments of utopian speculation which we print in this issue of ANARCHY (John's version of Fourier is much more attractive than

Fourier's own), the vision of a free society is seen with a painter's eye. The Nomads by the river are John's gipsies, the "magnificent children" by the roadside are ravishing children of John's family groups, even his odd recommendation of the initiatory rites of the Baptists comes from his recollection of such ceremonies in his Welsh childhood where "the girls with their skimpy black frocks, saturated and clinging, emerged like Naiads from the ordeal. Without making these observations at the time, I admired the spectacle …"
Few of us would be unwilling to share the vision of life which this great lover of life has left us. 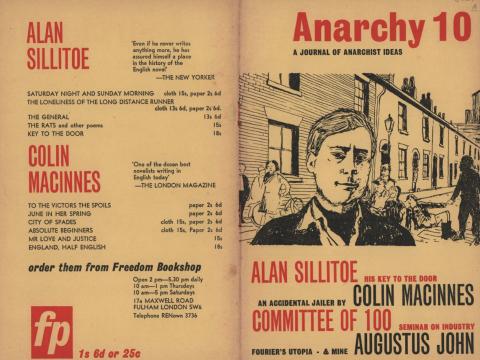 Issue of Anarchy magazine from December 1961