Bethnal Green - A Museum of Housing

THE PREFABS I HAD COME TO SEE IN BETHNAL GREEN were put up a month ago by the London County Council on some of the pockets of land awaiting re-development, as a stop-gap measure because of the manifest failure of housing to keep pace with employment in London. The idea is that when the site is permanently re-developed, in, say, five years, the house is picked up and moved elsewhere. (Not with the tenants in: they are expected to have been found accommodation by then).

Compared with the prefabs of the immediate post-war years, they struck me as the product of a joinery shop rather than of an aircraft factory. They are better looking, better heated and insulated, but very much smaller. They look like kiosks at the entrance to an exhibition, or like classrooms which have somehow become detached from a new primary school. The real problems of prefabrication — as a means of providing more homes more quickly and at a lower cost are not touched upon here. But that was not the intention. If you were homeless you would regard one as heaven; if you were a housing manager you would see them as a confession of failure.

Within a stone's throw of the new prefabs I saw some of the old prefabs of 1946, which, some of you may remember, were supposed to have a life of ten years. They are still there, in the little gardens which the tenants have planted around them. "No, I don't want to leave it for one of those flats," one of the tenants told me. And she brought me face to face with the endless argument about Bethnal Green, in which normally unemotional words like dog, rabbit-hutch, backyard and parlour, are ranged against phrases like "sea of asphalt", "inhuman scale", "sanitary desert" and so on. The new prefabs are simply the latest, temporary exhibit in what is not only a sociologist's zoo, but an architectural museum. It's all there, every mean or patronising or sentimental or brutal or humane assumption about the housing needs of the urban working class.

And as I wandered through these streets I could see the argument documented in a hundred years of rehousing. The oldest exhibit,

Baroness Burdett-Coutts' Columbia Square housing, completed exactly a hundred years ago, is being demolished at this moment. Grim, with gothic trimmings, nobody mourns it, except perhaps members of the Victorian Society — who never had to live there. The Baroness, a banking heiress with Charles Dickens as her mentor, set out to replace a squalid slum called Nova Scotia Gardens with model workmen's tenements. "You cannot fail to be struck," Dickens told her. "by the consideration that if large buildings had been erected for the working people, instead of the absurd and expensive separate walnut shells in which they live, London would have been about one-third of its present size." Her architect, H. A. Darbishire, believed in healthy draughts, and ensured that a high wind blew from the central staircases set in huge open arches, through the wide access gallery running the length of the five-storey blocks. Darbishire went on to build the adjacent and far more sumptuous Columbia Market, for which a use could never be found, as well as the first of the Peabody Trust's Buildings — Columbia Square was lavish compared with them.

Every Liverpool Street commuter knows the next exhibit, the endless parallel blocks of the Improved Industrial Dwellings, where Alderman Waterlow expected a net return of six per cent on his philanthropic capital. Ninety years later, after the successful direct action of the tenants last year — a rent strike and spectacular demonstrations, the Minister confirmed a compulsory purchase order on the grounds that the rents which have been progressively increased in the last few years "are exorbitant for what the tenants are getting or seem likely to get." Millicent Rose once remarked that the chief architectural feature of these blocks is the galvanised iron tub hanging on a nail outside every scullery window, revealing that there is not a single bathroom in the place.

Nor for that matter were bathrooms provided in any of the London County Council's own flats until after the First World War. But when we turn to the Boundary Road Estate. the first great slum clearance scheme of the infant LCC in the eighteen-nineties, we are in a different world from that of either the Baroness or the Alderman. It replaced a notorious slum — the Jago of Arthur Morrison's novel, where one child in four died in infancy. Short, tree-lined avenues radiate from a central circus with a bandstand in the middle, and laundries, workshops and sheds for coster-mongers' barrows were included. Several young architects in the LCC's newly-formed department worked on the scheme, each doing one section — which explains the unforced variety of the estate. They were influenced by the socialism of William Morris and by its architectural expression in the work of Philip Webb, though they handled the vernacular idiom more freely and unselfconsciously than their master. These buildings, with their romantic skyline and lovingly-handled durable detailing, have weathered well, and today in their autumnal severity, stand out like the same architects' Millbank and Webber Row estates in other parts of London, as some of the finest work of their period. The architectural verve and warmth of feeling towards the people who were to live in the new flats did not survive long in the LCC architect's department, which did not recover that spirit until the nineteen-fifties.

The blocks of flats of the interwar years whether the mechanical neo-Georgian of the LCC with its heavy brick access balconies, or the even more nondescript work of the Bethnal Green Borough Council, seems windswept, institutional and faceless. I walked past rows and rows of such blocks before suddenly coming upon the Borough Council's recent "cluster" block in Claredale Street. The architect, Denys Lasdun has sought here to provide vertically for that horizontal matey neighbourliness which we have been taught to associate with the tight little terraces of old Bethnal Green — freed now from the stigma of slumdom by the depopulation of the borough. (130,00 people lived there in 1901. By 1919 this had fallen to 68,000; in 1951, 58,000 and in 1955, 54,000). "Dilapidated but cozy, damp but friendly," observed Young and Wilmott, "in the eyes of most Bethnal Greeners these cottages are the place, much more so than the huge blocks of tenement buildings standing guard, like dark fortresses, over the little houses." I could not decide, on the strength of a casual visit, whether Mr. Lasdun's experiment was a dark fortress or a vertical street. He hoped, by bringing the short wings of this block (which cluster around a central core containing lifts and services), within talking distance of each other to reduce the isolation which many tenants of the new flats complain of. A survey by Willmott and Cooney suggests that he has not really succeeded in this aim, but at least he hasn't pursued it at the expense of anyone's privacy. He has contrived to make a very large tall building conceal its bulk and maintain the scale of its surroundings.

The external surfaces of this building are of unclad concrete, straight from the shuttering, even in the entrance, where the children have chalked nuclear disarmament signs, "Kevin loves Sheila" and so on. Personally I am nearly as fond as Jack Robinson of writings on walls, and I adhere to the architectural philosophy suggested to me by Giancarlo de Carlo, that the occupants of our buildings must "attack" them, to make them their own. I like the scribblings, but do the tenants? It's hard to get chalk off rough concrete anyway. Has Mr. Lasdun misjudged the mood of Bethnal Green, where — in Nelson Street under the shadow of one of the less appetising LCC blocks, one householder has painted the entire elevation of his two-storey house green, with every mortar joint picked out in white, or where in Teesdale Road, whose three-storey houses are built in those hard red shiny bricks from the Midlands, another has set to work to make them even redder and shinier by painting them a glossy maroon?

Hasn't, in fact, the New Brutalism come at just the wrong moment to a Bethnal Green where the celebrated Mums have begun to read the gracious living magazines, where the girls all look like Helen Shapiro, and the children in their blazers exercise their poodles — unless they live in the dogless flats?

My fewest misgivings in Bethnal Green were when I saw some of the recent work of the LCC architects. The Avebury Estate in Gosset Street, for example — a mixture of high and low buildings. Here, in a gesture of neighbourly recognition, the entrance to Lygon House frames a vista of some of the mid-nineteenth century terraces. Lorden Walk, a low staggered terrace of gabled cottages, pays homage — rather fussily — to an earlier urban tradition. Eversley House actually has sculpture outside. Better, perhaps, architecturally, are their very latest jobs like the little square carved out of Elsworth Street, where the detailing is robust and quite free from municipal gentility.

What the cluster blocks and the latest LCC work have in common is that they have turned their back on the mechanical repetitive geometry of layout which characterises almost all the older re-development in the borough.

After a hundred years of rehousing in this battered East London borough we are still just learning how to do it. We know what the problem is. How to provide high density urban housing which has that particular kind of amenity and intimacy and shelteredness that people persist in associating with the word home. Any citizen of Bethnal Green will tell you that in different words. A few architects can show you how to do it. The LCC architects themselves are attempting it in their experimental housing now being built in Angrave Street, Shoreditch.

Most architects can tell you that the principal obstacles are not technical or aesthetic or even financial, but are simply the restrictions imposed by building bylaws and regulations. In their reaction against squalor, overcrowding and poor ventilation, the architects of the old tenements prescribed howling gales for their tenants deliberately. Today we provide draughty access balconies way up in the air, absent-mindedly, and pretend that draughts don't exist. We have to build high and wide-apart, because the regulations don't allow us to build compactly even when we build low. Is it surprising that, given our climate, the word that sums up what the old Bethnal Green has and most of the new Bethnal Green hasn't is … "domesticity". 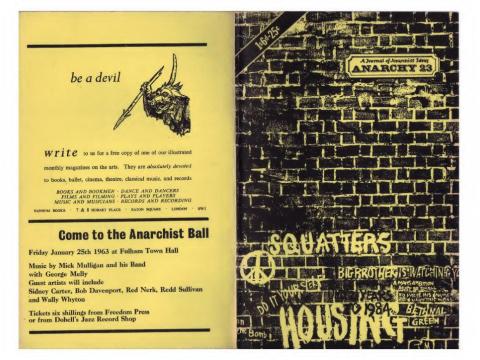 Issue 23 of Anarchy magazine from January 1963 on housing and direct action. 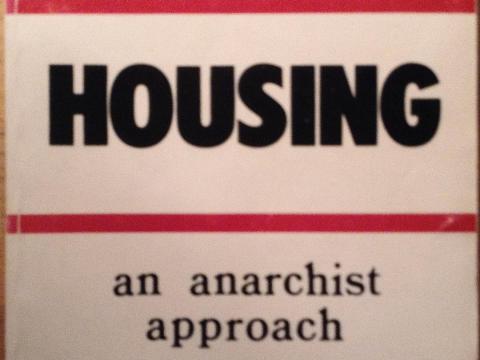 Collection of essays on housing and the built environment from 20th century British anarchist and town planner, Colin Ward. First published by…

A grassroots history of housing, by Colin Ward. 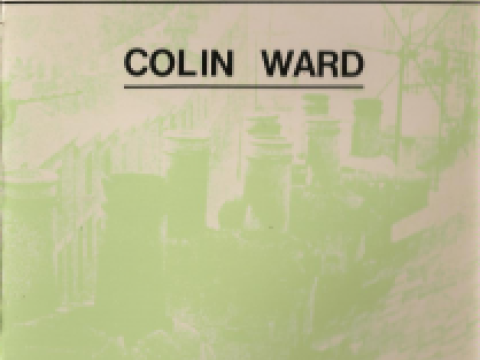 Housing is theft - housing is freedom

A rare pamphlet, where Ward talks on one of his favourite subjects – housing – and how anarchists have dealt with it within the confines of state…