In early 1998, around Australia, thousands of workers massed in solidarity with the Maritime Union of Australia. “MUA HERE TO STAY,’’ they chanted. Many workers and socialists were hoping that the tide had turned, that unionism was returning as a growing force in the Australian political landscape. The pickets, the rallies and the overwhelming sense of solidarity contributed to the determined resistance and the euphoria surrounding the victory in the High Court which permitted the wharfies, who had been sacked by the stevedoring company, Patricks, to return to work.

In the following years, it became clear that the optimism of the period did not translate into a resurgence in union membership. The membership levels of unions continued to fall, particularly in the private sector. In 1960 union membership was about 60% of all workers, by 1998 it had fallen to approximately 30% and in 2005 it fell below 20%. The graph overleaf illustrates the broad trajectory of trade union membership levels in Australia throughout the 20th century and into the 21st century.1 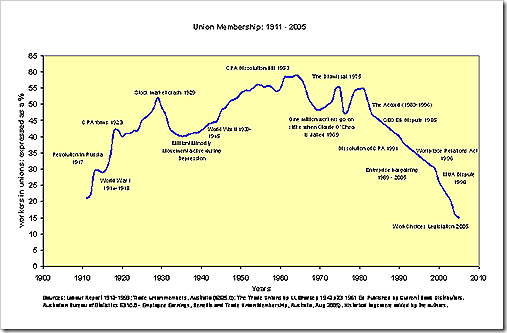 From the beginning of the First World War to the beginning of the Second World War the number of trade union members nearly doubled, in spite of the difficulties faced during the Depression. After the Second World War the efforts of the union militants were rewarded with strong union participation by the working class in the 1950s and 1960s. This period saw unions at their strongest at the May Day, Eight Hour Day or Labour Day celebrations (depending on which State you were in). Rank upon rank of union members marching proudly down streets in towns and cities were clapped along by crowds of onlookers, family, friends, and other supporters. None of this would probably have been possible without the hard organising work done in the 1930s by the communists in the militant minority movement, the unemployed workers’ unions and others.

So began the news story in the Sydney Morning Herald reporting the 1927 timber workers’ struggle in its usual sensational anti-worker style.2

The report continued with time-worn stereotypes of worker and unionist:

Riotous scenes unprecedented in Australian trade union history were witnessed in the city last night when the striking timber workers, led by the Communists, held a street procession and demonstrated as a protest against the Lukin award.3

In defiance of warnings by the Federal authorities and the police, ballot papers were collected from the strikers, placed in a large canvas bag, saturated with kerosene, and publicly burned in a kerosene tin outside the Trades Hall. Later an effigy of Mr. Justice Lukin was burned by the Communist section of a crowd in Hyde Park although an undertaking had been given to the Commissioner of Police by Mr. J. S. Garden that this would not be done.

Traffic was blocked and standing room was scarcely possible. As the ballot papers, saturated with kerosene, burned brightly, the ‘Red Flag’ and ‘Solidarity Forever’ were sung. Derisive jeers for Judge Lukin followed and then orders were shouted from a Trades Hall balcony for the men to take their allotted places in the procession.

Posters displayed were ‘Lukin award means – heads the bosses win, tails the workers lose.’ ‘Result of the secret ballot can have no effect on the award; award must continue whatever the result of the ballot may; therefore, this ballot is the best joke of the year.’

Notwithstanding the sensational reporting, the story shows that the approach to advancing workers interests was clearly based in the militant collective action of the workers themselves. Seventy years later, events leading up to the 1998 MUA dispute showed glimpses of this strategy.

In the ongoing dispute with Patricks Stevedores, CEO Chris Corrigan sacked 55 wharfies in Sydney in 1994. The wharfies took their redundancy payment cheques to the Waterside Workers Federation offices to be put in a plastic bag until the dispute was over.4 After the men were re-instated the then MUA national secretary, John Coombs, took the cheques and dumped them on Corrigan’s desk.

Solidarity from the other unions and the community in the 1998 MUA dispute was also a flashback to the past, mirroring support received by the Timber Workers of 1929. However, more often than not, current trade union strategy is subsumed in legal manoeuvring, not the defiant burning of ballot papers by strikers.

The right to organise

Unions now struggle for relevance in Australian social and industrial worlds, yet they are needed just as much as at any time in the past 120 years. In the capitalist system, workers engaged in the selling of their labour remain in fundamental opposition to the employers who benefit from their exploitation of workers. It is also still true that workers are best served by unions that organise to represent them as a collective whole.

While the opponents of unions have ridden high since the election of the Howard Government, it may be comforting to think that it was easier to combat these opponents in the past. However, this is not the case. Over forty years ago, Jack McPhillips, former assistant national secretary of the Iron Workers Union, said:

“Workers won the right to organise, form unions and act together to defend and improve wages and working conditions only after bitter struggle against the combined forces of employers and governments.

Moreover the media has stood against workers and their unions since their very beginnings:

“The trade unions are, we have no doubts, the most dangerous institutions that were ever permitted to take root under the shelter of the law in any country’ (The Morning Post, 29 March 1834).”

Unions are now accused in the media of pursuing sectional interests against the common good. For instance, while the Maritime Union of Australia (MUA) and its predecessors, the Seamen’s Union and the Waterside Workers Federation, had struggled hard to win good wages and conditions for their members in the 1950s the union continued to be vilified in the mass media as a corrupt organisation rorting the system on behalf of a privileged group of workers. So effective was this propagandising by the media that many within the working class to this day believe that wharfies had it easy and that the system needed reform.

The mass media took up the Federal Government’s portrayal of the 1998 MUA dispute as a dispute about wharf productivity. However the working class movement understood instinctively that the allegations of low container loading rates were an assault on the union’s right to collectively organise.

The dispute showed workers’ employment contracts were not legally enforceable and only had weight through the collective strength of waterside workers’ organisation. Corrigan’s use of labour hire companies to lock out the wharfies and rob them of their entitlements was only possible because there had been a serious decline in the industrial power of workers and unions since the early 1970s.

The 1996-2007 Federal Government continued the assault on the organised working class by successive governments, undertaking to get rid of collective bargaining and the right to strike. One of the strategies was the introduction of secret ballots, designed to undermine decision making. Secret ballots are part of the arsenal of employers in isolating workers, creating fear and eroding the solidarity between workers, and so diminishing their collective strength.

During its history, the union movement overcame attacks such as these and established certain minimum union rights. These rights became an integral part of the struggles to defend and improve living standards.