... Mr. Engels, an enemy of the interview, was kind enough to make an exception for us and let us have his impressions.

"What do you think," we asked him, "of the recent outrages in Paris committed by the anarchists?"

"I can only see in them the work of agents-provocateurs who have been paid to try to dishonour the parties in which they play a part. The government has every interest in the occurrence of these explosions, as they simultaneously serve the interests of the bourgeoisie in general and the intrigues of certain political groups in particular. In fact the intention is to panic the population, organise terror and lead a reaction.

"The same procedure was employed in Germany recently at the time of the 'Berlin troubles.' Here again we would do well to seek out the hand of the police. It is indisputable that on the first day of these allegedly socialist demonstrations some of our people may have been involved in the movement, but our erring friends soon realised the true character of the demonstration and withdrew from it immediately.

"The proof is that several shops belonging to known socialists were looted. The trial of the detained rioters showed that the leaders were anti-Semites seeking to exploit the hunger of a few poor wretches by getting them to shout: 'Down with the Jews!'

"In Italy -- again the same set-up with the proceedings instituted against Cipriani and the other anarchists. There, too, the actions of the agents-provocateurs have been exposed in open court.

"But that does not always work. In Paris there were one or two wretches willing to play the police's game, but nobody except the police themselves will be able to claim that they belong to the socialist party."

"Do you not fear that all these domestic upheavals will lead the governments to look around for a distraction in a continental war? Take your Emperor William, for example..."

"No. It is my wish that Emperor William may enjoy a long life, for thegreater good of the German socialists," said Mr. Engels, laughing. "Anyway, I don't believe there will be a war in the immediate future."

"The alliance between Russia and France has not caused you any apprehension on this score?"

"Not at all. Last year, perhaps, there was a slight inclination to take the offensive. The demonstrations in Cronstadt, the very visible advances which imperial Russia made to republican France may have appeared suspicious. The concentrations of troops on the border also appeared to give cause for some alarm. But today things are quite different.

"In fact, Russia would like to go to war, but it could not do so. At present it has to face an enemy more redoubtable than any other: famine.

"This scourge was not the result of a passing shortage caused by some climatic or other accident: it is the outcome of the new organisation of Russian society.

"Since the Crimean War, when entire regiments perished in the snow, the situation has changed considerably. This war marks the start of a major crisis in Russian history. When defeat was complete, when Russia's powerlessness had been demonstrated to the whole of Europe, Tsar Nicholas, in despair after ascertaining the woeful state of his empire, did not hesitate to poison himself. On ascending to the throne, Alexander II was therefore obliged to try to find a solution to the appalling situation in which his country found itself."

THE CAUSES OF THE FAMINE IN RUSSIA

"That was when the Tsar proceeded to emancipate the serfs, which provided an excuse for a new redistribution of land between the nobles and the peasants. The nobles were given the best land, as well as the lakes, rivers and forests. The peasants received only land of inferior quality, and this distribution was done in an inadequate manner and for a sum repayable in annual instalments over a period of 49 years! What was the outcome?

"The peasants were unable to meet the payments to the state and they had to borrow: they had too much to die and not enough to live on. A gang of kulaks (money-lenders) pounced on these tillers of the soil, who gradually became indebted to such an extent as to lose all hope of ever freeing themselves. When the usurers were no longer willing to provide advances, the peasants were forced to sell their harvests to obtain money, and they sold not only the wheat they needed to live on but also their vital seed-corn, so that future harvests were jeopardised.

"In these circumstances the first poor harvest would be sure to result in a full-blown famine. This famine, in turn, has just delivered the final blow to agricultural production in Russia. In effect, the peasant, no longer able to feed his livestock, has been forced either to slaughter them or to sell them off. Now, without farm animals, it is not possible to till or manure the land. As a result, agricultural production will be interrupted for many years to come.

"The emancipation of the serfs was only one aspect of the economic revolution which has occurred in Russia; the other aspect is the artificial creation of an industrial bourgeoisie destined to serve as an intermediary class. To fasten the process, a truly prohibitive system was established, favouring and developing Russian industry in an extraordinary fashion; but as this industry was not able to export, it needed a domestic market. Now the Russian peasant hardly buys anything, accustomed as he is to making everything himself: houses, tools, clothes, etc.; not long ago he even produced wooden, iron and leather articles which he sold at the fairs. But when the peasant was deprived of wood by giving the forests to the nobility, rural industry all but collapsed. Manufacturing industry came along to finish it off, and the peasants were obliged to resort to it. At the very moment when this industry was about to triumph, famine arrived to deal it a mortal blow: the peasants are no longer able to buy anything it produces, and the ruin of the one leads to the ruin of the other."

THE ECONOMIC AND MILITARY SITUATION

"So in your view the economic situation in Russia will prevent it from thinking of going to war?"

"Yes. I am not exaggerating when I say that the picture which Vauban and Boisguillebert painted of the French peasant in the seventeenth century can be applied to the Russian peasant, today reduced to eating grass. The transition from the feudal regime to the bourgeois regime in France was not accomplished without upheavals; in Russia it has just produced a crisis which, from being acute, threatens to become chronic. For all these reasons, the Russians are more concerned at the moment with eating rather than fighting."

"I was going to mention that. It is an enormous setback. The French bourgeoisie, which is much given to talking about revenge, did not push its patriotism to the point of opening its purse. The Tsar's government asked for twenty million pounds sterling; all they got was twelve..."

"It has been said that the Rothschilds contributed to the failure of this loan in order to avenge their fellow-believers who have been persecuted by the Russian government?"

"I have attacked the Rothschilds enough to be able to defend them against the charge of being so stupid. As bankers, the Rothschilds are only concerned with their own interests, interests which amounted to extracting the biggest possible commissions and exploiting as many gullible fools as possible. That's all."

"To sum up, you do not believe in the power of Russia?"

"Russia, while strong in defence, is not strong in attack either at sea or on land. I have shown you that the economic situation does not permit it to indulge in dangerous and costly ventures. If we examine its military Organisation we shall see that Russia does not pose a danger from this angle either.

"In the event of war it would not put more men into the line than it currently has under arms. The reserves do not exist except on paper and, although it may have thousands and thousands of men, it has no reserve officers to command them. Where would it get them from? From what source?

"In Germany we have fifty per cent more reserve officers than we need. In this respect would not France also be in a position of relative inferiority?" our interlocutor asks us.

"Not at all," we reply. "In France we do not have more officers than we need; but the officers and NCOs are at full strength."

"I am not in the slightest dismayed," says Mr. Engels. "I do not wish to see the German army strong enough to conquer all Europe. In order to attain our goal, the liberation of the European working class may need a powerful France, the master of its own fate, as well as a Germany that enjoys the same advantages. Your compatriot Saint-Simon was the first to proclaim the necessity of an alliance between France, England and Germany as a primary condition for peace in Europe.' That is the true 'Triple Alliance'."

"In conclusion, let us put it to you that you have painted a rather gloomy picture of the situation in Russia."

"Not at all. Look, would you like to hear an anecdote? You know that in order to aid the starving Russian peasants it was decided to send them wheat from the Caucasus, where they had a surplus. Orders were given to this effect; the wheat was gathered together in large quantities and waggons were sent to transport it. Well, what happened was that the empty waggons were grouped in such large numbers that congestion occurred: the wheat was alongside the waggons, and the waggons could not leave. On learning of this, the Tsar went into a violent rage and sent a general to the scene; this military man made a lot of noise, announced that everything was proceeding normally and only managed to send off a few trains: the greater part of the wheat rotted where it was! What would have happened in the event of mobilisation? Russia does not have many railways yet, and its officers do not even know how to use them."

THE QUESTION OF ALSACE-LORRAINE

"One more question: what about Alsace-Lorraine, the cause of all the disagreements? Do you believe in a peaceful solution acceptable to both France and Germany?"

"I hope that the German socialist party will be in power in ten years or so. Its first concern will be to put the people of Alsace-Lorraine in a position to decide their own political future. Consequently the question will be settled without a single French soldier having to stir. On the contrary, a war between Germany and France would be the only means of preventing the socialists' coming to power. And if France and Russia in alliance attacked Germany, the latter would defend to the death its national existence, in which the German socialists have an even greater interest than the bourgeoisie. The socialists, then, would fight to the last man, and would not hesitate to resort to the revolutionary means employed by France in 1793."

First published in L'Eclair, April 6, 1892 and in an abridged form in Le Socialiste, No. 82, April 16, 1892 Printed according to L'Eclair checked with Le Socialiste Translated from the French Transcribed by Zodiac, 1996 Html Markup in 1999 by Brian Basgen

Interview with Friedrich Engels in The Daily Chronicle, June 1893

Interview with Friedrich Engels in Le Figaro, May 1893 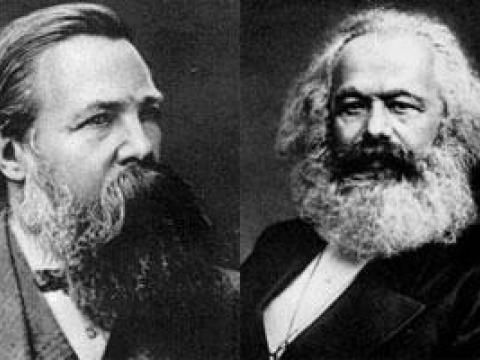