Letter to Frederick Engels (in Manchester)

Sometime ago London workers sent an address about Poland to Paris workers and summoned them to common action in this matter.

The Parisians on their part sent over a deputations headed by a worker called Tolain, the real workers' candidate at the last election in Paris, a very nice fellow. (His companions too were quite nice lads.) A public meeting in St. Martin's Hall was summoned for Septemeber 28, 1864, by Odger (shoemaker, president of the Council here of all London trade unions and also especially of the Trade Unions Suffrage Agitation Society, which is connected with Bright), and Cremer, mason and secretary of the Masons' Union. (These two organized the big meeting of the trade unions in St. James's Hall for North America, under Bright, ditto the Garibaldi demonstrations.) A certain Le Lubez was sent to ask me if I would take part on behalf of the German workers, and especially if I would supply a German worker to speak at the meeting, etc. I provided them with Eccarius, who came off splendidly, and ditto was present myself as a mute figure on the platform. I knew that this time real "powers" were involved on both the London and Paris sides and therefore decided to waive my usual standing rule to decline any such invitations.

(Le Lubez is a young Frenchman, i.e., in his thirties, who has however grown up in Jersey and London, speaks English excellently, and is a very good intermediary between the French and English workers.) (Music teacher and French lessons.)

At the meeting, which was packed to suffocation (for there is now evidently a revival of the working classes taking place), Major Wolff (Thurn-Taxis, Garibaldi's adjutant) represented the London Italian Working Men's Society. It was decided to found a "Working Men's Internatinoal Association", the General Council of which should be in London and should act as an "intermediary" between the workers' societies in Germany, Italy, France, and England. Ditto that a Genreal Working Men's Congress should be summoned in Belgium in 1865. A provisional committee was appointed at the meeting: Odger, Cremer, and many others, some of them old Chartists, old Owenits, etc., for England; major Wolff, Fontana, and other Italians for Italy; Le Lubez, etc., for France; Eaccrius and I for Germany. The committee was empowered to coopt as many members as it chose.

In these two meetings which I had missed -- that of the subcommittee and the subsequent one of the whole committee -- the following had taken place:

Major Wolff had handed in the reglement [statutes] of the Italian Workers' Societies (which possess a central organization but, as later transpired, are really associated benefit societies) to be used for the new association. I saw the stuff later. It was evidently a compilation of Mazzini's, so you alredy know the spirit and phraseology in which the real question, the workers' question, was dealt with. Also how nationalities were shoved in.

In addition an old Owenite, Weston -- now a manufacturer himself, a very amiable and worthy man -- had drawn up a program of indescribable breadth and full of the most extreme confusion.

The subsequent general committee meeting instructed the subcommittee to remodel Weston's program, ditto Wolff's regulations. Wolff himself left in order to attend the Congress of Italian Working Men's Associations in Naples and get them to decide on joining the London Central Association.

Another meeting of the subcommittee -- which I again failed to attend, because I was informed of the rendezvous too late. At this a "declaration of principles" and a new version of Wolff's statutes were put forward by Le Lubez and accepted by the committee for submission to the general committee.

The general committee met on October 18.

As Eccarius had written me that delay would be dangerous, I appeared and was really frightened when I heard the worthy Le Lubez read out an appallingly wordy, badly written, and utterly undigested preamble, pretending to be a declaration of principles, in which Mazzini could be detected everywhere, the whole thing crusted over with the vaguest tags of French socialism. Added to this, the Italian statutes were taken over in the main, and these, apart from all their other faults, aim at something which is in fact utterly impossible, a sort of central government of the European working classes (with Mazzini in the background, of course). I put up a mild opposition and after a lot of talking backwards and forwards Eccarius proposed that the subcommittee should submit the thing to further "editing". On the other hand the "sentiments" contained in Lubez' declaration were voted for.

Two days later, on October 20, Cremer (for the English, Fontana (Italy), and Le Lubez assembled at my house. (Weston was prevented.) Hitherto I had never had the documents (those of Wolff and Le Lubez) in my hand so could not prepare anything, but was firmly determined that if possible not one single line of the stuff should be allowed to stand. In order to gain time I proposed that before we "edited" the preamble we should "discuss" the rules. This took place. It was an hour after midnight by the time the first of forty rules was agreed to. Cremer said (and this was what I had aimed at): We have nothing to put before the committee, which meets on October 25. We must postpone the meeting til November 1. But the subcommittee can get together on October 27 and attempt to reach a definite conclusion. This was agreed to and the "papers" "left behind" for my opinion.

I saw that it was impossible to make anything out of the stuff. In order to justify the extremely strange way in which I intended to present the "sentiment" already "voted for", I wrote an Address to the Working Classes (which was not in the original plan: a sort of review of the adventures of the working classes since 1845); on the pretext that everything material was included in the address and that we ought not to repeat the same things three times over, I altered the whole preamble, threw out the declaration of principles, and finally replaced the 40 rules with 10. Insofar as international politics come into the address, I speak of countries, not of nationalities, and denounce Russia, not the lesser nations. My proposals were all accepted by the subcommittee. Only I was obliged to insert two phrases about "duty" and "right" into the preamble to the statutes, ditto "truth, morality, and justice", but these are placed in such a way that they can do no harm.

At the meeting of the general committee my address, etc., was agreed to with great enthusiasm (unanimously). The discussion on the method of printing, etc., takes place next Tuesday. Le Lubez has a copy of the address to translated into French and Fontana one to translate into Italian. (For a state there is a weekly paper called the Bee-Hive, edited by Potter the trade unionist, a sort of Moniteur.) I myself am to translate the stuff into German.

It was very difficult to frame the thing so that our view [Engels and Marx] should appear in a form acceptable from the present standpoint of the workers' movement. In a few weeks the same people will be holding meetings for the franchse with Bright and Cobden. It will takes time before the re-awakened movement allows the old boldness of speech. It will be necessary to be fortiter in re, suaviter in modo [bold in matter, mild in manner]. As soon as the stuff is printed you will get it....

The Nationalisation of the Land 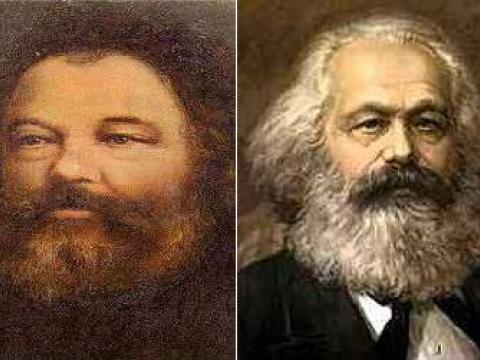 Letter To the Editor of Berliner Reform