Neither Species 8472 Nor The Borg: No War but the Class War - Melancholic Troglodytes

Neither
Species 8472 Nor The Borg:

No War But
The Class War

'They use flags first to
shrink-wrap peoples' minds and smother thought, and then as ceremonial
shroud to bury the willing dead.' -Arundhanti Roy

The Borg's diplomatic panache
seems to have been pirated by the US Bourgeoisie. American military
radio broadcasts to the Taleban carry an ominous message of doom and
assimilation: 'You will be attacked by land, sea and air ... Resistance
is futile'!! The Taleban (Species 8472), for their part, are quite oblivious
to the tractor beams and photonic charges of their nemesis. Their mastery
of fluidic space has conditioned them to thinking of themselves as pure,
superior and invincible. Even as the bombs rain down on them, the Taleban
insist on viewing the Borg as decrepit and decadent, hence their battle
cry: 'The weak will perish'!!

The proletariat is caught between
these two poles of demagogic imbecility. Superficially it seems that
the class struggle has been suspended in favour of false unities based
on nationalism and religion. Yet the very exhibitionism of hegemonic
ideologies (the obligatory flag-waving in the 'west' and the pathetic
shrieks of Allah-o-Akbar in the 'east') intimates a sense of insecurity.

In Britain the media has kicked
up a great deal of dust over a junior civil servant's indiscretions.
The culprit, Joe Moore, an aide to the Secretary of State for Transport,
has been vilified for trying to 'bury' bad news using the September
11 massacre as cover.

The scandal serves to conceal
the three-tiered system of complicity that is emerging:

(i) First there are governmental
cover-ups and Joe Moore's self-serving antics would be a mundane example
of that. We expect further bad news about stealth taxation, benefit
cuts and more draconian laws to be 'mishandled' in the coming weeks.
(ii) At a higher level of significance are capital's cover-ups with
regard to labour restructuring. The airline industry, for instance,
has always been a sensitive barometer of recession and has, therefore,
devised intricate plans of 'crisis-management' over the years. These
plans were accelerated the moment the gravity of the attacks became
evident. Thousands of workers have been laid-off both in Britain and
the USA (where in total 200,000 proletarians have lost their jobs since
September 11). The massive subsidies that in previous times would be
used to maintain the work-force are being used this time round exclusively
to increase the organic composition of capital, so that the airlines
can hit the ground running as soon as the recession is over. The recent
closing down of a Xerox plant at Gloucestershire suggests the slow-down
is reaching the service sector of the British economy. Globally, the
impending slumps in the dot.com industry as well as a Latin American
economic crisis are harbingers of more turbulent times. (iii) Finally,
there is cover-up at the level of state intervention both economically
and militarily. Economically the Anglo-Saxon states are preparing the
ground for a new phase of capital accumulation both at 'home' and around
the five Central Asian Republics. The proposed freezing of the minimum
wage by the Chamber of Commerce (Britain), the raiding of the Social
Fund (USA), the postponement of attempts to give 'Latin' labourers a
semi-legal status within US borders and a curtailment of the social
wage are pointers towards this manoeuvre. The AFL-CIO in the United
States and the TUC in Britain have already given the bourgeoisie a green
light for its plans. Militarily, the US/British axis would dearly love
to maintain a permanent garrison in both Afghanistan and the Central
Asian Republics (The 5-Stans, as they are called, are already members
of NATO's Partnership for Peace Programme). The Pentagon strategists
have estimated that, as things stand, they would need a 72-hour response
time for dealing with a coup in Saudi Arabia. Moreover, it is hoped
that a degree of 'military Keynesianism' (e.g., Son of Star Wars, etc.)
will stimulate the technological sector as a prelude to capital accumulation
on a higher plane.

Biological determinism has
not lost its utility for the bourgeoisie but for the time being at least
it has taken the back seat to cultural determinism as the preferred
mode of oppression. Historically in Britain there have existed three
main varieties of nationalism: the first is associated with 'old money',
the Royal Family, the 'aristocracy' and the House of Lords; the second
has roots in the Tory Party which until recently was buttressed by finance
capital; and the third form of nationalism is founded on Labourism and
industrial capital. Since these three forms of nationalism have been
losing ground in recently years without a new manifestation of nationalism
(or European supra-nationalism) replacing it, a vacuum has evolved.
Opportunistic fascist and neo-fascist groupings have filled this vacuum
and recruited from all three segments of disillusioned nationalists.
Hence, the British National Party can justifiably claim support from
big farmers, old aristocrats, ex-industrial workers, skilled workers
and anti-European ex-Tory financiers.

In Britain, the traditional
left (Leninists, Syndicalists, Anarchists, and even Autonomist Marxists)
have, by and large, given up on the industrial wing of the proletariat.
This has surely played into the hands of the neo-fascists who can position
themselves as the representatives of the 'white working class'. In this
context, the fascist inspired 'Rights for Whites' campaign chimed with
a certain sense of alienation that was not permitted a radical expression
by the state and media.

In winning back this important
section of the proletariat, revolutionaries should pursue a strategy
with the following aims: (i) to re-establish contact with those sections
of the industrial working class demoralised by experience of defeat
at the hands of successive Tory and Labour governments; (ii) to link
these 'molar antagonisms' (workplace struggles at the point of production)
with 'molecular proliferations' (osmosis of isolated instances of struggle
into the 'outside' world).

Lastly, we need to understand
more concretely not only the reasons why some proletarians succumb to
racist views, but just as significantly the reasons so many of them
resist the daily barrage of media manipulation. This approach will
allow us to focus on our strengths as well as our weaknesses.

The gradual shift toward 'neo-liberal'
policies, the concomitant drive in favour of extending 'civil society',
and the irrelevance of containing the USSR behind a 'green line' has
made so called 'political' Islam redundant. This is clearly observed
in the most 'advanced' areas of the Middle East (e.g. Iran, Turkey,
Syria, Algeria, Azerbaijan and Egypt). This is not to say 'political'
Islam will vanish soon but it does underscore that perhaps it is past
its zenith. These societies have been tentatively experimenting with
modern versions of 'protestant Islam' and 'secularism' as alternative
mechanisms of accumulation and recuperation.

The September 11 massacre will
catalyse anti-religious sentiments amongst vast sections of the region's
proletariat, whilst simultaneously undermining bourgeois ideologies
such as 'anti-Americanism' and mindless 'anti-imperialism'. It is true
that in the short term a counter-tendency to this may develop in Afghanistan,
Iraq, Pakistan, Saudi Arabia and certain parts of Palestine. But overall,
'political Islam' has passed its apex. The Iranian/Turkish proletariat
lead this atheistic struggle against religiosity. In Syria the Muslim
Brotherhood has been forced to draw closer to the Syrian Communist Party
because its social base has shrunk. Likewise, Hamas first accepted a
subordinate role to the Palestinian Authority and more recently it has
combined forces with the Leninist Popular Front for the Liberation of
Palestine because it felt itself marginalized (Editors' note: oops!
Sorry, we got that wrong!). This paradigm shift will bring with it a
number of opportunities for us as well as 'eastern' revolutionaries.
It is imperative that we use our relatively substantial resources in
London and other 'western' cities to co-ordinate communications amongst
radical elements. Particular attention should be focused on proletarian
feminist groups, as they seem to be leading the struggle against oppression
in many parts of the Middle East.

The opposition to the war is
growing worldwide and although not all groupings oppose the war for
revolutionary reasons, we should be pleased with our contribution so
far. And though the Anglo-Saxon bourgeoisie is trying very hard to prepare
public opinion for an intensification of the war in Iraq, it is difficult
to see how they could succeed. As the Borg collective prepare to assimilate
everyone into a US hive in order to raise productivity and Species 8472
plans to purge our universe of all 'impurity', it becomes even more
imperative to raise the slogan: No War But The Class War 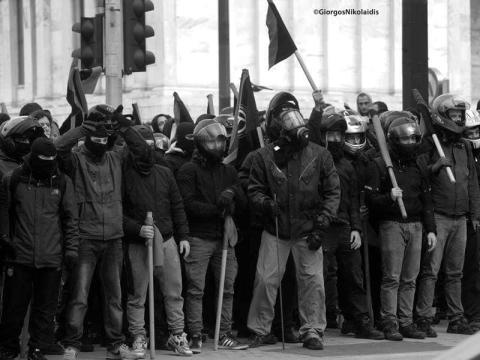 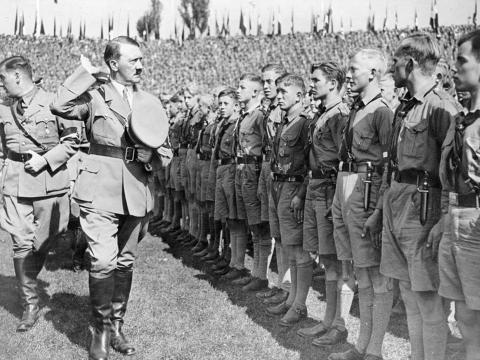 A summary of an exemplary work of Marxist scholarship. (More such summaries here.)
Image 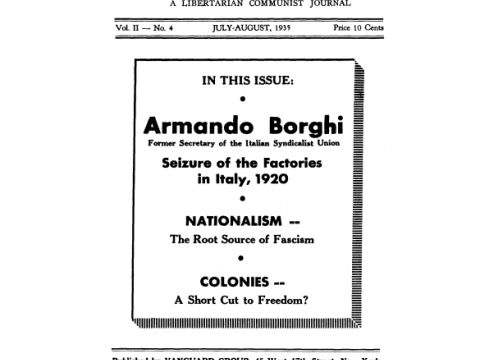 The July-August 1935 issue of Vanguard, an anarchist journal published out of New York, with articles by Armando Borghi, Sidney Solomon and Sam…
Image 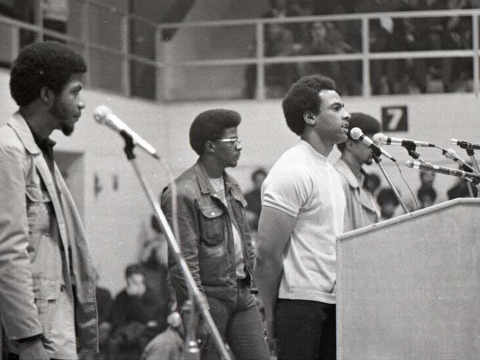