KATE VANDEGRIFT AND JUNE JUDSON spent a year running a one-night-a-week improvised drama class in what was ironically called the Quiet Room of a youth club in North London. This issue of ANARCHY is a blow-by-blow account of their experiences. The most that they are able to claim for their experiment is that "over the course of the months, working under conditions more akin to a street corner than a school room, a very mixed bag of sensitivities learned to co-operate (if only sporadically) in the creation of highly personal and original interpretations of their private world".

Quite apart from its human interest, and the author's close observation of, and intense sympathy with the participants, this story is valuable on several levels.

Obviously it is useful for people involved in similar or analogous activity. How best should one attempt to utilise or cope with this situation, or that one, when it arises? What alternatives are there? Which ones should be avoided? In a situation which was what the layman would call anarchic, the kind of approach which we would call anarchic was applied. Did it succeed? Well, the reader will conclude from Kate Vandegrift's narrative that one way to guarantee failure in such a situation is in the invocation, in one form or another, of external authority.

Anyone to whom "drama" simply means putting on a play will be fascinated by the resourcefulness which the two drama teachers brought to their experiment, and will be excited by the potentialities of this approach in other fields.

Anarchists who, by definition, want to replace authority by voluntary co-operation in every sphere of life, have a particular concern with what we might call the dynamics of disruption. It is a concern with two aspects, for the anarchists are themselves a disruptive element in authoritarian institutions, while at the same time they are concerned by the vulnerability to disruption of libertarian institutions. Why has X an irresistible urge to break up a series of meetings, why must Y use so much effort to wreck a self-governing workshop project, why can Z only co-operate if he is permitted to dominate the scene and to manipulate the others?

This faithful report on what went on in the Quiet Room last year may help us understand the personality factors involved in any co-operative group activity. 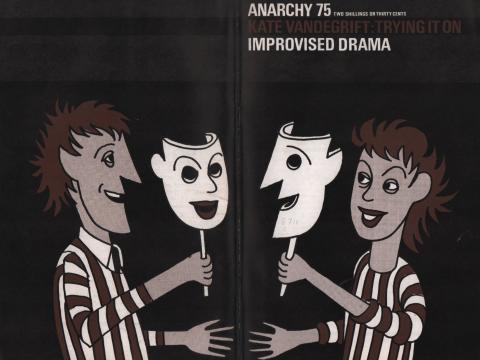 Issue of Anarchy Magazine from May 1967

Trying it on: An experiment in anarchy

The views expressed in this article are those of the author and not necessarily those of the ILEA or any of its officers.