Reflected in a Puddle...

WHEN I FIRST CAME TO WORK BEHIND THAT WINDOW, there was only an asphalt passage with a brick wall running along the other side; a nice mellow brick wall, with a gate set in it, through which the primary school children poured four times a day, twice in and twice out. They ranged very widely, those children, in the matter of size and shape and general approach to life. You could see it all just by looking through the window, especially when they were coming out of school in the afternoon, because then they were at their most exuberant and uninhibited — or anyway less inhibited by accompanying parents and the long day ahead of them.

One day in Spring, the asphalt was cut away by a gang of Council workers, leaving a tiny tree planted in the dusty soil beneath. It was quite a small round hole and the tree, which looked just like a bare stick, was supported by another stick. I can't remember how long it took them to put up the ugly circular wire guard, but after that the tree got no peace! It was like asking for trouble.

The children kicked the guard, they pulled it, they climbed up it, they stuffed things down inside it and poked through it to get them out again. No matter what the weather was doing, there was always an opportunity for some of the children to vent their spite on the Council's little effort to beautify the passage. If they had not put up the guard I think the tree might have survived. Its defencelessness could have brought out the corresponding desire to protect, and anyway it would have looked more potentially beautiful.

The children's imagination might possibly have seen the passage coolly shaded by spreading green branches and they might, perhaps have been seen standing around the hole in awed discussion. Better still if they had planted the tree themselves, or if the Borough Engineer had enlisted their help. Can you imagine what elaborate precautions might have been made to see the fulfilment of such a responsibility? But the ways of the adult world are to blunder on, reducing their graceful gesture to an insult, and their children to hooligans.

So although the tree did throw out some green shoots and look quite hopeful for a while, it was foredoomed. And long after it had withered away, the guard remained, determinedly surviving its purpose, which it had so lamentably failed to fulfil, stuffed like a rubbish basket with bottles, tins and papers. A council which had thought of a tree

CATHERINE GIBSON was born in Tasmania and lived in New Guinea before becoming a technical librarian in London.

to beautify that spot, did not think of removing its pathetic wreckage.

Well they did remove it eventually, I think a year later, having given up hope of the tree at last. So the round hole in the asphalt was left to collect the rain and that is how the puddle came to be there. It proved to be more attractive to the children than the wire guard, and open to an even wider variety of attentions.
The small round hole was soon filled with water, and the dust became mud. There seemed only a few days in the year when there was no water and no mud, and only then was the hole ignored. It seemed to be an oasis of "unmake" in the finished, buttoned-up environment. Its influence was out of all proportion to its size. I am often impressed with the thought of how little things really are so much more important than the rather stereotyped plans we make for our lives — and the lives of others.

Here was a little mud and water, elemental and real, and the children shed their carefully instilled sense of the fitness of things, by coming out of school and stamping through it, or pushing each other into it, or stirring it about with a stick. One of the best things they have found to do, is to put a foot into the puddle so as to get it well saturated and then make muddy foot-marks as far as possible along the dry asphalt. Another good thing to do is to stamp on the surface of the water so that everyone around gets splashed. This always raises a great outcry, especially if adults are around, and many a child gets dragged home amid general recriminations.

Then there are the small children who fall into it because they are not looking where they are going. They too usually have parental scoldings added to their discomfort, and are surprised, I'm sure, to find how difficult life can be.

Some children are not interested. They go about their business solemnly, perhaps because they are in charge of smaller children, or because they have ceased to see their surroundings. Perhaps puddles to them are just one more thing to be avoided in life. You can't after all, expect children to keep their freedom for long with so many things to harass them. Its surprising how quickly they come to learn to adapt themselves to life. I've watched a child's face change from wondering anticipation to apprehension in a few months. It would be a long journey back to wholeness for that child — and this because some adults were themselves incomplete, and in their own fear, planted inadequacies in virgin soil to prove something to themselves. To reflect yourself in someone else, if possible permanently, is a great comfort. For all their talk of children needing security, it seems that it is adult security which has to be bolstered up by bullying and moulding children; adult reality that must express itself in reassuring repetition of unrealities.

So the joyless ones, the disenchanted, look askance at the ones who still like to squelch and spatter. When it rained the drops danced very merrily in the puddle, and when it snowed, the puddle was obliterated in the uniform whiteness, and even the dullest child is not proof against such temptation to every sense — and some could even discover a midget skating rink beneath the powdery surface of the puddle.
In the summer when everything was hot and dry, the school was closed and the gate shut. Two little boys came back to the puddle just to be sure it was still there, and scattered the dust with their cricket bats. And then this autumn the Council men came to resurface the passage. The children were enchanted with the smell of hot bitumen and in the expertise of the asphalters. But the puddle is gone, and their heels drum along the new black surface unchallenged and undistracted by the glimpse of another world beneath. 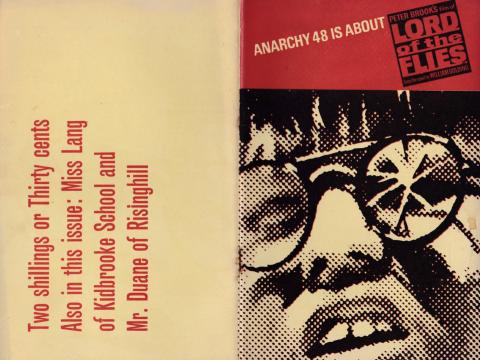 Issue of Anarchy magazine from February 1965, this issue is focussed on the works of William Golding and the particular the Lord of the Flies in particular.