A Response To A Critique Of “Direct Unionism”

This is a response to FW Sean Gallagher’s letter that appeared on page 8 of the October Industrial Worker.

FW Gallager goes on to say, “The reason for eschewing contracts in our early period emanated from historical circumstances which have not survived to the present day.” I agree with him here: the circumstances have changed; they’ve gotten more pronounced! Before the implementation of the social-democratic labor relations regime, contracts were more likely to be based on raw class power in the workplace. The contract was a way to prevent disruption in the workplace. Under the NLRB, unions often eschew actual workplace conflict and seek to just have a “fair” election—which was the entire goal of the NLRB in the first place!

FW Gallagher then addresses the early IWW’s transient workers, claiming their fate to “rarely [toil] consistently under one company or farmer...negated the role contracts could play.” Besides the fact that we did have a lot of settled industrial workers in the early days, it’s important to recognize that many of the workers we’re currently organizing are basically locally transient, working in high turnover industries like food and service. This is one reason why the seminal IWW principle of “organize the worker, not the job” still makes so much sense today.

In large parts circumventing the existing union structures, this strategy led to a dramatic increase in militancy and workplace conflict.

FW Gallagher’s letter claims “some of the most militant labor struggles” were “centered on the fight for union recognition.” Trade unions always propagate the belief that the interests of the union and the workers are one in the same. Yet, one needs only to read Martin Glaberman’s “Punching Out” to understand how the institutionalization of the United Auto Workers de-escalated struggle and alienated workers—regardless of whether autoworkers, like Glaberman, thought recognition was a good idea at the time.

Finally, I found this statement both confusing and unsubstantiated: “Under [‘Direct Unionism’], the IWW would be... unprepared for an unexpected struggle like Wisconsin.” How would contracts have benefited the IWW in Wisconsin? If anything, the Wisconsin state government’s actions in negating long-standing contracts demonstrate the folly of relying on contractualism and our supposed “federally recognized right to organize.” 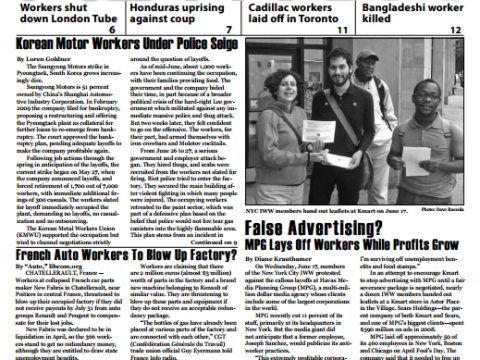 Tom Levy shares his thoughts on the Employee Free Choice Act, a proposed bill (since killed)that would have made it easier for U.S. workers to unionize under labor law.