Transport the Scope for Citizen Action

ONE OF THE OBJECTIONS RAISED TO THE POINT OF VIEW of anarchists and other decentralists is that they ignore the complexities of planning for the social needs of densely-populated urban societies like our own. Yet what stands out from a consideration of the transport muddle is that there is no plan: there are instead a variety of official bodies, uncoordinated, working in isolation and often in secrecy, producing muddle, confusion and waste on an enormous scale.

Ministries, nationalised industries, local authorities large and small are working away with long-term and short-term plans, and putting schemes into operation at enormous costs which turn out to have been obsolete before they left the drawing board. To rub the point home, let us itemise just half-a-dozen current examples from the press:
1. When British European Airways makes a loss on its services, the government decides that the services are to be kept going and the empty seats filled by reducing the fares. When British Railways makes a loss on its services, trains with empty seats are discontinued, and fares on those remaining are increased.
2. Among the stations closed on September 6th this year was Castlethorpe, Bucks, on the main Euston-Crewe line, where villagers sat down in front of the last train in protest. More than £45,000 had recently been spent on modernising their station.
3. At Stranraer in the west of Scotland, where the government is subsidising new industrial enterprise, British Railways recently put into service a new 3,500 ton ship, specially designed for the Stranraer-Larne ferry. But in Dr. Beeching’s plan, Stranraer will not only lose all its special express boat trains from London, Newcastle and Glasgow, but it will actually become almost 60 miles distant from the nearest passenger-carrying station.
4. The London Traffic Management Unit of the Ministry of Transport is attempting to alleviate traffic problems in London by introducing large-scale one-way traffic systems. Simultaneously the London County Council is trying to do the same thing by large-scale roundabouts, like those in the Red Lion Square and St. Giles Circus areas. The two methods contradict and cancel out each other.
5. Battersea Council has had to abandon a major part of its housing programme, because of proposals for a six-lane motorway which no-one had told the Council about and of which it had never heard until planning permission for one of its housing schemes was refused.
6. Doctor Beeching is proposing to close the railway between Newcastle and Washington in County Durham at the very moment when a New Town is to be built there.

What is the remedy for absurdities of this kind? The Labour Party (which can hardly blame “the jungle of private enterprise” since it is public bodies which are involved in each of these instances) proposes yet another government department to co-ordinate the activities of all these bodies, and produce what we so conspicuously lack: a plan for transport. In terms of practical politics and procedure, the trouble with this kind of “overlord” body is that in practice it is never given the power it seeks—and is never strong enough to overrule sectional interests—this is the experience of “democratic” countries like Britain and the USA as much as that of “dictatorships” like Nazi Germany and Stalin’s Russia.

One aspect of a Citizens’ Plan for Transport, is that suggested by Robert Swann in his article “Direct Action and the Urban Environment” in ANARCHY 41: a campaign to “defend the city against erosion by automobile”. Swann envisages citizen action of the civil disobedience kind as the teeth of such a campaign. In this country Professor Buchanan himself recommended the same kind of thing last June, in his “Don’t let traffic ruin your communities” speech.

Another approach, in rural areas, is that of citizen self-help. We have all discovered, while on holiday in isolated places, that what appears to be a district without a transportation system, has in fact a network of one-man operators or voluntary bus services, which in a variety of ingenious ways adjust their operations to suit the passengers’ convenience, or combine the bus with goods deliveries. (There is even a government pamphlet explaining the way to go about running such a service—Village Bus, HMSO, 1956).

Again, we all know of abandoned railways which have been taken over by groups of enthusiasts and have achieved some financial stability. The Bluebell Line in Sussex is a famous example. Another is the Middleton line at Leeds which makes a profit on the freight it carries under the direction of Dr. R. F. Youell of Leeds University. These amateur adventures may simply be the real-life version of those old Ealing Studios Comedies, but they embody several important social truths—which a leisured society should not ignore. (See Ian Nairn’s article “Do it Yourself” in ANARCHY 23). In a society in which the distinctions between work and play diminish, many socially useful but “uneconomic” activities can be moved from one sphere to another. And surely what can be done on a small scale by a bunch of amateurs can be done on a grand scale by professional transport workers. We want the disgruntled transport users and the disgruntled transport workers to join forces to this end.

One citizens’ initiative set off by the Beeching Report is embodied in the pamphlet Hampstead and the Broad Street Line, published by the Save the Broad Street Line Committee, 62 Upper Park Road, London NW3. (3s. by post). Dr. Beeching proposed to close the Broad Street to Richmond Line to passengers, even though it carries 18,000 of them a day, on the grounds that the service loses money. A public meeting was held to protest about the proposed closure, and it set up a committee which has produced a report that not only demolishes Dr. Beeching’s calculations, but investigates in detail who actually uses the line and what the cost of alternative means of transport would be. The social cost analysis set out in this report indicates that the actual cost to the community as a whole of closing the line would be £578,000 a year, as opposed to the claim by Dr. Beeching that British Railways lose £69,000 a year on running the passenger service. The detail and impeccable statistical analysis which this group of citizens has assembled will certainly make it considerably more difficult to close the line.

Similar citizens’ groups have been formed to “implement” the Buchanan report—in the sense of applying Buchanan’s approach to local problems. This is an uphill task, as this letter from Mr. Robert Timms demonstrates:

“I am a member of Bromley Design Group, a voluntary group of architects, surveyors, art teachers and like-minded people. We disagree with our local council’s 32-year-old plan, just about to reach fruition, for widening the bottleneck High Street shopping centre to speed the flow of traffic through the town. We prepared a study of the town centre, complete with a scale model of an alternative scheme, maps and sketches. Our alternative to the present plan of widening the shopping street, with offshoot traffic diversions down residential roads, was to turn the “bottleneck” into a pedestrian precinct, opened on one side to a public garden at present accessible only by a path between the public lavatory and the library fire escape. In mid-April we exhibited our scheme, complete with a perfectly feasible and comparatively inexpensive ring road. After an interval for digestion, the local Chamber of Commerce publicly applauded it as superior to the council scheme. The council has yet to reply to the Chamber of Commerce request for consideration of the study. Buchanan remains where he was—off the ground on a pedestal out of reach.”

What Mr. Timms calls the “insurmountable obstacle of local authority philistinism” and its equivalent in other public authorities are likely to be the brick wall that most citizen action groups will find themselves up against. What they can do about it. Well, the only alternatives are to give up, or to increase the pressure. A handful of really determined people who don’t intend to give up, can achieve what otherwise seems impossible.

An example of this comes from another field of transport, the canal system. In sharp contrast with other countries where large-scale construction of canals is being undertaken today, canal-building in this country, apart from the Manchester Ship Canal, ceased in 1850. Canals are by far the cheapest, safest and quietest means of regular heavy freight traffic. (Even our neglected canals in this country carry over 4,000,000 tons of coal, 2,500,000 tons of petroleum products and more than 3,000,000 tons of general merchandise annually. Mr. Marples, needless to say, would like to. fill them up and forget about them. But other people, notably the redoubtable Robert Aickman, of the Inland Waterways Association, think differently, and the example we have in mind is the Stratford Canal restored to use thanks to a Midlands architect, David Hutchings.

The British Transport Commission proposed to close this canal at an estimated cost of £125,000. After a campaign of protest in 1958, the National Trust took it over, and employed Mr. Hutchings to bring it back into use, after 30 years of total neglect, for £50,000. Mr. Hutchings says, “When I was an architect in Coventry I got involved in preserving canals and so on. And when this came up the National Trust asked me to do it. We had no plans, no tools, no men, no money, no anything. Ever since, it’s been a job of getting contacts, persuading them to help, scrounging equipment, making people give things they didn’t want to give, volunteer when they didn’t want to, and work far harder than they wanted to for much longer than they wanted.”

Mr. Hutchings talked his way into getting the army, prisoners from Birmingham prison, and hundreds of volunteers to work on the canal. It took three years and involved dredging half a million tons of mud, rebuilding 30 locks, replacing 70 lock gates each weighing over four tons, and virtually re-digging more than half the canal bank. The 13 miles canal was reopened this year, and, inspired by this success, the National Trust is thinking of restoring another 16-mile canal. If this kind of forceful energy, which never takes no for an answer were applied to citizen intervention in other aspects of the transport system. who knows what might not be achieved. As Colin Buchanan says, “It is not a traffic problem we are faced with, as much as a social situation.” 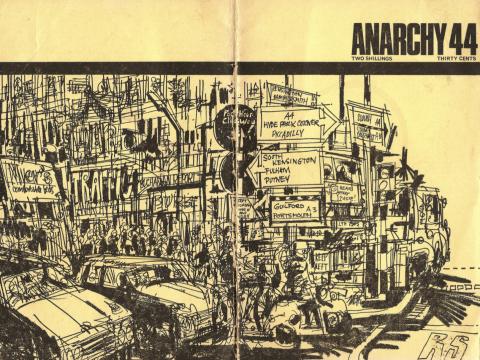 Issue of Anarchy magazine from October 1964, the articles in this issue are mostly about transportation and urban planning.
Image

British Airways has sacked a second worker for taking part in the wildcat strike which paralysed the airline's Heathrow operations last summer.