This weeks pick is a telling documentary which presents reels of amateur video footage shot in Europe in the 1930's which innocently and unknowingly charts the rise of anti-Semitism and Nazism.

Other selections continue to tell the stories of the evolution of the car bomb, of Saddam Hussein's household history and indeed of evolution itself. Mooted prostitution reform laws and press freedom or otherwise at the coming Olympics in China form some of the other topics for discussion and investigation.

Sunday 3 August - 10 - 11.05pm - Channel 4 - The WI Guide to Brothels
Journalist Nicky Taylor is among the ranks of those who seek to introduce vital reforms to prostitution laws in order to provide some form of protection to sex workers. Here she finds unlikely bedfellows in the Hampshire Womens Institute, two members of whom accompany her on trips to the US, New Zealand and Holland to look at what lessons can be learnt from how other countries manage this vital area of law and welfare.

Monday 4 August - 8 - 9pm - Channel 4 - The Genius of Charles Darwin - 1/3
Charles Darwin's discovery of how life evolves has been considered by many to be the most important idea ever to be had by a human mind. Such were its shocking implications for Victorian society at that time, Darwin sat on it for almost 20 years. Richard Dawkins presents this three part series on the man and his work and in this first episode attempts to persuade a class of cynical teenagers on the importance and implications of this discovery.

Monday 4 August - 8.30 - 9pm - BBC1 - Panorama - China's Olympic Promise
John Sweeney is an appropriate man for this episode's job of attempting to ascertain if the Chinese governments pledge to provide press freedom to foreign journalists is being honoured.

Tuesday 5 August - 10pm - 12.05am - More4 - The Thin Blue Line
Dallas policeman Robert Wood was shot dead in 1976. 16-year-old David Harris was later arrested after having boasted about carrying out this murder; however he blamed it instead on Randall Adams, a hitch-hiker who happened to be in the area at the time. Adams was tried and sentenced to the death penalty, this was later commuted to life imprisonment on the basis of a technicality. Film-maker Errol Morris made this film twelve years after, sensing a miscarriage of justice. Nicknamed "the detective director", having once been employed as a private eye, Morris' film, deemed to be one of the best and most influential documentaries ever made, resulted in a retrial.

Wednesday 6 August - 9 - 10pm - BBC2 - House of Saddam - 2/4
This week, Saddam defiantly marches his country into "the mother of all battles" in 1991 as a result of fears that an upsurge in Kuwaiti oil output will threaten Iraq's prosperity. Concomitantly, his decision to take a second wife and the appalling behaviour of his eldest son Uday, add to further fractures in the already volatile household.

Pick of the Week :rb:
Wednesday 6 August - 9 - 10pm - BBC4 - The Thirties in Colour - 4/4 - End of an Era
In the twenties and thirties, only the very rich were able to afford to videotape events in their lives and the wider world - and were able to travel in the first place in order to record these events. Perhaps therefore it is inevitable that amateur recordings made from this era reflect the perceptions of their makers so markedly. Interesting enough in itself, these recordings have an added poignancy in this final instalment. Captured innocently and inadvertently, here are illustrated growing anti-Semitic sentiments, and the "banality of evil" in Nazi Germany, even among Hitler's inner circle. Late 30's sightseeing trips to Europe assume an appalling and unintentional significance. This documentary has been chosen as Pick of the Week for so astutely conveying so simply what learned historians have struggled to do. 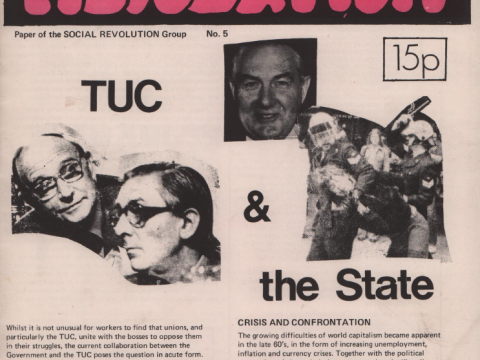 Issue 5 of Social Revolution circa 1976. Articles on: TUC and the state, the woman question and socialism, report on schools (occupations etc),… 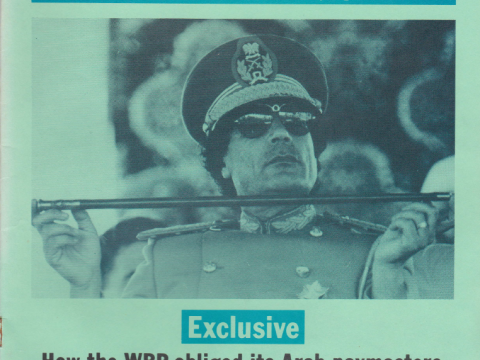 16th issue of the 1980s London Solidarity Journal, including an expose on the Workers Revolutionary Party. PDF courtesy of Sparrows Nest Archive,…

A working paper for an assembly of The Commune examining communist potential within the crisis and challenges for revolutionaries.