The world of Paul Goodman

Introduction to issue 11 of Anarchy.

We quote these remarks from Mr Cannon's review of the new edition of Eltzbacher's Anarchism in the students' journal of the London School of Economics, because they express something very close to our own point of view and because the kind of restatement of anarchism which he calls for is what we conceive to be the function of ANARCHY. The American journalist Dwight Macdonald, in a much-quoted footnote ("the best footnote I ever wrote") remarked a few years ago that

The revolutionary alternative to the status quo today is not collectivised property administered by a "workers' state", whatever that means, but some kind of anarchist decentralisation that will break up mass society into small communities where individuals can live together as variegated human beings instead of as impersonal units in the mass sum. The shallowness of the New Deal and the British Labour Party's post-war regime is shown by their failure to improve any of the important things in people's lives – their actual relationships on the job, the way they spend their leisure, their child-rearing, sex and art. It is mass living that vitiates all these today and the State that holds together the status quo. Marxism glorifies "the masses" and endorses the State. Anarchism leads back to the individual and the community, which is "impractical" but necessary – that is to say, it is revolutionary.

Another American anarchist writer who has been discussing these precise issues for years is Paul Goodman, and the fact that two of his books have become available in this country during the last year, and another is about to be published in America, provides an opportunity to discuss his contribution. Goodman, who was born in 1911, is a novelist, poet, playwright, critic and psychologist, who has written many books – over the last few years they have included Gestalt Therapy (Julian Press), The Structure of Literature (Univ. of Chicago), Our Visit to Niagara (Horizon), and The Empire City (Bobbs-Merrill).

But for most of us his name brings to mind the articles of great distinction which he has contributed to the minority, anarchist, or socialist magazines in America: in the years at the end of the war to Politics, Retort, Why?, Resistance and Alternative, and in the last few years his frequent contributions to Commentary, Dissent, and Liberation, of which he recently became an associate editor.

Some of the earlier group of articles, "On Treason Against Natural Societies", "A Touchstone for the Libertarian Programme" and "Revolution, Sociolatry and War" were gathered together in his book Art and Social Nature (Vinca Press, 1946) and some of the recent ones form chapters of his recent book Growing Up Absurd and his new one Utopian Essays, which are reviewed in this issue of ANARCHY together with the most important of all his books, written in collaboration with his architect brother Percival Goodman, Communitas: Means of Livelihood and Ways of Life. You will see that he is a wideranging writer, and in ignoring his novels and poems and literary criticism, we are presenting only a part of the world of Paul Goodman. He says himself that

I have been severely criticized as an ignorant man who spreads himself thin on a wide variety of subjects, on sociology and psychology, urbanism and technology, education, literature, esthetics and ethics. It is true that I don't know much, but it is false that I write about many subjects. I have only one, the human beings I know in their man-made scene. I do not observe that people are in fact subdivided in ways to be conveniently treated by the "wide variety" of separate disciplines. If you talk separately about their group behaviour or their individual behaviour, their environment or characters, their practicability or their sensibility, you lose what you are talking about. What I see, rather, is community and community thwarted, culture and barbarism, ideal striving and anxious resignation; and all of this in conflict and motion.

Like many people whose horizons are very wide indeed, Goodman is firmly rooted in time and place. The place is his native New York, for which he is said to have attempted to do in his long novel The Empire City, what Joyce did for Dublin. Thus it is second nature for the Goodman brothers to conclude their far-ranging Communitas with a development plan for the New York riverside, and for Paul Goodman to return continually in Growing Up Absurd to the housing, education or delinquency problems of his city, and to include in his Utopian Essays a plan for eliminating motorcars from Manhattan. The time is now and this "utopian" thinker remarks that "I seem to be able to write only practically, inventing expedients … My way of writing a book of social theory has been to invent community plans. My psychology is a criticism. A discussion of human nature is a programme or pedagogical manual of therapeutic exercises. A literary study is a book of practical and political reforms." He treats his subjects as ongoing into the immediate future, requiring to be coped with. His expedients are simple, day to day direct action, and this is one of the things which makes his approach of the greatest interest to those who, by way of the radical wing of the anti-bomb campaign in this country, are looking for the wider applications of the philosophy which is gradually emerging from their activities and experiences. 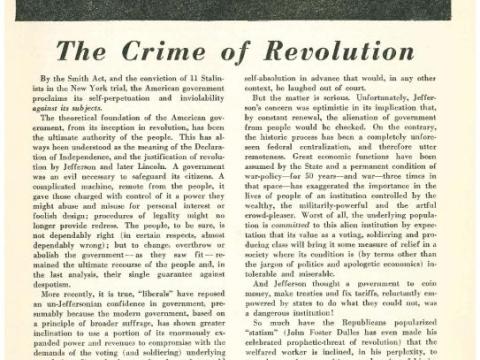 The Vol. 8, No. 3 (December 1949) of Resistance, an anarchist publication produced out of New York. 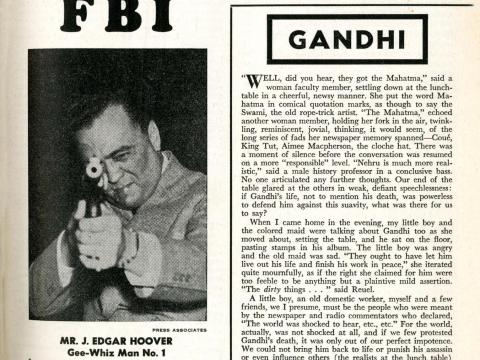 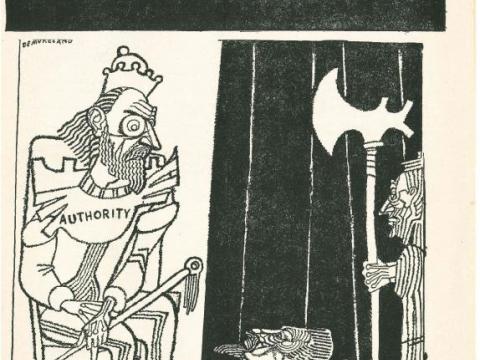 The Vol. 6, No. 9 (March-April 1948) of Resistance, an anarchist publication produced out of New York.