For Democracy and Discipline: A Plea to Occupy Melbourne

A Plea to Occupy Melbourne in the days following the cowardly attack of the Victoria Police upon our fair encampment at the order of the princeling, Robert Doyle"

The end of Occupy Melbourne

On the morning of the 21st of October, about 400 peaceful police[1], some mounted on peace ponies, others wielding peace spray, swooped down on City Square which had then been host to the camp of Occupy Melbourne since the 15th. The Lord Mayor Robert Doyle had announced earlier in the week that “it was time to move on.” This is an article on the eviction of the occupation. In it, I try to show how certain assumptions and ways of action, crystalised in the chants we raised on the day of eviction, defined and limited what the occupation was. Throughout the week, a clique of liberal-pacifist activists attempted to impose these ideas upon the entire assembly, and to take control of the general assembly. In the wake of the eviction, their coup over the assembly has come to pass, leaving us in circumstances that demand reflection, re-organisation, and preparation before future action can be carried out with confidence.

“This is a peaceful protest!”

Leading up to, and on the day of, the eviction, the constant refrain of “peaceful protest” only hampered attempts at a serious discussion of tactics. A discussion of tactics is not necessarily the endorsement of violence. It is an attempt to enable collective responses to the questions of how to respond to police violence, how to protect ourselves, and what is the best way to resist authority. I have seen the ideology of nonviolence used to end discussions on civil disobedience (which is somehow always “violent,” even though the greatest figures of nonviolence were practicing civil disobedience), and to discourage a pro-active reaction to the police (building barricades, or defending them, being categorised as “violent”). Moreover, it is unfair to credit the media victory on Friday to an ideology which I doubt is held by a strong majority of protestors; nonviolence is simply not accepted completely enough to explain a causal link. What we instead saw was a case of discipline: as a movement, we made a disciplined decision not to riot, in spite of vile attempts by the police to provoke us. Discipline must feature in our discourse from this stage on as being neither obedience, for discipline is actually worked out by a thousand instantaneous acts of consensus in the field, and grows out of a shared culture; nor ideological reductionism, for discipline is not afraid to examine alternative strategies, trusting in its own maturity to choose the appropriate tools of struggle. When I see a protestor talking another one out of attacking the police, I do not see the triumph of nonviolent ideology. I see the triumph of a disciplined resistance culture.

“Move forward slowly!”
-The chant we used as the cops charged us in the rear

The eviction went through three phases. First, there was a period of police investment[2] which lasted approximately three hours; second, there was a half-hour of assault; third, there was a slow retreat through the city, going up Swanston street in response to a series of charges by police, during which many were arrested, finally concluding at Trades Hall. Between the second and third phases there was the greatest danger of a riot, but also the greatest opportunity was lost. Two thousand people had come out in support of our movement: the moment was ripe for a mass experiment in democracy. But at that stage, due to a lack of prior planning for police violence, the movement was unable to act decisively. In the following hours of the slow retreat, the human microphone proved useless for creative decision-making, in fact quelching the independence of groups moving to seize nearby intersections as a defense against a second police kettle, and “had the effect of enforcing opinions as fact through repetition” as in Los Angeles.[3] Eventually the process became dominated by those who could speak loudest (the ones with actual microphones). The collapse of radical democracy was evident not only in the inability of the crowd to act in response to the police without hierarchical leadership, and the heavily stage-managed general assembly at Trades Hall at 6:00, which took place with a heavy police guard waiting outside (as though to insinuate that they, too, could block certain motions).

Throughout the survival of the camp, and all through the eviction process, protestors took up the slogan of “the 99%.” Analysis of the movement’s political strength generally came down to what proportion of this statistic we represented. But as Hardt and Negri have recently argued, in line with their general argument of Empire-Multitude-Commonwealth, the demand for democracy made by the movement is symptomatic of “the lack – or failure – of political representation.”[4] At its best, the slogan “99%” represented an awakening class consciousness (thus the uselessness of the doctrine of “the 100%”, of unity with the police and a reified image of “humanity”; this language is the end of politics proper, not its transcendence). At its worst, it represented a vulgar materialist appeal to democratic legitimacy, as though there were something worth saving in the corpse of bourgeois representative democracy. We are, quite simply, the 0%: those who are precisely un-represented in the political sphere, and who thus choose to represent themselves. When we choose move from schemas of representation to politics proper, we leave behind any idea that this is an act of protest.

“We are Occupy Melbourne!”

Beneath the outward signs of our unity, fissures are opening in the Occupy movement. Those who initially convened the protest still seek to maintain ownership over the process. Consensus-based decision-making has been perverted into a bureaucratic means of silencing minority opinion (always, always in the interests of the group: there’s not enough time, the group has already reached a decision, or that’s not what “we” are about, etc.). A few slogans are promoted to the point of being beyond any questioning; the assumption that they are common ground labels all criticism of them as disruptive. But as I have sought to demonstrate in those article, those slogans actually act as limits imposed on the movement by those who wish to control its potential. We must break out of the “consensus” that dictates that we are engaging in an act of civil protest within the coordinates of liberal democracy. Rather, Occupy Melbourne, and the global movement of which it is a part, are part of a process to come up with new models of social organisation beyond the limits of our current political system. The only word I can think of for such a process is revolution.

At this stage, it is vital that we learn from the lessons of our first occupation. Several issues present themselves immediately:

1. The second occupation, at Flagstaff gardens, has been announced with what seems like undue haste. Remember, unlike the anti-globalisation movement, which reacted to WTO and G8 summits, we set the pace and the agenda. Perhaps it is already a political impossibility to call off the occupation, as it has the acclaim of a series of assemblies and has already been advertised, but activists would be wise not to expect different results from a repetition of the same strategy.

2. Every member of the occupation must be organised in a way that permits them to partake in political, strategic, and tactical decision-making. The most effective measure at this stage would be for individuals to form themselves into affinity groups: that is, groups of people who have the shared values, trust, and knowledge of one another to act collectively both in democratic forums and in conflicts with the police.

3. The entirety of the movement must begin a study of its tactics including safety, responses to police violence, and nonviolent resistance. Workshops can be organised on all of these subjects with little more resources than the energy of those who have past experience.

4. Tactics, of course, only become an issue in terms of an overall strategy. At the moment, the wisest strategy is not to seek conflict with the enemy, but to emphasise and build on the movement’s strengths. Protesting against police behaviour is probably more effective at this stage than occupying the park right now. The fact that Sydney was crushed, if anything, more brutally in a dawn raid on Sunday shows that media coverage alone won’t prevent further violence. Moreover, a lot of people were injured on the day, put in jail, lost property, lost days of work, and lost sleep over the occupation. The valiance of the leaders in sending people back to the front can only function by ignoring this reality.

5. The problems of democracy in the general assembly must be confronted and rectified. While in the moment of crisis after the eviction, the intervention of experienced leaders was probably necessary (though, again, this necessity could have been mitigated by prior discussion and planning, enforced through discipline), the general assembly has become markedly more centralised in a way that is unhealthy. A spokescouncil, comprising delegates from all participating organisations, affinity groups, and special interests (i.e. there should be queer, womens’, and indigenous delegates) is one alternative model which could rectify some of the problems of the assembly, but as with all of my suggestions it is meant merely to initiate debate on the challenges we face as a movement.

[2] I use the technical term from siege warfare, during which the attackers surround the defending castle and move their siege weapons into place: in this case, a cordon around the camp which prevented reinforcements from intervening in the assault. During this time, the police also cleared all protestors from Swanston street, outside the camp, which was later used as a dumping ground for those removed.

Marginality and Universality: The Indigenous Working Group and the 17th General Assembly of Occupy Melbourne

A critique written in the days following the 17th General Assembly. I apologise for the poor formatting, but I've been working on this all week and am thoroughly sick of it. I welcome your comments here or on my blog. 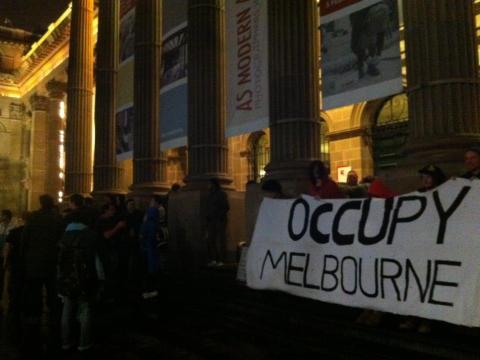 Leaflet handed out at Occupy Melbourne 2.0 on 29th October 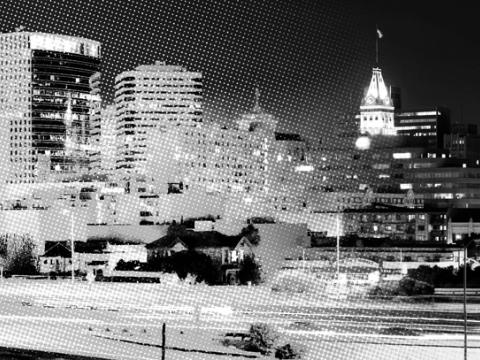 A letter to the #Occupy movement, from participants in Oakland, attempting to clarify and explain some of the questions around corporatism VS… 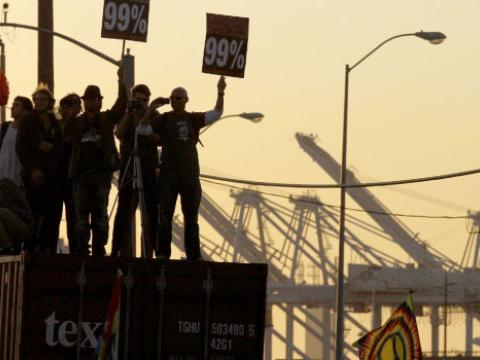 Occupy Oakland: The port shutdown and beyond - All eyes on Longview!

Jack Gerson discusses the lessons of the Occupy movement and it's future.