Education workers’ strike sabotaged by the union in Slovakia

Workers in education sector in Slovakia have started an indefinite strike on Monday 26th, 2012. However, the education workers' union put the strike on hold on Wednesday, because they entered negotiations with the government. There are no results yet and the demands have not been met.

Putting the strike on hold is nonsense as it discourages and demoralizes the striking workers. We would very much appreciate an international solidarity by sending an e-mail to the teachers’ union officials via the following online form as soon as possible. The text in the online form can be changed, so you can write it in a way you consider best. Spread this info as widely as possible. Some info on the strike in English can be found on the The Slovak Spectator website. Bt the moment only one school with an independent union remains in strike (a secondary school in Bratislava).

Yesterday we mentioned that only one school is in strike at the moment. As we found out, it the actual number of schools was two. One grammar school (GLS) and an art school in Bratislava. Today a general assembly of the workers took place at the premises of GLS. During the day representatives of 5 other schools from Bratislava arrived. Four of them confirmed that their schools would rejoin the strike on Friday, one of them even confirmed they would strike on Monday as well.

This process of self-organization and the courage of the workers is unprecedented in Slovakia. We wish we had more time to explain all the details, but unfortunately, time for us is limited.

On Friday 30 november the workers are organizing a protest in front of the Government Office and then march to the parliament. Several hundred education workers, students and parents are expected to come.

The officials of the mainstream union are negotiating at the moment. We will try to update as soon as we can.

It would be fine if protest e-mails were sent via the online form that was created: http://www.priamaakcia.sk/index.php?action=soliMailSchool&soliMail_id=32&lan=en

Hi, thanks for the updates, really interesting stuff!

more news later with photos, so far only that the number of workers and kids was 2000-3000 from Bratislava schools and astonished everyone! the mainstream union had 4000 workers from all over Slovakia at their gathering in Bratislava on Monday.

btw, the appeal to send protest emails is still actual.

After the Friday protest action where we have spread our leaflets again, workers and/or students from 17 schools met. Some agreed to continue in the strike, some quit (including the GLS school that rebelled as the first one on Thursday and was the initiator of the whole process; the reason is too much money lost for the strike days). The general agreement was that a form of "relay race strike" has been adopted and that means that next week at least one school will be on strike each day with several not teaching and only watching after the pupils. Some schools have already reported intimidation from the authorities.

There is no update about progress regarding the negotiations between the government and official education workers union except that the union says they will not accept 5%, but they neither stick with 10%.

The government says they will try to find money on the level of Self-Governing Regions. This comes after the union said no to the initial proposal that wages can be increased but rationalization is needed – meaning firing of several thousands of teachers (it is a part of the action plan and we learned last year that the liberal government had a plan to fire 5000 teachers; the new social democratic government seems to have tried to continue in this action plan).

The new union NŠO that was created as a split from the mainstream one is critized by some teachers because of the media outputs where the leader said things like they need masses and will recruit new members, so some are reluctant to see a hope in this new union which in fact is rather bigmouth and still haven't rejoined the strike for fear of legal consequences. At the moment, they debate what can be done and recommend their branches to debate about the possibility to rejoin. Some of the 17 schools have this union at school, some OZ PŠaV, some only a works council; some also fear legal consequences, some just said that the lawyers give contradictory statements and they will rejoin the strike anyway.

The self-organization and coordination of the 17 schools continues and they now have their own communication channels with questions what to do coming from some more schools not only from Bratislava.

IF YOU WANT TO SUPPORT THESE INITIATIVE:

What to do?
We ask you for actions in front of Slovak embassies/consulates and to send faxes/e-mails

When to do it?
Now or as soon as possible because the negotiations are underway and can be concluded on any day with unsatisfactory results.

ALSO
3. send a protest e-mail to OZ PŠaV officials via our online e-mail form http://www.priamaakcia.sk/index.php?action=soliMailSchool&soliMail_id=32&lan=en
4. send a solidarity message to our e-mail so we can translate and spread it to the striking workers

You can you use this model letter, but it is OK if you change it. If you decide to pay a visit to the embassy, then please make photos in front of the embassy which we can publish.

We would welcome if you could print out pickets.

Name of the organization
City
Country

We know there is an ongoing strike in the education sector in Slovakia. We follow the government’s hesitation to accept the demands of the striking workers, including a pay rise of 10%, with deep resentment.

We demand an immediate acceptance of the education workers‘ demands. We demand that the authorities stop pressuring those schools which expressed the willingness to strike.

We will inform the public in this country about the attitude of Slovak authorities towards the education employees.

Contacts – Slovak embassies in your countries:
Can be found on http://www.foreign.gov.sk/sk/cestovanie_a_konzularne_info/staty_sveta.

SOME BACKGROUND ON THE STRIKE:
An interview with our member working in the education sector from September 2012:
http://www.priamaakcia.sk/Warning-strike-in-the-education-sector-in-Slovakia---two-interviews-with-a-member-of-Priama-akcia-IWA-Slovakia.html 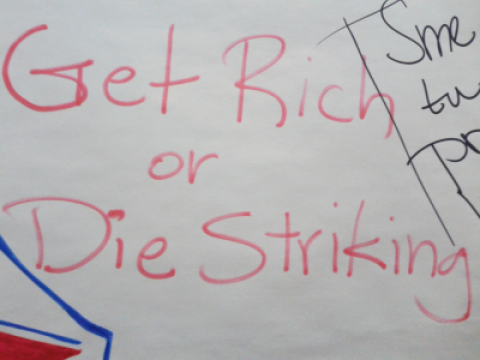 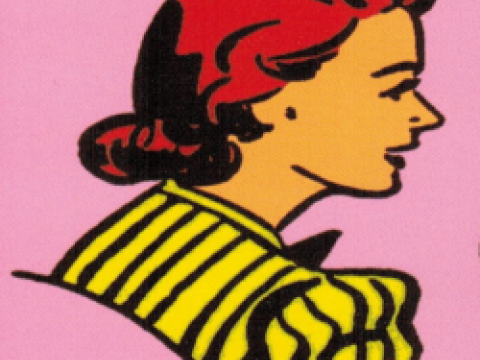 On Thursday 13th September 2012, a one day warning strike was organized in the… 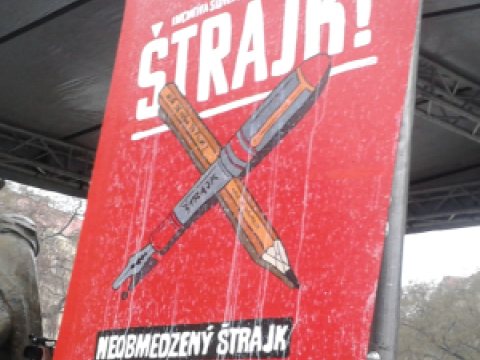 Teachers in Slovakia have begun an indefinite strike today. They demand higher wages, more money to be invested into education and changes in the…