Amongst the Rubble: a look at the Christchurch Earthquake from the Bottom Up

While the dust settles and Christchurch recovers from the 7.1 earthquake, people have begun to pick up the pieces and get on with their lives. But for many working class people this is not so easy.

Those most affected by ‘natural disasters’ — whether by the tsunami in the Pacific, earthquakes in Haiti, Chile and now Christchurch, NZ — are those already on the margins of despair.

As the impact of the quake became known we saw the authorities rush to ‘lock down’ the CBD, and after a short time brought in the military in a quasi ‘martial law’ scenario. With the aid of the corporate media and using the odd collapsed and damaged building as a backdrop, a sensational picture was painted of a city in ruins. Their reports were far from helpful — heavily recycling dramatic images while providing little concrete advice and information for those of us on the ground. It was hard to not to get the feeling that it was little more than a ratings seeking adventure at our expense.

Out in the worst affected suburbs people waited for days to receive help from the authorities. While the state hurried to safeguard inner city property, people in the outer limits were left to fend for themselves. Many acts of mutual aid were carried out, with friends and neighbours ‘mucking in’ — firstly to make sure everyone was safe and then supporting each other with what they could to survive. Some shopkeepers offered free milk, people offered water from private wells, and with the University closed students organised themselves into solidarity teams (numbering over 1000 in total) and went about helping those in an inspiring display of mutual aid.

However reports are coming to light of a number of abusive and oppressive scenarios. Workers have been forced to work in unsafe conditions or told to stay home without being paid. First Security, Subway and the Readings Cinema have all put profits before people in a blatant disregard of the interests of their staff. Equally concerning is the example of a Welfare Centre that in a blatant act of racism evicted a large Maori whanau who were seeking comfort, support and refuge in a facility set up for this purpose ('freeloaders' was the term used).

Many people have lost everything and many stories are now being told of residents of rental properties having to stay in dangerous and substandard housing with nowhere to go, as greedy landlords refuse to subsidise rent, make repairs or break fixed-term lease agreements. There was also one case where the City Council evicted residents from council flats without any notice and are refusing to allow occupants to access their belongings, leaving them homeless, penniless and with only the clothes on their backs. All this is ongoing, as are the aftershocks.

Women have once again copped the worst of it. Cases of domestic violence have skyrocketed while earthquake tremours continue, adding to the already heavy trauma associated with the quake, aftershocks and school closures.

We should not be so hasty to lump praise on the State just because it showed a helping hand in a time of need, a hand in the service of the biggest disaster of all — capitalism. Nor should we ignore the draconian measures the state has recently passed. The Canterbury Earthquake Response and Recovery Bill gives a single Minister (Brownlee) the power to repeal or modify practically any law on our statute book, without even having to refer to Cabinet, let alone Parliament. This Act was voted in by all Parties in the House, which shows more than ever the true motives of our supposedly neutral state: increased power for the few, a privileging of property and an emphasis on order (ie business as usual).

While Civil Defence volunteers and Emergency Services did a good job with the organisational structures they had to work with, questions should be asked as to whether a more co-ordinated but decentralised approach could have brought more relief to those out in the suburbs. One alternative could be a model of community resource facilities run the people themselves, acting as a hub — not only for disaster relief and mutual aid — but as a genuine decision making space that truly enables people in their neighbourhoods to organise collectively to best meet their needs. There are plenty of examples worldwide of such resources being directly controlled and self-managed by those involved via regular assemblies, and these models could equally apply to such national networks such as Civil Defence.

As time goes by many more stories will be told, and we hope they will add to the positive examples already around us. The most spectacular thing that always comes out of these situations — more than damaged buildings or 'live on the scene' reports — is the ability of people to help one another. Solidarity and mutual aid has largely formed the foundation of people's distrupted lives over the last week or so, and shows us that these principles are in fact evident in human nature, however suppressed they currently are by the competition and consumption of our modern environment (an environment in which the State plays a major role).

For those of us in Christchurch who have lived through this experience, who huddled in doorways, shoveled silt, and witnessed first hand the real beneficiary of the state's response (inner city property), life goes on. For most, it will never be the same again.

As I posted this we had about a 4.5 aftershock.... creepy stuff!

It's a really interesting article, and certainly fits with some of the stuff I've been hearing from other folks down your way Jared. Much love and solidarity to all of you down there :)

great account and thanks for your perspective! when informing about the earthquake Slovak media (and I believe elsewhere) didn't forget to mention looting. so you have like 4-5 sentences being said about the situation with some pictures and one of it is that looting has occured. amazing...

Yeah and to be honest there was next to no looting: it was really played up. Some break ins did occur, but it was residential and far from mass looting. The media (and politicians) have made real capital from this — it's quite disgusting (but typical). 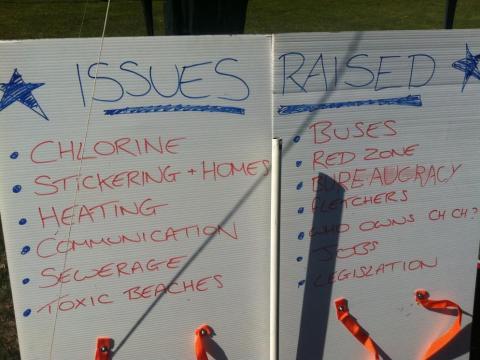 Community Assembly in Christchurch (NZ): the fight back begins

Summary of a public assembly held in Christchurch, New Zealand, to organise the direction of…
Image

Some (more) thoughts on activism, class struggle and material needs

A personal account of activism, class struggle and organizing around material needs by Jared…
Image 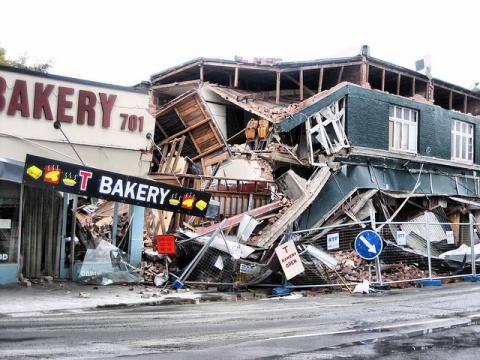 On February 22nd at just before 1pm, a devastating earthquake, measuring 6.3 on the…
Image 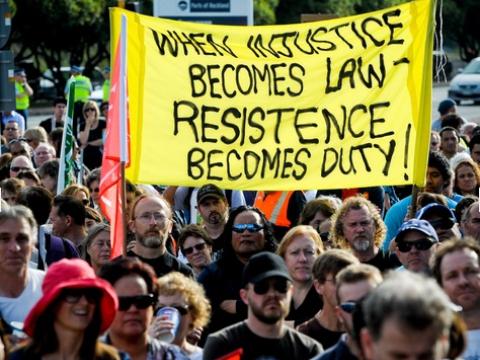 Workers at the Ports of Auckland have been on strike this week, with solidarity actions spreading…