Article by the New York Times detailing a meeting held by Anarchists and members of the Industrial Workers of the World to build resistance to the American participation in the First World War.

Great Gathering of I. W. W. and Other Agitators Rails Against Selective Draft.

GERMANS IN THE AUDIENCE

The Harlem River Casino, at 126th Street and Second Avenue, was the scene last night of a wild anti-conscription demonstration, in the course of which the Government of the United States was denounced and referred to as a tool of the capitalist classes. Young men liable to military service under the selective draft act were urged to defy the Government and refuse to serve if called to the colors. A general strike on the part of all working people as a protest against the entry of the country into the European war, and a nation-wide campaign to frustrate the efforts of the Government to raise armies for the defense of the country's rights would be among the things the future has in store for the country if those who packed the Casino had their way. An appeal to the workingmen to follow the example of the Russians and form a workingmen's committee to run the country was also urged.

The meeting was addressed by anarchists, I. W. W. agitators, and persons who styled themselves Socialists. Emma Goldman was one of them. Alexander Berkman, who served a term in the penitentiary for attempting to assassinate Henry C. Frick, was another. Leonard D. Abbott, well known as an I. W. W. sympathizer, was another. Harry Weissberger, who says no power on earth can make him fight, was another. Also present and among the talkers was Leonora O'Reilly, while among those listed but who did not speak was Carlo Tresca, the Italian I. W. W. leader, and Jacob Panken.

Outside the building and inside were about 100 policemen, who had been instructed to preserve order. They made no arrests, although rumors flew about the hall that an arrest was impending, especially while Emma Goldman was talking. She was the one who predicted a nationwide strike to embarrass the Government and denounced the authorities in Washington as being on a par with the old powers in Russia. She begged the audience to make no hostile demonstration should anybody try to create disorder by "waving the American flag."

Two police stenographers, sitting in the gallery, took down every word said by the speakers. These notes will be gone over today, and, if a digest of the speeches seems to warrant it, action against the speakers may be taken, either by the police or by the Federal authorities.

As each person entered the hall, he or she was presented with two circulars. In one, captioned "No conscription," the "No Conscription League," of 20 East 125th Street, exhorted young men to resist the enforcement of the selective draft. The other was an appeal to the workers of the country to follow the example of Russia and form a Council of Workers to act with the Council of Workmen's and Soldiers' Delegates of Russia against the war.

According to the public announcement of Emma Goldman, the meeting was not financed by German money. "The Kaiser," she shouted, "has not put up a cent for the cause." However, there were many Germans in the audience. An interested onlooker was former Coroner Gustav Scholer. Dr. Scholer had a seat in the wings of the stage, out of the view of the audience.

When Elihu Root's name as head of the American Commission to Russia was mentioned by Emma Goldman, hisses came from every part of the hall.

Weissberger, who talked first, spoke until he became so hoarse he had to quit. After him came Louis Frana, introduced as a Socialist of nation-wide prominence. He said the motto of all the people should from this on be, "They shall not conscript." He referred to the Wilson Administration as "the government of the classes, which is introducing into this country a system of government which, among other things, seeks to destroy individual liberty and expression of thought."

Frana said the war was not a war for democracy, but a war to protect the war profits of the ruling classes. As he spoke somebody shouted that "it was a dastardly lie" to say that the United States went to war to save democracy, whereupon everybody, it seemed, shouted his or her approval.

The document circulated among those in the audience calling for a workmen's council in America in part read:
Fellow-workers of the United States, why don't you do the same thing here that your brother-workers are doing in Russia? Why shouldn't the same "wonderful and heartening things that have been happening in Russia" begin to happen right here? Are we workers of America going to let the workers and soldiers of Russia do the only wonderful and heartening things that are being done? President Wilson has said that America stands supremely for peace. And yet today the only place in Christendom where a single step is being taken toward peace is RUSSIA. War has come to a standstill in Russia. The Russian workers are seeking for peace in this world.

Workers of America, what are you going to do? It isn't enough for you to refuse to fight, to resist conscription, to denounce the Government. It is the business of American workers to do what their Russian brothers have done. The only enemies American workers have are in America, are the men who have taken the land, who are taking enormous profits from their toil, and who have them imprisoned or shot when they rebel--as has been done in West Virginia, in Colorado, in California, in Massachusetts, in a thousand places where the workers have rebelled against slavery and injustice.

Let the workers of the United States at once follow the "heartening" example of their Russian brothers and form a nation-wide "Council of Workers," which shall work hand in hand with "the Council of Workmen and Soldiers" in Russia against a war that cripples or kills millions of working people and enriches a few capitalists, and inaugurate here, as in Russia, the reign of freedom, justice and peace.

The purposes of the No-conscription League were set forth in its circular in part as follows:
"We oppose conscription because we are internationalists, anti-militarists, and opposed to all wars waged by capitalistic Governments. We will fight for what we choose to fight for, we will never fight simply because we are ordered to fight.

"We believe that the militarization of America is an evil that far outweighs, in its anti-social and anti-libertarian effects, any good that may come from America's participation in the war.
"We will resist conscription by every means in our power, and we will sustain those who, for similar reasons, refuse to be conscripted.
"Resist conscription. Organize meetings. Join our league. Send us money. Help us to give assistance to those who come in conflict with the Government. Help us to publish literature against militarism and against conscription."

Other meetings similar to that of last night will b held in other parts of the city shortly, it was announced.

Found this on wikisource https://en.wikisource.org/wiki/The_New_York_Times/Anarchists_Demand_Strike_To_End_War

We believe that the militarization of America is an evil that far outweighs, in its anti-social and anti-libertarian effects, any good that may come from America's participation in the war.

Circular of the No Conscription League 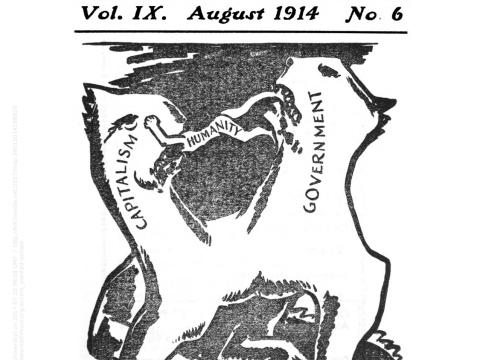 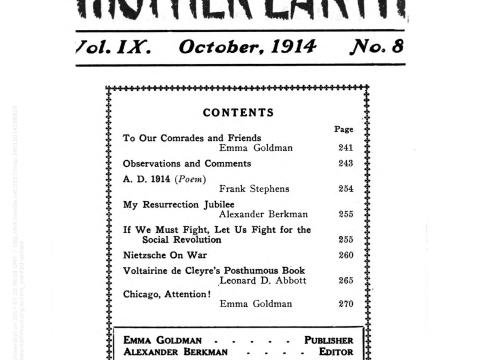