Following harrassment and abuse of political prisoners in Oaxaca, a hunger strike has commenced for their liberation.

Compañeras and compañeros of all the organisations, collectives and individuals of Oaxaca and the World, of the Other Campaign, of National and International Human Rights Organisations, to the communication media, to the members and sympathisers of the APPO in Mexico and the World.

Following the removal operation and the beatings recieved, PEDRO CASTILLO ARAGÓN and VÍCTOR HUGO MARTINEZ TOLEDO have since (at different times) been returned to the Central Penitentiary of Santa Maria Ixcotel, Oax. AS OF THURSDAY 27TH NOVEMBER, AT 21:00 PEDRO CASTILLO HAS BEGUN A HUNGER STRIKE TO DEMAND FREEDOM FOR HIMSELF AND THE OTHER POLITICAL PRISONERS OF OAXACA.

In response to the facts of yesterday in the Central
Penitentiary of Santa Maria Ixcotel, where without explanation, PEDRO CASTILLO ARAGÓN and VÍCTOR HUGO MARTINEZ TOLEDO were removed from the location, we wish to update information and and make some clarifactions:

The two compañeros were removed from the penitentiary yesterday, in the morning of Thursday 27th November 2008 during an operation beginning at 07:30 and ending at approximately 13:00. Víctor Hugo Martínez Toledo was beaten and then returned to the Penitentiary a few hours later. Pedro Castillo Aragón was disappeared for several hours and was beaten worse, before being presented at the prison of Miahuatlan,Oaxcaca. Today, Friday 28th November at approximately 15:00, compañero Pedro Castillo Aragón was returned to the Central Penitentiary of Santa Maria Ixcotel. Currently, both compañeros remain in Ixcotel.

Since yesterday there have been mobilisations taking place to demand guarantees for our compañeros. Following the uncertainty generated by the operation and its affects on the families of political prisoners and other prisoners, and after an assembly of family members, friends and participants in the APPO movement, two actions were agreed. The first, yesterday night was a march that left the building of Section 22 (of the Teachers’ Union) for the Federal Courts as well as the blockade of avenida Juárez in order to hold a press conference and meeting for the appearance and liberation of our compañeros. Today, at 09:00 a second blockade took place in front of the Federal Courts. In this action, there was harrassment on the part of elements of the Federal Preventive Police, all armed, who attempted to cross the blockade with their vehicle; nevertheless, they were forced to respect the demonstration. These actions have merely provoked the mobilisation of those of us who demand justice and freedom for the peoples of Oaxaca and an end to the criminalisation of social protest.

It is important to show that as a result of these actions, compañero Pedro Castillo Aragón yesterday, Thursday 27 November at 21:00 began a hunger strike to demand his freedom, that of Víctor Martínez Toledo and of Miguel Ángel García, political prisoners of the APPO since the 3rd of November 2006. Also for the liberation of the political prisoners of San Agustín Loxicha, Santiago Xanica and San Pedro Yosotatu.

Nevertheless, we know that these repressive actions on the part of the State are politically motivated and in line with the interests of the despotic government of Ulises Ruiz and with the obvious complicity of the Federal Government. These people hope to demoralise our imprisoned compañeros and put them under a repression even greater than that to which they have been subjected for the two years in the case of Víctor Hugo and nearly six in that of Pedro Castillo Aragón in which they have been unjustly imprisoned. In this way, the authorities hope to make current their message of repression against the people of Oaxaca and their political prisoners and prisoners of conscience.

Owing to the size of the operation, the details and the current situation of repression both inside and outside of the Pentitentiary,we fear for the the physical and emotional wellbeing of our political prisoner compañeros.

We hereby express our indignation at this operation that violates fundamental rights to put in danger the integrity and security of our imprisoned compañeros and take them from one place to another as if they were criminals.

Guarantees from the Interior of the Penitentiary, to care for the physical and moral integrity of our imprisoned compañeros!

The immediate and unconditional liberation of all the political prisoners of Oaxaca! 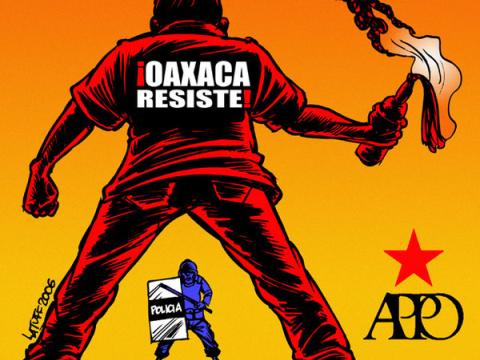 Rebels without a pause

In May 2007, Freedom correspondent Nancy Davies reported from Oaxaca one year after the Mexican rebellion began, and found dissent alive and well…