FACTS:
Tonight, Saturday 10th January at approximately 10:57 at night, our comrade RUBÉN VALENCIA NUÑEZ and another person were walking on the street Porfirio Díaz, headed for the politico-cultural space ‘CASOTA’, found at 408 Crespo, in the centre of the city of Oaxaca. A number of persons (aprroxiamtely 3), on board a moving vehicle, colour electric blue and apparently a Peugeot began to shout insults. One of them shouted “Fucking APPO” in the direction of comrade RUBÈN., amongst other things. One then attempted to exit the vehicle but was dissuaded by the others not to do so before the vehicle continued on, stopping about a block away.

Faced with this situation, the comrades continued walking and took refuge in a café on that same street. Only five minutes after arriving and whilst comrade RUBÉN VALENCIA NUÑEZ was in the bathroom washing his hands, the same person who had shouted at him in the street entered the premises full of people, and installed himself next to the bathroom with our comrade inside it. Without any exchange of words he produced a sharp, stabbing weapon and between pushes and shoves, aimed three blows at our comrade at the level of his neck, nape and head, causing three wounds. At this time the comrade only felt the blows (not realising they were wounds) as due to the pushing he had exited the bathroom area with the aggressor. During the confusion a waiter was caught up and was wounded in the neck by the same weapon.

The attacker, approximately 28, robust and with short hair (of the style common to the ministerial or judicial Police) remained blatantly barefaced in the place for several seconds more before later retreating, leaving behind the weapon. It was at this point that our comrade became aware of his injuries due to the blood that was quickly staining his clothes.

The comrade was taken to hospital to be attended to and is now out of danger. The wounds were: one cut, approximately 3.5cm long and 1cm deep at the nape of his neck. Another, approximately 3cm long and 1cm deep also in the neck, damage from a blow to the head and a scratch from the left eye to the ear, along with other scratches from the same weapon. Six stitches were needed in each wound and it must be noted that one wound was only 1cm from the jugular vein, which would have had fatal consequences had it reached it. The waiter was admitted with a neck wound by the same weapon, at to which we are unaware of the gravity.

We firmly denounce the acts as part of a strategy of repression and violence orchestrated by the government of the state of Oaxaca, but carried out through parapolice groups or civilians in the service of that same state. For this we denounce to the entire world the possibility of the initiation of a selective repression, in the style of the dirty war suffered by the social movements of this country thirty years ago. The aggression suffered at this moment by comrade RUBEN comes at the head of a string of aggressions, intimidations and detentions against different comrades in the social movement over recent months, and whilst none of which have been successful, demonstrate the authoritarian and illegal acts of the State that continue with this latest aggression, which may signal a new and yet more dangerous type of governmental repression and violence carried out by parapolice, paramilitaries and thugs in the service of the bad government of ULISES RUIS ORTIZ, in the style of a dirty war.

WE DECLARE:
-Our decision to continue on our path of building a different Oaxaca, where those who seek justice for the people are not repressed and where assassins are punished. A Oaxaca in which it is possible to live without fear or repression.
-These acts demonstrate the urgency of the need for change and the necessity to continue forward so that in the future murderers will not govern.

WE DEMAND:
-An end to the criminal strategies of repression and intimidation against the different struggles of the peoples of Oaxaca on the part of the Mexican State and the State Government.
-Respect for the life and peace of each of those comrades of the people of Oaxaca who continue building alternatives, for a just, dignified and free life.
-Punishment of those responsible for this action against comrade RUBÉN VALENCIA NUÑEZ.

We respectfully request that the peoples of Mexico and the World to be attentive of this situation that Could mark the beginning of a strategy of Dirty or Low-Intensity Warfare against the legitimate movement of the peoples of Oaxaca.

As a reaction to the attempted murder detailed above, Section 22 of the Teachers Union has announced that it will blocakde roads and completely shut down the city of Oaxaca on the 16th. More news as it comes.

Statement of the CGT

In the General Labour Confederation (CGT), we respond to the brutal attempted murder of the VOCAL comrade Rubén Valencia Nuñez at the hands of paramilitaries last Saturday, 10th January in the City of Oaxaca. We express our repulsion toward all governments, institutions and organisation that attempt to threaten and destroy the social processes of radical democracy that are generated in Oaxaca and based on the autonomy and communality of its original peoples.

These direct acts of violence are responsibility of politicians, specifically the figures of Ulises Ruiz Ortiz and Felipe Calderón Hinojosa, both of whom promote from their distinct positions, the militarisation of Mexico, with the goal of guaranteeing confidence and investments of economic Powers such as the United States, Spain and the European Union.

In the CGT we remain alert over the coming hours to the evolution of events and announce our willingness to support the initiatives presented to protect the members of the organisations and spaces that participate, in Oaxaca, Mexico and the World, in the social struggle for the transformation of society through self-government and self-regulation.

A solidarity caravan travelling to the autonomous municipality of San Juan Copala in the Triqui Region of Oaxaca has been attacked by UBISORT paramilitaries. Two are confirmed dead, with at least 15 injured and three missing.

The annual teachers' strike in Oaxaca has been bolstered by soldarity strikes of other sections of the Sindicato Nacional de los Trabajadores en la Educación (SNTE) stretching up and down the Mexican Pacific coastline, while in Oaxaca itself, occupations and blockades continue apace in support. Most analysts however have already doomed the strike to failure.
Image 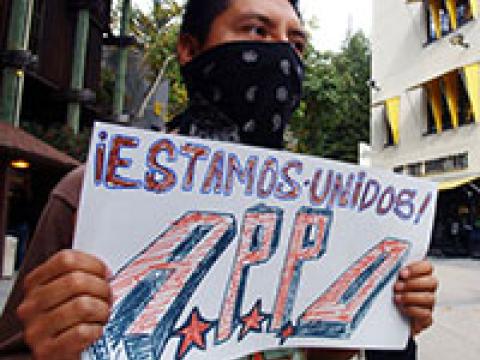 Following harrassment and abuse of political prisoners in Oaxaca, a hunger strike has commenced for their liberation.