This pamphlet was produced to make available information about the massive working class revolts in Argentina in 2001-2. These struggles were probably the most important action of the global proletariat in recent years. In time what happened in Argentina will come to be seen as an event of similar importance to May 1968 in France when 10 million workers went on wildcat strike for three weeks.

Sadly since these articles were written the situation in Argentina has been stabilised in favour of capital. In April 2003, just before the Argentine presidential election the iconic worker-controlled Brukman textile factory in Buenos Aires was violently evicted by the police. In the presidential election eighty percent of those eligible cast valid votes up from a mere sixty percent in the previous election in 2001. This probably represents something of a resigned return to acceptance of the old world after the failure of the insurgent movements to advance in their creation of a new one.

The two main components of the 2001-2 movements have been demobilised in different ways. Most of the “middle-class” depositors who lost their savings have been reimbursed. The radical wing of the unemployed movement faced state repression while the rest has been reduced to administering the miserly dole with recipients not paid unless they attend the now tokenistic road blockades. The employed members of the working class for the most part never joined the revolts preferring to keep their heads down and not risk their jobs.

In 2005 unemployment is nearly 20% and underemployment 15%. Average wages are less than the official poverty line and inflation is expected to be 20% over 2005. In response to this poverty new workplace movements have emerged demanding and sometimes winning a six-hour day in order to increase employment, a minimum wage and freedom for political prisoners. However this is a far cry from the insurrection of December 2001.

South America as a whole has been in turmoil for the past five years with the overthrow of the Bolivian government in June 2005 by peasant and proletarian revolt showing that the continent is not yet safe for investment. An important next step for insurgents in South America would be the breaking of the isolation of struggles within national borders.

"‘Picket and Pot-banger Together’: Class Re-Composition in Argentina?” first appeared in the 2002 issue of the excellent annual British communist magazine Aufheben and seems to have been completed in late September 2002. Aufheben have a website at www.geocities.com/aufheben2

“Report from Argentina” was written by an anonymous communist from Britain, in December 2002.

“A Conversation with MTD Solano” is an interview with piqueteros from Buenos Aires by the Argentine Marxist group Colectivo Situaciones.

“Clausewitz on the Pampas: An Argentine Snapshot as Latin America Moves Leftward” is American communist Loren Goldner’s account of his visit to Argentina in February 2006. Goldner has a website with many of his interesting articles at: http://home.earthlink.net/~lrgoldner/

This pamphlet was first published by Treason Press in December 2003. The introduction was rewritten in July 2005 and this edition with the Goldner article added was done in October 2006.

Looks like I was wrong about the revolt in Argentina being remembered as significant as Mai 68. Instead it seems to have been largely forgotten.

Oh to be young and exciteable again.

A paper by Maurizio Atzeni looking at the degeneration of four co-operatives that arose during the upheavels in Argentina 2001. 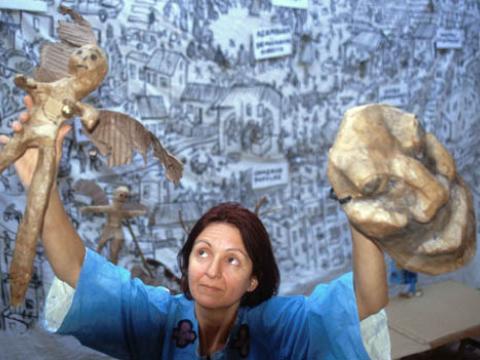 An interview with a piquetera - "If the aggression is globalised then the resistance needs to be globalised."

In June and July of 2003, two Argentinian women toured the UK to talk about the…