A brief history of the crisis

A concise background to the current financial crisis and recession.

However it may seem, the current crisis didn’t come out of nowhere. Following WWII, the government and employers were keen to appease a population weary from years of war and rationing. The NHS was founded in 1948, and the opportunity for a reconstruction boom created the possibility of ‘productivity deals.’ These were agreements between employers and the unions for workers to implement productivity improvements in return for a share of the profits in the form of higher wages.

This settlement lasted up until the late 1960s, when two factors converged to derail it. Firstly, there was a growing wave of industrial unrest with strikes and other forms of action rippling out around the world. Many of these took the form of wildcat action outside of union control. Workers were fed up with years of producing more and more while their lives were still reduced to work, as all that extra productivity hadn’t led to shorter hours.

The second factor was the end of the post-war boom, which saw economic growth slow dramatically – making productivity deals unaffordable if profit levels were to be maintained. It also saw rising inflation eat away at the wage improvements over the last decade, adding fuel to the fire of workers' militancy. The struggles of this period were highly successful, with workers winning large concessions. However, this set the stage for a concerted counter-attack.

At the end of the 70s, Margaret Thatcher came to power in the UK on a mission to break the working class. Reagan soon followed in the US. Both of them isolated and took on workers sector by sector, doing deals with some unions while attacking others in a divide and rule strategy. The decisive defeats were the miners’ strike of 1984/5 in the UK, and Reagan’s attack on the air traffic controllers in the US in 1981. These are defeats from which we’ve yet to recover.

With workers broken, Thatcher and Reagan set about a series of reforms which set the scene for today’s crisis. Firstly, old centres of workers' militancy (mining, manufacturing) were systematically dismantled and outsourced to low-wage economies overseas. Whereas in the UK in 1971 over 70% of people were employed in primary industries (like mining) or manufacturing, today over 70% of workers are in the service sector. Secondly, the banking sector was massively deregulated, allowing the creation of all sorts of complicated ‘derivatives’ markets, which ultimately resulted in the credit crunch as it proved impossible to know what all these pieces of paper were really worth.

An effect of breaking workers' militancy was of course to keep wages down, and we’ve all got used to sub-inflation pay rises every year (in other words pay cuts). While this boosts profits, the problem with this is that it keeps consumer spending - and thus economic growth - down, since you can’t buy lots of things when you’re skint. Unless of course you get a credit card. So this problem was ‘solved’ by extending massive consumer credit, based mostly on rising house prices, to provide the spending power to purchase all those commodities coming out of the new manufacturing centres in the Far East and elsewhere.

Parallel to this, without primary industries or manufacturing the economy came to rely more and more on the banking and financial sector, with the ‘square mile’ of the City of London alone accounting for around 5% of the UK’s economy. This sector was also now heavily reliant on rising house prices, with complicated ‘mortgage derivatives’ being one of the major assets held by the big banks. Of course when the housing bubble burst, everything started to unravel. Household name banks teetered on the brink of collapse, as did the entire financial system. Credit dried up, and with it the economy swung into recession.

There is much talk comparing it to the collapse of 1929, except nobody knows how bad it’s going to get, and this time it’s global. Already there have been riots by workers laid off from thousands of factories in China, and food riots across the globe as food prices rise much faster than incomes. This then is the context for the coming ‘claw back’ attacks on our living standards that are set to try and make us pay for a crisis that was not of our making.

Written for the Tea Break bulletin in December 2008.

An analysis of the use of inflation to attack workers' conditions. 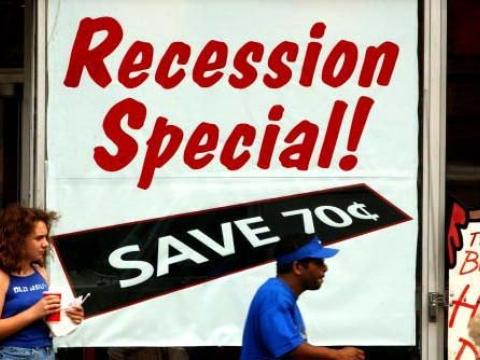 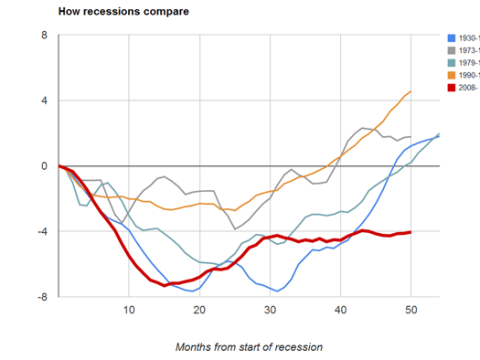 Why can’t anybody say ‘depression’?

This is a short blog inspired by the news that the UK is officially in ‘double-dip’ recession (as predicted by pretty much everyone on the left).

A debate between Iain McKaye and the libcom group about an adequate workers' response to the credit crunch - should we advocate nationalisation,…