A brief review of Zones of Proletarian Development - (Jennifer Ryan)

The potential of proletarian interaction - as we enter the "surreal phase of capital's domination"...

The book can be bought online from Mute magazine, Amazon UK, and Blackwell.

This is the most unusual book I have read in a long time. On a first reading, almost every page contained a comment that I strenuously disagreed with as well as an insight that completely overturned a cherished belief. A second, more nuanced reading overcame most of my initial objections but added new puzzles. Both the content and style of presentation are calculated to provoke a reaction from the reader. And the shift from psychology to politics, academic text to radical literature is achieved with an impressive array of techniques.

So what is the book about? Well, first and foremost it is about the class struggle. To put it in Shah-Shuja’s own terminology, it is about the simultaneous study-extension of the class struggle. The work describes the ideal way of creating autonomous zones of proletarian activity for resisting capitalism and abolishing private property (in all its formats) as well as the state. It is very difficult to classify the author’s politics. Initially, given her hostility toward bolshevism, social democracy, fascism, liberalism and anarchism, I pegged her for a left-communist, autonomist or situationist. A closer reading, however, suggests she is almost as critical of the latter cluster of ideas. Perhaps it is best not to label her politics at all. Suffice it to say the old paradigms of modernism and postmodernism and the various political tendencies that provide most of us with a safe, cosy identity come under sustained and uncomfortable attack throughout.

The first chapter charts the failure of the proletarian movement and recent seminal defeats (I think by proletarian she means the majority of people in society). It then provides a take on capitalism that I find very refreshing. There is an attempt to extend Marx’s periodisation of capitalism. Shah-Shuja believes the formal and real phases of capital’s domination are going to be supplanted by the surreal phase. Sadly my knowledge of political economy is not what it should be so I cannot comment on the veracity of her claims but I find the idea of a surreal phase of development intriguing. She also believes proletarians who are already engaged in both material and immaterial production will come to produce hyper-materially as well. This concept is not fleshed as well as it should be but I understand it to mean the application of biotechnology and cybertechnology to labour power and its implications for wealth generation. She also explains how this crisis-ridden transformation has created a more authoritarian bourgeois ideology which combines elements of liberalism with fascism.

The second chapter is all about methodology. This is the one issue I usually give a miss, after all who cares about methodology?! But in this case I am glad I persevered because Shah-Shuja is trying to cobble together here an approach to the study of the social movement which looks at everything from the standpoint of the working class. She claims this methodology is not only advantageous to the proletariat but a superior mode of investigation compared to its bourgeois counterparts. Again readers will have to make up their own mind since methodology is another one of my weaknesses.

The next three chapters are case studies. She looks in great detail at recent May Day celebrations in London from a Vygotskian perspective. Lev Vygotsky was a Russian thinker who did some interesting work in psychology. As an activist who took part in these events I find Shah-Shuja’s analysis extremely useful. Extraordinary events like the Mohicanisation of Churchill’s statue are discussed cleverly. She describes how demonstrations that go beyond the routine can become the perfect vehicle for the development of participants –zones of proletarian development- and how these zones come to resist the state.

Then using the work of Bakhtin (another Russian thinker who as I understand has become very fashionable in recent years) she interprets a cycle of football riots in Iran as examples of radical carnival. This is quite fascinating stuff, although I have a sneaky suspicion it is also a bit overoptimistic in its predictions. The images certainly bring the text to life and add layers of meaning. I found this chapter a bit of an eye-opener.

Another recent event, the famous February 2003 anti-war demonstration, is the subject of the last case study. Here Shah-Shuja uses an ideology called Activity Theory to investigate all the dimensions of this great demo. I had heard of Activity Theory before but only briefly so it was good that all the terminology was defined succinctly. The diagrams make the analysis easier to follow. This chapter throws light on the emotional aspects of political activity as well as the relationship between religious and secular anti-war demonstrators. Exactly the kind of stuff that get left out of discussion most of the time!

The last chapter is the most political and perhaps the most important. Here Shah-Shuja employs many concrete examples from actual existing organisations to draw a contrast between what she calls a zone of bourgeois development and a zone of proletarian development. A host of radicals and reactionaries are discussed to flesh out this dichotomy. People like Lenin, Kautsky and Hakim Bey are discussed as promoters of the zone of bourgeois development. By contrast individuals like Pannekoek and Cardan and groups like Kamunist Kranti are analysed as contributors to the zone of proletarian development. Looking back at my own experiences as an activist, I find this chapter the most useful of all since it explains with clarity why so many organisations fail to live up to expectation. This is ground-breaking stuff.

I would like to end this review with just three criticisms of the book: first, Mastaneh Shah-Shuja is too well read. There are at times too many ideas, concepts and examples jostling for the reader’s attention. This makes some sections of the book obscure; second, some of the most innovative ideas in the book are sketched out only briefly. For example, I would have preferred a bit more detail on the surreal phase of development and hypermaterial production; and finally, the book is well structured and designed but the lack of an index is a serious shortcoming which should be remedied in future reprints.

Despite these reservations, I think Zones of Proletarian Development is the best book I have read for ages. I recommend it heartily to all those who are serious about the study-extension of the class struggle.

Postal workers and supporters held a march and rally at lunch time today. Over 400 posties and supporters marched from the Shankill Road across the peace line at Lanark Way on to the Falls Road.
Image 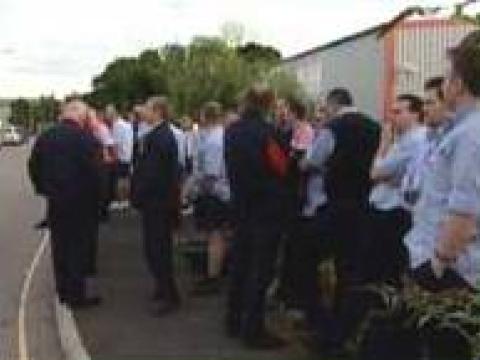 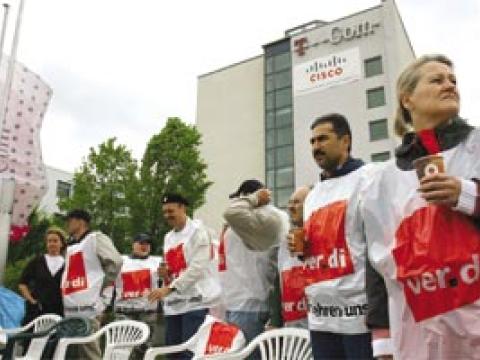 Labor union ver.di says that operations at Deutschen Telekom have been severely hampered after one week of strike.
Image 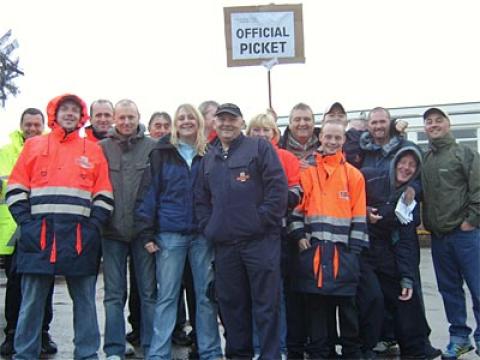